MBA&M IS PROUD TO SPOTLIGHT….

The Meet Me at the Cupcake Café Sugary Sweet Spotlight!

It is no wonder that the flirty and frothy food-themed novel, Meet Me at the Cupcake Café by Jenny Colgan is an international success: with relatable characters and scrumptious recipes at the start of each chapter, Meet Me at the Cupcake Café is pure delight to women’s fiction readers everywhere. This summer, Colgan is bringing her hilarious and heartfelt stories—with a dash of deliciousness—to the United States! To celebrate, Sourcebooks is giving away copies of this book ALL MONTH LONG!

Each day this month, look for opportunities to win a print copy of Meet Me at the Cupcake Café with bloggers all over the book blogging community. Additionally, there will be a few guest blogs and interviews with Jenny sprinkled throughout—a great way to get to know a new author!

Meet Me at the Cupcake Café by Jenny Cogan

Baking is in Issy Randall’s blood. Growing up above her grandfather’s bakery taught Issy that a delicious pastry could make any day better. So when she’s laid off from her desk job—by the man she thought was her boyfriend, no less—Issy knows now is the time to start her own little café.

Armed with her grandfather’s tried and true recipes, as well as her own new dishes, Issy’s new dream job should be a piece-of-cake, right? But managing a café, delivering products on time and trying to have a new love life aren’t exactly going as Issy planned. And when her ex comes back into the picture, perhaps with his own motives, Issy’s search for the perfect pastry and a groundbreaking idea to save her café are much more than she bargained for…

ABOUT THE AUTHOR: Jenny Colgan was a fussy eater as a child and didn’t even begin to learn to cook until she was 21, when her then boyfriend tried to teach her a few basics purely out of exasperation. While she is now able to make a variety of good, wholesome food for her family, she still can’t make scones. A former columnist for The Guardian, Jenny contributes regularly to national BBC radio and is the bestselling author of more than eleven novels, including The Loveliest Chocolate Shop in Paris (coming out in the US in early 2014). She is married with three children and lives in London and France. For more information, please visit http://www.jennycolgan.com/ and follow her on Twitter, @JennyColgan.

Thanks to Sourcebooks, we are offering 1 print copy of “Meet Me at the Cupcake Café “by Jenny Cogan to 1 lucky commenter. Giveaway open to US and Canada residents only. Giveway will run from August 9 until August 16,2013.

THANK YOU AND GOOD LUCK!

WHAT A GREAT PLEASURE TO HAVE WITH US TODAY….. 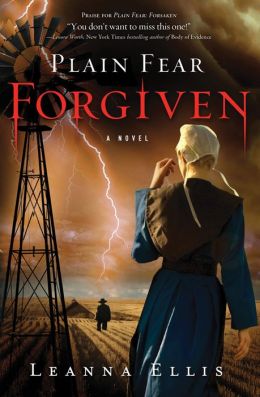 MBA&M: Please tell our readers a little about Leanna Ellis?

Leanna: Hi! Thanks for having me here today! I’m a wife, mother, writer, and taxi driver (which is code that my kids aren’t old enough to drive yet). I spend a lot of time on the road, sitting outside kid activities in my car, while my kids are singing, dancing, acting, and fencing. Yes, I allow one of my children to play with swords. So while I’m waiting for them, I’m playing with my characters, writing on my laptop, and revising.

MBA&M: What was your inspiration behind the Plain Fear Trilogy?

Leanna: It all started with a joke. I was signing books at a multi-author event and the biggest sellers were the vampire and Amish books, so I told a friend of mine we should write an Amish/vampire story. We laughed. But a seed was planted in my brain and soon a character was rattling around in there, poking me, trying to tell me his story. And like most characters, he wouldn’t be quiet. This was not a series I wanted to write and I tried to not write it for a long time. But I fell in love with the heart of the story and with the characters, so then it became a compulsion. Thankfully, when I approached my agent, she loved it, and so did my editor.

MBA&M: What inspired you to write a chilling, compelling story with Vampires, Amish, danger, revenge and a bit of romance and love thrown in?

Leanna: I happen to love all those things. I didn’t set out to include them all, but they were organic to the story. Way back in my college days, I wrote a paper about the Amish. They intrigued me. But I’ve never read many of the popular Amish novels out today. I always tend to think outside the box, sometimes way, way outside the box. Apparently vampires intrigue me too. I’ve read about them throughout the years in books like The Historian, obviously these are fiction novels. But also I am intrigued by the spiritual aspect of vampires, the significance of blood, etc… My idea for the Plain Fear series was based somewhat on Phantom of the Opera. I was intrigued by how a woman, such as Christine, could be drawn toward someone as dark as the Phantom. Part of the reason was Christine’s innocence. Where can you go today to find such innocence in our world? The Amish. So for my story the two genres colliding made perfect sense. I truly respect the Amish. They make hard choices and have such resolve to stick to their traditions and beliefs. It’s not an easy life. Yet, I respect their choices. But it is a choice. And each of them must make that choice for themselves. Sometimes they choose to stay, and other times they choose to leave. Neither choice is easy. For this series, I envisioned a battle between good and evil, and that battle would make my Amish characters (and even the non-Amish characters) make tough choices. But in a battle of good versus evil, the opposite of evil is love, and so romance had to be a part of this series.

MBA&M: What was the most challenging part of writing the Plain Fear trilogy?

Leanna:  Keeping all the details straight. I am not a detail person, so that was challenging for me, but also fun.

MBA&M: Which of your characters in this trilogy was the most difficult to write and why?

Leanna: Hannah, in the first book, was challenging. I didn’t think I would have anything in common with an Amish woman. But the truth is, Amish are like anyone else. They’re human. They have longings. They have hopes and desires. They have wounds. They make mistakes. Once I got past the apron and dug down into her heart, then writing her became much easier. Then it was never difficult to write about an Amish character.

MBA&M: Vampire fans enjoy a great vampire story, and adding the Amish town was an interesting twist. How did you decide to combine these two genres?

Leanna: First it was just a joke, but once the story came to me, once the characters began to emerge, it all made sense. I think stories begin on a subconscious level anyway and have more depth than our conscious thoughts first realize. In our culture and society today, the Amish still seem to live a more innocent existence, which set up the Amish districts as the perfect place for an invasion by something dark and evil. It was fun to go visit Lancaster, Pennsylvania for the first book. But when I went to visit Ohio for the second book, FORBIDDEN, I was surprised how perfect it was. It was different from Pennsylvania and really had a spooky feel, sort of like The Legend of Sleepy Hollow.

MBA&M: Last but not least inquiring minds want to know…or me anyway. What is your next project?

Leanna:  Right now, I’m working on getting three books released for e-readers. These are books that were previously published but I’ve gained the rights back to them. So those will be coming out soon! I’m also working on a new sweet romance trilogy and I’m working on a gothic, which has the feel of the Plain Fear series but minus the vampires and Amish.

MBA&M: What a pleasure to have you with us and our readers today! Please tell us where to connect with you.

Leanna: Thanks so much for having me here! Readers can connect with me on Facebook (https://www.facebook.com/pages/Leanna-Ellis/49487472434?ref=br_tf), Twitter (https://twitter.com/LeannaEllis), Goodreads (http://www.goodreads.com/author/show/992103.Leanna_Ellis), and my website (www.leannaellis.com) and blog (http://leannaellis.com/news.html)

What a pleasure to have you with us today!

Deep in the heart not only describes where Leanna Ellis lives in Texas but also the way she writes. Her books, whether romance, inspirational, women’s fiction, or paranormal, are infused with heartfelt emotion. Having written twenty published novels, Ellis has won many awards including the National Readers Choice Award and the Maggie Award.

When not chasing vampires through the darkened recesses of her mind or roping and riding along with her characters through sun-drenched plains, she stays busy driving her children to their multitude of activities, figuring out what to make for dinner (or where to order takeout), chasing her menagerie of crazy pets around the house, and researching the next idea.

What Must We Sacrifice to be Forgiven?

Samuel Fisher has committed a sin of biblical proportions—he killed his own brother, Jacob. Haunted by guilt and talked by a vampire out for his soul, Samuel starts down the same dark path of destruction that led to his brother’s death.

A captivating coming-of-age story unlike any other, Plain Fear: Forgiven pits redemption against temptation, love against fear, and simple faith against the intricacies of sin and salvation. In the gripping final battle between hunters and vampires, Samuel must choose where his loyalties lie. The lives of those he loves—as well as his own ultimate forgiveness—hangs in the balance.

“A richly detailed and atmospheric tale of suspense.” —Library Journal

“An unlikely, yet fresh idea that completely works, thanks to [Ellis’s] ability to blend the genres in a tasteful manner.” —RT Book Reviews

*Prize will be mailed directly to the winner*

Thanks to Danielle, we are offering 1 lucky commenter a set of the “Plain Fear”series. This set includes the following titles: Plain Fear: Forsaken,Plain Fear: Forbidden and Plain Fear: Forgiven. Giveaway open to US and Canada residents only. Giveaway will run from August 20 until August 27,2013.

“My Thoughts” on our sister site, www.mybookaddictionreviews.com.

Thanks again everyone for your support! He was assigned to protect her—not make her his own—in this installment of USA TODAY bestselling author Cynthia Eden’s Shadow Agents series.

Cale Lane had his orders: keep Cassidy Sherridan alive at all costs. But who sent six armed men storming the Rio ballroom to take her out? The gorgeous party girl wasn’t giving it up. Now he had a more urgent mission: uncover Cassidy’s secrets…one by one.

Cassidy didn’t need the former Army Ranger to play hero and blow her cover. Using herself as bait was the first step in bringing a killer to justice. How could she do that with Cale shadowing her every move…and awakening feelings that tempted her to put her life—and heart—on the line?

A bit about the author:

Cynthia Eden is a national best-selling author of romantic suspense novels and paranormal romances. Her books have received starred reviews from Publishers Weekly, and her novel, DEADLY FEAR, was named a RITA® finalist for best romantic suspense. Cynthia lives in the Deep South, loves horror movies, and has an addiction to chocolate. More information about Cynthia may be found on her website (www.cynthiaeden.com) or on her Facebook page (www.facebook.com/cynthiaedenfanpage).

Thanks to Cynthia, we are offering 1 lucky commenter a chance to win either a print or digital copy of “GLITTER AND GUNFIRE”. Giveaway will run from August 20 until August 27,2013.

*You MUST leave a comment on both here and on our sister,www.mybookaddictionreviews.com for the review*

Thanks everyone for your support!