#TemptationTeaser time! Cassian and the beginning of the #ClubX series are just 24 days away. Coming August 3rd! From NYT Bestselling Author KM Scott 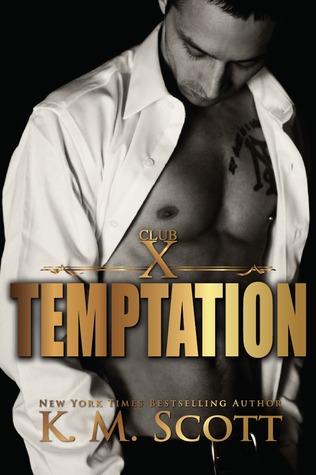 Cassian March, the public face of Tampa’s most exclusive nightspot, Club X, has a great life. Women, sex, and money are his for the taking, and no man indulges his desires more. Life is short, and he plays hard. He lives by only one rule—never let a woman get close.

Olivia Lucas needs a job, and if that means working at a club that specializes in making members’ wildest fantasies come true, then that’s what she’ll do. A girl’s got to pay the rent, right? She never expected to fall for the gorgeous owner of Club X, though, but a man like him would never go for someone like her. Or would he?

Be sure to check it out…

Are We Playing God?

With the emergence of such diseases as the Middle East Respiratory Syndrome (MERS), the threat of a deadly virus spreading throughout the world has made some recent headlines in the news. What is scary about the MERS virus is that medical science can neither treat those afflicted with this illness nor prevent its spread. In addition, with the globalization of the world, a virus such as this this one has ample opportunities to circumvent the globe in a matter of days.

Plus, with a mortality rate of 30% and its increasing incidence, national agencies such as the NIH and CDC have taken note to its potential threat. Fortunately, the MERS virus does not seem easily transmittable from one person to another. However, the mere nature of the virus make it unstable and prone to rapid mutations.

What if one of these chance mutations made the virus spread easier? What if another mutation increased its mortality rate? What if the virus began to spread like a California wildfire throughout the world?

This scenario is the foundation for The New Reality. Though fictional, the book has its roots based upon medical fact. While in training, I saw how researchers were using a virus that caused the simple cold and injected an “inactive” form of it into children during clinical trials involving gene therapy. Though this virus was supposed to be “safe”, it unfortunately lead directly to the deaths of some young patients and caused others to acquire a leukemia-like blood disease.

The question I posed to some of these researchers at the time was what if this theoretically “safe” virus somehow got released upon the environment? Because the virus caused the common cold, could it hypothetically spread unabated across the globe, and modern medicine could do nothing about it? I’ve been harboring these concerns for well over ten years before I even began writing The New Reality.

What I’ve learned in my medical career has not been how much modern medicine knows, but how much modern medicine doesn’t know. Is playing God with gene therapy harmless? Do we know and understand enough to safely continue clinical trials? Is what we are doing to our crops by manipulating their genes any different? Are we causing harm to the environment or worse yet to ourselves by creating genetically modified foods?

I certainly am not a pessimistic person or dwell on these issues. However, I wrote The New Reality to vent some of my fears. Though the book has this serious underdone, the novel is tempered with humor, history and mystery. I hope that everyone who reads it not only enjoys the story but also goes away thinking of about some of the pertienent issues written within it.

About the Author
Stephen Martino holds an M.D. from the University of Pennsylvania and is a neurologist in New Jersey. When he is not working, he can be found with his five children doing homework or cheering them on at a soccer field, basketball court, or dance recital. Martino is a member of the Knights of Columbus, a Cub Scout den leader and is an active public speaker, helping to educate the local community and healthcare professionals on the signs, symptoms and treatment of stroke. THE NEW REALITY is his first novel.

Alex Pella, an acclaimed neuroscientist and the hero of the new medical thriller, THE NEW REALITY, finds himself racing across the globe to find a cure for a rapidly spreading illness threatening to end all of humanity. To combat this worldwide pandemic, Pella and his colleagues must use modern science in an attempt to decipher a code hidden by God within the original pages of the Bible.

THE NEW REALITY is the first book in a projected trilogy starring Alex Pella, created by New Jersey-based neurologist Stephen Martino. With his mixture of medicine, politics, biblical riddles, and futuristic science, Martino joins such masters of the medical thriller genre as Dan Brown, Michael Crichton, and Robin Cook.

Martino’s villain is a deadly retrovirus accidentally unleashed on the world in the year 2080, a time when no country is financially equipped to deal with such a disaster. It’s up to Pella and NIH expert Marissa Ambrosia to lead the search for a cure while fending off an elite foreign military unit sent to stop them. The scientists, guided by an ancient code concealed within the Hebrew text of the Old Testament, traverse ancient lands in an attempt to solve a biblical riddle and save humanity from total extinction.

Martino says he wrote THE NEW REALITY “more than just to entertain the reader. I really wanted to create a novel with substance, like (Brown’s) THE DA VINCI CODE or (Crichton’s) JURASSIC PARK. These books not only tell a fantastic story, but they also make the reader think.”

In THE NEW REALITY, Martino has included such hot-button contemporary topics as genetic manipulation, gene therapy, unprecedented economic debt, and the rise of big government, combining them with more esoteric subjects such as the Bible Code and the mysteries hidden in the Book of Revelation.

The Bible Code, Martino explains, does exist and was discovered by Dr. Eli Rips, a mathematician in quantum physics. The code has been confirmed by mathematicians at Yale, Harvard, and Hebrew University, as well as by peer-reviewed mathematical journals and the Pentagon. The code, Martino continues, is found in the original Hebrew version of the first five books of the Old Testament, called the Torah, and only in its untranslated, Hebrew form.

All of these elements, Martino maintains, separate his book from the pack. He calls THE NEW REALITY “issue-oriented fiction. There are real concerns facing society today that threaten both the sovereignty and prosperity of our future generations. Though fictional, my novel addresses some of these issues and predicts the potential consequences we face as a nation if they are not properly addressed today.”

Check out My Thoughts, on this title on our sister site: