IT IS OUR PLEASURE TO WELCOME PHILLIPA AS A FEATURE GUEST TO MY BOOK ADDICTION AND MORE TODAY….

I first started writing when I was four, when I sent in a joke to The Beano. After leaving school, I went on to read English Language & Literature at Oxford. Since then, I’ve worked in  advertising, journalism and PR.

I didn’t start writing fiction until 2005, after joining an Internet creative writing site. My first novel,  Decent Exposure,  a sexy romantic comedy set in the Lake District, was published in October 2006. It topped the Play.com Romance chart, won the RNA New Writers Award and was made into a TV movie called Twelve Men of Christmas which aired on the Lifetime channel in December 2009. It is now making its way to the rest of the world and/or on DVD.

And wow! How time flies when you’re having fun. I’ve now had five books published. My Little Black Dress books, thanks to my lovely readers, they’ve all reached Number One on the Amazon LBD chart. It Should Have Been Me also hit number four in the Malaysia Star fiction charts.

My books have been or are being translated into all kinds of languages including Thai, Turkish, Bulgarian and Russian. They are all being published in the USA by Sourcebooks and some are available in large print too. I was recently a judge for the RNA Love Story of the Year 2011.

My current and new releases are:

I live in a Staffordshire village with my husband and daughter but I try to spend part of the year in the Lake District – walking, visiting literary locations and trying to track down the ultimate Lakeland pub and tea shop. I also love body boarding and have recently had my first surfing lesson.

Carrie Goes Off the Map 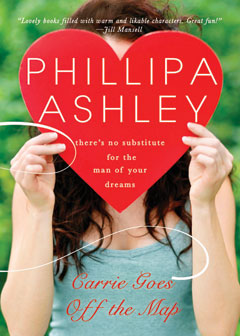 Carrie Brownhill, recently dumped by her fiancé, is determined to get away from men forever. Yet she finds herself stuck in a VW camper van careening through the English countryside with the intriguing Matt Landor, MD, and he seems to be just what the doctor ordered for a broken heart…

Where to buy my book…

One Reply to “A FEATURE WITH PHILLIPA ASHLEY, AUTHOR OF “CARRIE GOES OFF THE MAP”…”