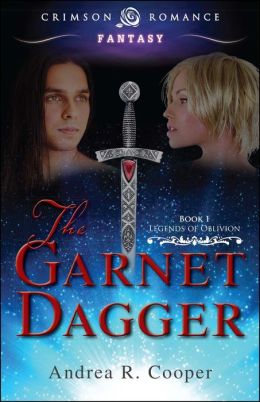 The Garnet Dagger is a fantasy / paranormal with a light romance thread. It is the first book in a trilogy.

Blurb: Everyone knows what happens when a vampire bites a human…but what if the victim is Elvin?
Forbidden to cross the Elvin barrier into human lands, Brock cannot sate his curiosity. Cursed by a vampyre bite that forces him to feed on the life-essence of others, he is unable to touch another without taking their life. Chained by prophesy, he must find a witch, pierce her heart, and draw her blood for his cure.Celeste must escape the monks who have held her prisoner for years. Her magic has been kept dormant by her captors. An ancient powerful Warloc craves her powers. If he succeeds in devouring her magic, she and his world will die.When Brock falls in love with Celeste before realizing her demise is his cure, will love triumph over his desire to be healed? Will he risk everything to save her from a Warloc, an oath breaker, who also wants her dead?
http://www.goodreads.com/book/show/17364172-the-garnet-dagger
Available at: Crimson Romance ebooks | Amazon | B&N | iTunes
Book trailer: http://youtu.be/ISi0u9LoseM
————— 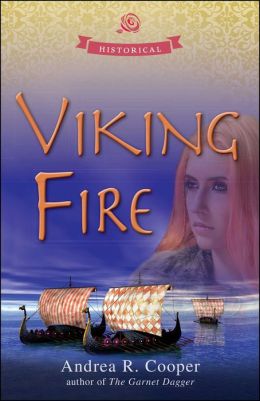 Viking Fire is a historical romance with a touch of magic.

Blurb: In 856 CE, Ireland is a land of myth, magic, and blood. Viking raiders have fought the Irish for over half a century. Rival Irish clans promise only betrayal and carnage.

Kaireen, daughter of Laird Liannon, is suddenly forced into an arranged marriage with her sworn enemy, a Viking. She refuses to submit. With no mention of love, only land and the protection of her clan, she endeavors to get her betrothed banished from her country. Will love find its way around her stubborn heart?Bram, the Viking, finds himself without future or inheritance as a younger son in his family. A marriage to the Laird’s daughter would grant him land if he swears fidelity and if his men will fight along with the Liannons against any foe – Irish or Viking. However, the Laird’s feisty daughter only holds animosity for him and his kind. Is marriage worth the battle scars of such a relentless opponent?With the blame for a rival laird’s death treacherously set against the Liannons, Kaireen and Bram must find a way to lay aside their differences as an unforeseen darkness sends death snapping at their heels.
http://www.goodreads.com/book/show/18104475-viking-fire
Book trailer: http://youtu.be/m1bPZ3nUyzs

—————
About the author….
Growing up in Houston, Texas, Andrea has always enjoyed creating characters and stories. But it wasn’t until she was in her late twenties that she started writing novels.What happened that ignited the writing flame in her fingers? Divorced, and disillusioned by love songs and stories. They exaggerate. She thought. Love and Romance are not like that in the real world. Then she met her husband and realized, yes love and romance are exactly like the songs and stories say. She is now a happy wife, and a mom to three kids (two boys and a girl).Once she heard about a writer who never let her characters deviate from the script. If they did, she just killed them. How sad, she thought. For her one of the best parts of being a writer is letting the characters have a mind of their own and seeing where the story takes them.She loves this quote from Robert Frost, which sums up her opinion on allowing the characters their freedom: “No tears in the writer, no tears in the reader. No surprise in the writer, no surprise in the reader.”
― Robert Frost

Andrea writes fantasy, paranormal and historical romance. When not writing or reading, one may find Andrea dancing in Zumba.

She is excited to work with Crimson Romance on her forthcoming debut paranormal romance, The Garnet Dagger. She hopes you will enjoy the story as much as she did writing it. Viking Fire, her historical romance, is forthcoming late July 2013.

—————-
Check out My Thoughts:  on VIKING FIRE:
http://mybookaddictionreviews.com/2013/12/31/review-viking-fire-by-andrea-cooper/
—————–
Thanks everyone for stopping by today! Please visit the author on her social media network!