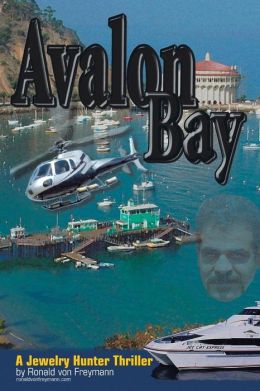 What inspired you to put pen to paper and write, Avalon Bay?
I never had a dream, much less a goal, to be a writer or to write a novel. The idea to write and to write a novel about Avalon came to me while sitting in our condo on Catalina looking out at the nighttime pacific ocean while winding down the Avalon portion of my financial practice five years ago and looking forward to retirement. I thought to myself…retirement? Retirement isn’t me, what will I do. It came to me almost instantaneously–write…write a novel. I stopped the work I was doing for a client and wrote the first two chapters of Avalon Bay. These became later chapters in the rewrite.
What was your process in writing this title, what came first the title, characters or storyline?
Storyline, characters, title. This was a natural setting for me, Avalon on Catalina Island, as we have a residence there and have thirty years experience with the island, it’s residents, and the unique community. I wrote and rewrote the novel over three years (actually five years as I was still winding down my financial services practice during the first two). It was my first book and was a learning experience, both with writing and navigating the administration and publishing world. My background is military (I graduated from West Point) and financial services. While I could draw on these experiences, writing was new to me. (An aside on this…I’ve often thought about my experience at West Point where the English Department tried their best to “find me,” [the term used at West Point to indicate you’ve been kicked out]. At West Point in those days, if you failed one course there was no recourse, you were history.
What do you feel the appear will be to readers for jewelry thriller, and a homegrown terrorist?
“The realization that homegrown terrorists are a real threat has been high, but is less now since there haven’t been many serious homegrown terrorist acts in the US in a while…and terrorism as a whole has been on the down side in the US. However, it still exists and, I believe, readers will be interested to read about it.”
What is next for you?
My next book, Gold-in-Quartz, a Jewelry Hunter Thriller, will be published 1st quarter ’14 and my third book, Larimar, a Jewelry Hunter Thriller, is targeted for mid 2015. Gold-in-Quartz is set in the California Gold Country and Larimar is set in the Dominican Republic (the first draft is 3/4 done). Consistent with my philosophy that you cannot write about what you haven’t seen, we just returned from a trip to the Dominican Republic where, among other things, we visited and had a personal tour of the only Larimar mine in existence in the world. (Larimar mines are basically 4X4 foot vertical holes in the ground that go two or three hundred feet deep to intercept volcano tubes into an extinct cone volcano).
Do you have any regrets for the year 2013 and what do you wish to accomplish for this year, 2014?
None…my philosophy is you can’t dwell on the past…but you can learn from it. I fully (as best I’m capable of) understand the non-writing issues associated with writing and, hopefully, they won’t be a drag on my writing going forward. And I have learned a huge amount about writing, which will cut down the time to complete a book. I have worked out a process in my mind how to go about researching, writing, self editing, and using an independent editor before dealing with publishing. It seems to have worked for my second book…I don’t sit back and ask myself what do I need to do next.

Thank you for stopping by today!!

Good luck with this and your future endeavors!!

Ronald von Freymann is a graduate of the United States Military Academy at West Point and the United States Army Ranger School and served as the administrator of the U.S. Army and Behavioral Sciences Research Laboratory. A combat command veteran, he has unique insight into the difficulty to detect and neutralize terrorist cells before they act. He resides with his wife, Janet, among residences in Avalon, Catalina, California’s Central Coast, and Huntington Beach, Calif.

Available at www.amazon.com and www.barnesandnoble.com.

Avalon Bay: A Jewelry Hunter Thriller is a mystery thriller set in the legendary town of Avalon on the idyllic island of Catalina.

Jenn, a retail jewelry marketer known as the Jewelry Hunter, inadvertently learns that a fundamental Islamic terrorist sleeper cell comprised, in part of American Caucasian women converts to Islam, plans to destroy two tourist ferries that service Catalina. Unable to convince local authorities, the FBI, or Homeland Security of the threat, she, her friend Tiffany, and her husband, Bill, resolve to thwart the terrorists on their own. Jenn confronts and captures the cell’s Saudi born cell leader when he attempts to initiate the plot from a commuter helicopter flying over the two ferries. This leaves the suicide bombers on each ferry to act on their own. Jenn must determine a way to prevent them from completing the plot before the ferries enter the Long Beach and Avalon harbours without alerting the terrorist that the plot has been discovered and their leader captured.

Avalon Bay, a Jewelry Hunter Thriller  is available through the following fine bookstores in hard cover and softcover format as well as the Kindle format through Amazon.com

(Sponsored by the publicist/and/or author)

We are offering 1 lucky commenter a copy of “Avalon Bay”. All you have to do is make a comment. Giveaway will run from February 11 until February 14, 2014.

THANK EVERYONE AND GOOD LUCK!!

“My Thoughts” on “Avalon Bay” over at our sister site, MyBookAddictionReviews

If you get the chance, please help spread the word and of course connect with your favorite author!!