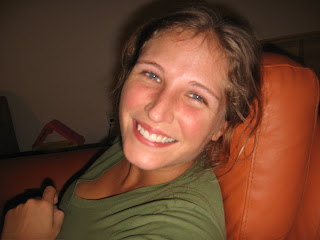 “This is my office. My photographer is a three year old.”

A mother of four-year-old twin girls, I find time to write during preschool and after bed time. During daylight hours, we’re all usually outside, and no writing is to be done.

I’m currently attempting to earn my master’s degree in mass communications at UF. I’m an editor and journalist as well. I used to produce television news, and I thought no job could be more fun than that. Until I found this one.

You can find out more than you ever wanted to know about my family life over at my parenting blog, Tales of an Unlikely Mother.

Here’s the blurb for Just the Messenger
It’s a high-heat action romance of 34,000 words.
When Graciela Merced fumbles a package she’s delivering for her mysterious and sexy boss, Gene Hardy, she finds out he’s more than just a wealthy photographer. Prepared to lose her job, she confronts him…and ends up embroiled in the tricky takedown of a powerful drug cartel pushing cocaine into the heart of New York City.
Marco Valencia is an undercover agent, working against time—and against Gene Hardy—to crack Angel’s Drug Cartel before the story makes it to the press. When Hardy’s luscious Venezuelan messenger literally falls at his feet, he has no idea just how well he’ll get to know the beauty or how difficult it will be to drop her.
Hardened by experience, Gene Hardy takes his undercover work seriously, and charges a hefty price. When Grace makes a careless mistake and hurls him back into the visage of Marco Valencia, he must either fire her, or involve her in a twisted plot that could kill them all.
As the two men battle over their feelings for Graciela—and their attraction to each other—one thing becomes perfectly clear.
Grace is much more than just the messenger.
BUY LINKS:
It’s up on Amazon: http://www.amazon.com/dp/B00BOYYKXO
All Romance Ebooks https://www.allromanceebooks.com/product-justthemessenger-1098125-152.html
and at Barnes and Noble: http://www.barnesandnoble.com/w/just-the-messenger-ninette-swann/1114763651?ean=2940016263878
Also available directly from publisher: http://noboundariespressstore.com/index.php?main_page=product_info&products_id=262
You can find it on Goodreads here: http://www.goodreads.com/book/show/17558801-just-the-messenger
###
*At the end of the tour, the author will be giving away three copies and a $25 Amazon giftcard*
###
Thanks everyone and please spread the word!

2 Replies to “~BOOK SPOTLIGHT~ JUST THE MESSENGER BY NINETTE SWANN…”