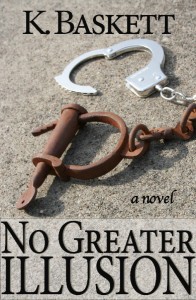 ABOUT NO GREATER ILLUSION

A number of unacquainted adults, from various walks of life, routinely enjoy the benefits of residing in a nation where liberty and justice are among its chief luxuries. Having different statuses of education, income, and ethnicity, all are suddenly forced to cope firsthand with the “domino effect” of America’s violent reaction to the assassination of a promising female presidential nominee, Gov. Ceinwen Jarvis. In a day and time where the advancement of technology allows one’s voting status, banking information, and even medical history to be accessed by microchip scan, they quickly realize that America – as well as their own lives – will never be the same.

Jack of all trades, master of none – save for the art of procrastination – K. Baskett lives by the motto, “Never do today what can be put off until tomorrow.” K. firmly believes that you aren’t really interested in the author’s hometown, spouse, children or pets, and has therefore decided to spare you the details.

No Greater Illusion is the author’s debut novel.

Each person will enter this giveaway by liking, following, subscribing and tweeting about this giveaway through the Rafflecopter form placed on blogs throughout the tour. This promotion will run from April 1 – 26. The winner will be chosen randomly by Rafflecopter and announced on April 27.

Thanks everyone and enjoy!