~TO CATCH A PRINCESS~

The Royals live among us…and we’re without a clue!
Join the hunt for intrigue, jewels and royalty–you never know what you’ll find, but I guarantee hearts on the line in To Catch a Princess by New York Times and USA Today Bestselling Author, Caridad Pineiro.
###

A bit about To Catch a Princess:
Untold wealth, a loving family, a solid career in America: the only thing Princess Tatiana lacks is the one thing she really doesn’t want—a husband. Unfortunately, her parents have just arranged her marriage to a royal from the old country. Are they kidding? It’s the twenty-first century!
Police Detective Peter Roman is a royal living incognito … and escaping a secret that has haunted his family for years. He’s been quietly in love with his best friend Prince Alexander’s sister for as long as he can remember. Little does she know that he is secretly the Grand Duke to whom she is unwillingly betrothed…
When a series of high-end jewelry heists threatens Tatiana’s exclusive charity exhibition in glamorous Monaco, the two must trap the clever jewel thief before he strikes again. In a fight for their lives, Peter’s secret identity is revealed. With danger and passion increasing to the breaking point, she must decide: catch a thief…or trust the heart of her true love.
Publisher: Entangled Publishing – Suspense Imprint
Publication Date: August 12, 2013
Amazon | Barnes & Noble
###

A bit about Caridad:
New York Times and USA Today bestselling paranormal and romantic suspense author Caridad Pineiro wrote her first novel in the fifth grade when her teacher assigned a project – to write a book for a class lending library.  Bitten by the writing bug, Caridad continued with her passion for the written word and in 1999, Caridad’s first novel was released.  Over a decade later, Caridad is the author of more than thirty published novels and novellas.  When not writing, Caridad is an attorney, wife and mother to an aspiring writer and fashionista.
Links:
Website
Facebook
Twitter
Goodreads 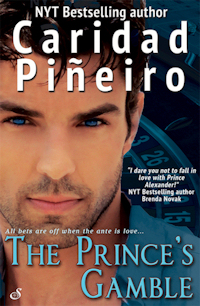 Thanks to Kym, at Entangled Publishers we are offering 1 lucky commenter a digital copy of “THE PRINCE’S GAMBLE” by Caridad Pineiro. Giveaway will run from August 14 until August 21,2013.

“My Thoughts” on “To Catch a Princess” by Caridad Pineiro is coming soon on our sister site, www.mybookaddictionreviews.com

Enjoy and please spread the word!

12 Replies to “CARIDAD PINEIRO~ GIVEAWAY AND SPOTLIGHT: TO CATCH A PRINCESS”