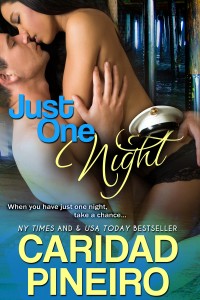 It’s been awesome to recharge and it’s given me new energy for my latest Work-In-Progress – One Special Night – which will be out in mid-July.

One Special Night is the next novella in the Take a Chance series. The first book, Just One Night, was part of the One Night Only anthology, but is now available individually. Just One Night is specially priced at .99 for a limited time.

Here’s a little more about Just One Night which you helped make a Top 75 Military Romance!
He has just one night to prove to her that anything is possible . . .

Jason Hart, Jase to his friends, has just graduated college and earned his commission as a Second Lieutenant in the Marine Corps. It’s the night of the graduation party and she’ll be there. His best friend’s slightly older sister, Nickie. Nickie is the only woman he’s really wanted for a long time. He has just one night to make it happen.

She has just one night before the man of her dreams leaves, maybe forever, but can she find the courage to take a chance . . .

Nicole de Salvo has been in love – and lust – for her little brother’s best friend for years. For years she’s watched from afar and done nothing about her attraction for Jason Hart only now their time together is almost at an end. On their last night together will she find the courage to do something about her feelings, or will she live with regret for the rest of her life?

You can find out more about Just One Night at these links:

In One Special Night, you’ll get to see more of Nickie and Jase, although that story will be about Tommy de Salvo, Nickie’s brother and Jase’s best friend. Tommy will find himself challenged by Navy Corpsman Jasmin Reyes, a woman who seems determined to go it alone. The sparks will fly as these two are thrown together during One Special Night.