ONE FOR THE WICKED 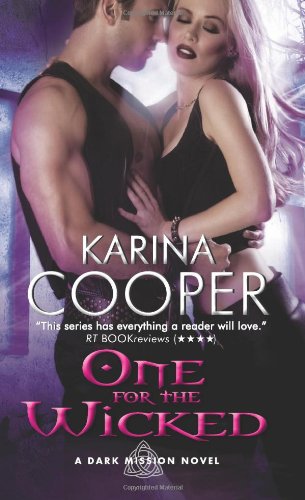 MBA&M: Please tell our readers a little about yourself?

Hi, there! My name is Karina, I’m an avid lover of all things creative and exciting. I write romance, urban fantasy, and pretty much anything else people will let me get away with. I’m so happy to be here!

MBA&M: Why do you enjoy writing Paranormal Romance?

I believe in spirits and witches and things that go bump in the night. I love the concept of forbidden love, especially when it crosses “species” lines—like vampires and humans, or witches and witch hunters. Paranormal romance allows me to write about the magic and mayhem I believe is out there.

MBA&M: Where did the idea of “A Dark Mission” series come from?

I was watching Discovery one day, and they were doing a special on supervolcanoes. That got me thinking that I live on a subduction zone, which is the kind of tectonic plate edge responsible for the world’s worst earthquakes. What would happen if the pacific northwest collapsed? How would humanity cope? Obviously, my optimism doesn’t run very high…

MBA&M: I understand that “One For The Wicked” is the final book  in “A Dark Mission” series,do you feel that readers should read the first one or is it considered a standalone?

I think the series shines best when read in order. All of the elements that lead to One for the Wicked’s climax are laid out in the previous books, and the characters we see have their own stories that outline why they do what they do. You can read it alone, but I wouldn’t recommend it.

MBA&M: What three words would you say describe your writing style? And what authors do you feel influenced your writing career?

Neil Gaiman and Terry Pratchett are the two I most often “blame” for setting me on this path. Not because their fiction influenced me, but because they themselves influenced me. Cherry Adair taught me how to plot, and it’s thanks to her that I can be so prolific! When it comes to words to describe my writing style, I’d say, “Dark, intense, gritty”.

MBA&M: What was the hardest scene to write, and how hard is it to keep the sensual action going throughout the book and not lose the context of the story?

The hardest scene for me to write in One for the Wicked was a point where Shawn reveals himself as a total bad guy. It’s from Kayleigh’s POV, but I knew if I went too far, readers would never see him for the torn man he really was. I worked hard to levy the right amount of fear, anger and total jackwagon behavior without crossing the line. Some might say he crossed it long before, though.

MBA&M: Now, inquiring minds what to know, or rather me, do you get lost in a book in the story,  rather reading one or writing a story?

I do actually get lost! The beauty of how I write is that I’ve got it all plotted before-hand, which means I can just put words to page and let it flow. I don’t ever have to stop and think, “What would she do?” I know, and it’s like reading a book as the words are laid down. I can’t really read without getting sucked in to the story. I’d be a terrible editor!

MBA&M: Which character in “One For The Wicked” jumps out at your and why?

I really, really love Kayleigh. I have a weakness for alpha males, I won’t lie, but something about Kayleigh really resonates with me. She’s a smart woman with very base instincts—she loves the rough and ready men, gets her motor cranked by rough hands and dangerous smiles—but she’s trapped in this world where her father is the only family she has left and everything is falling apart around her. I think that, like Juliet, she has an inner sort of strength that doesn’t reveal itself physically, but in how she bears what happens to her.

MBA&M: What is your next project, if you can share a few tidbits, we will gladly keep your secret? <image001.gif>

I’ll just bet you will! 😉 My next project is a novella coming out in the St. Croix Chronicles—my award-winning steampunk urban fantasy. The Mysterious Case of Mr. Strangeway is a project near and dear to my heart, because half of my proceeds will be given to Make a Wish. You can read more about it at this link: http://karinacooper.com/cherry-news-a-novella-with-heart/

Thank you so much for letting me come play! I hope your readers love the series as much as I loved writing it.

You can find me at my website here: http://www.karinacooper.com

From there, I have links to all my social media, so you can pick your poison! (Hint, I love Twitter best.)

What a pleasure to have you with us and our readers. We sure hope you will visit with us again soon!

One for the Wicked

Dr. Kayleigh Lauderdale possesses the only cure for what’s killing New Seattle’s witches. Desperate to acquire it, the resistance sends their best agent, but Shawn Lowe has his own agenda and it doesn’t include saving anyone–least of all, the daughter of his sworn enemy. He has to ignore the blistering attraction he feels the instant they meet, can’t give in until he gets what he wants. He just never counted on wanting her…

Kayleigh can’t believe how out of control Shawn makes her feel. He lies to her with one breath and excites her beyond reason the next. A reckless encounter could steal her heart, but the devastating plans of an old enemy may prove too much for either Kayleigh or Shawn to handle. When the world turns upside down, it will take everything they have to hold on… to life, to hope, to each other.

Born from the genetic mash-up of lesser royalty, storytellers, wanderers and dreamers, KARINA COOPER was destined to be a creative genius. As a child, she moved all over the country like some kind of waifish blonde gypsy and thrived in the new cultures her family settled in. When she (finally) grew up, she skipped the whole genius part and fell in love with writing because, really, who doesn’t love making things up for a living?

One part romance fanatic, one part total dork, and all imagination, she writes dark and sexy paranormal romance and urban fantasy. When she isn’t writing, Karina is an airship captain’s wife and Steampunk fashionista. She lives in the beautiful and rainy Pacific Northwest with a husband, four cats, two rabbits, the fantasy of a dog, and a passel of adopted gamer geeks. www.karinacooper.com

ONE FOR THE WICKED by Karina Cooper is an interesting Paranormal Romance/Science Fiction/Fantasy. #5 in the “Dark Mission” series and the finale.While, “One For the Wicked” may be read as a stand alone, I feel you need to read all four to better understand the characters, and the plot. See “Blood of the Wicked”,”Lure of the Wicked”,”No Rest for the Witches(A Novella)”,”Sacrifice the Wicked”,and “Wicked Lies”. Follow,Dr. Kayleigh Lauderdale and Shawn Lowe on a journey of love with a bit of betrayal along the way. Filled with witches,enemies,the resistance,revenge,passion,desire,prejudice,secrets,betrayal and of course love. What happens when a witch meets a sexy bodyguard,”One For the Wicked”,of course. A wonderful and powerful conclusion to the “Dark Mission” series,and one if you have followed along you will hate to see gone. Ms. Cooper is a wonderful storyteller,who using engaging characters and a great storyline. With a few twist and turns added in for extra measure. If you enjoy paranormal,romance, science fiction,fantasy and love than you will not regret picking up “One For The Wicked”. Received for an honest review from the publisher.

REVIEWED BY: AprilR, (Review courtesy of My Book Addiction and More)

Thank you for spending time with us and our guest!

Please spread the word about this amazing author and her stories~