1. Could read every single day.

2. Could read every single day.

Wouldn’t it be awesome!! 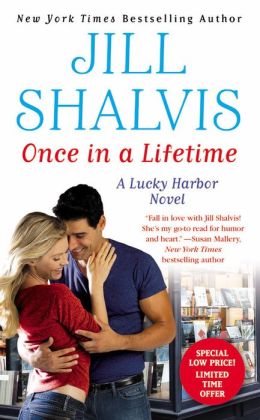 ONCE IN A LIFETIME by Jill Shalvis (February 18, 2014; Grand Central Publishing Mass Market; $6.00)
SOMETIMES WRONG IS OH-SO-RIGHT After a wrenching loss, Ben McDaniel tried to escape his grief by working in dangerous, war-torn places like Africa and the Middle East. Now he’s back in his hometown and face-to-face with Aubrey Wellington, the hot-as-hell woman who is trouble with a capital T. Family and friends insist she’s not the one to ease his pain, but Aubrey sparks an intense desire that gives Ben hope for the future.
Determined to right the wrongs of her past, Aubrey is working hard to make amends. But by far, the toughest challenge to her plan is sexy, brooding Ben – even though he has absolutely no idea what she’s done . . . Can this unlikely couple defy the odds and win over the little town of Lucky Harbor?
~EXCERPT~

A few snowflakes floated lazily out of the low, dense clouds.  One block over, the Pacific Ocean carved into the harbor, which was lined by three-story high, rugged bluffs teeming with the untouched forestland that was the Olympic Mountains.  Around him, the oak-lined streets were strung with white lights, shining brightly through the morning gloom.  Peaceful.  Still.

He went to places after disaster hit, whether man or nature made, and he saw people at their very worst moments.  Sometimes he changed lives, sometimes he improved them, but at some point over the past five years, he’d become numb to it.  So much so that when he’d gone to check out a new jobsite at the wrong place, only to have the right place blown to bits by a suicide bomber just before he got there, he’d finally realized something.

He didn’t always have to be the guy on the front line.  He could design and plan water systems for devastated countries from anywhere.  Hell, he could become a consultant instead.  Five years of wading knee deep in crap, both figuratively and literally, was enough for anyone.  He didn’t want to be in the right hellhole next time.

So he’d come home, with no idea what was next.

About the author
New York Times bestselling author Jill Shalvis lives in a small town in the Sierras full of quirky characters. Any resemblance to the quirky characters in her books is, um, mostly coincidental. Look for Jill’s bestselling, award-winning books wherever romances are sold and visit her website for a complete book list and daily blog detailing her city-girl-living-in-the-mountains adventures.
Social Media Links:
Website
Facebook
Twitter
Goodreads
————————————-
~RAFFLECOPTER GIVEAWAY~
(Sponsored by the publisher and/or author)

“My Thoughts” on “Once in a Lifetime” coming soon on our sister site, MyBookAddictionReviews

Now for a little fun, inquiring minds want to know…..

What would you do if you owned a bookstore? Leave a comment.

Thanks everyone and have a great day!

4 Replies to “ONCE IN A LIFETIME~ JILL SHALVIS~EXCERPT AND RAFFLECOPTER GIVEAWAY!”