IT IS OUR HONOR TO HAVE WITH US TODAY….

~RUMORS THAT RUINED A LADY~ 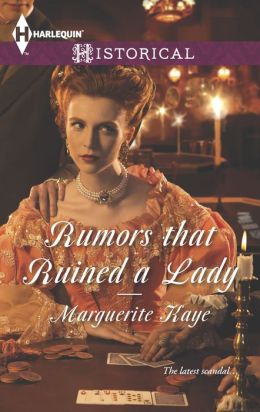 So without further ado, let’s give Marguerite, a big MBA&M welcome….

MBA&M: Good morning, Marguerite! Please tell our readers who may not know you a little about yourself?

MK: Hi there, and thank you very much for having me. So, obviously I’m a writer. I write historical romances, mostly what I call Regency ‘with a twist’ – so I’ve done Regency sheikhs, I’ve had a housebreaker hero, a freed African slave hero, and my heroines tend to be very independent women who definitely do not need a man to save them. I’ve written quite a few shorts as well as full-lengths, and these tend to be more experimental, from Highland shape-shifters, to Selkies, time-travellers and vampires.

I live on the very wet and very beautiful west coast of Scotland, where the hill-walking is wonderful, my garden would be wonderful if it wasn’t for the rain, and I’d like to think my cooking is wonderful no matter what the weather does. I take a lot of inspiration from my surroundings, so if you look at a local map, you’ll find the names of a great deal of my characters are villages, lochs and mountains, and most of my Highland stories are set in real places close to my native Argyll.

MBA&M: What was your inspiration behind writing ” Rumors That Ruined a Lady?

MK: Caro is one of five sisters, and she’s the dutiful one of the family. She’s mentioned fleetingly in the previous book, the Beauty Within, though you definitely don’t have to have read that one first, all of the books in the series are designed to be read stand-alone. In The Beauty Within, I mention that she’s married, and hint at dark doings, at her having disappeared from view, and cut herself off from her sisters.

So that was my starting point. But that wasn’t all. I originally studied Scots Law at university, and though I took my degree I never practiced. It struck me then, way back, how very unfair the law was historically, to women, and how often they were treated not as people but as property. Most women in an unhappy marriage would have had no option but to put up and shut up, but I wanted to write a story where my heroine fought back against the law. What I didn’t realise until I was very far into it though, was how incredibly difficult it was going to be to get her a happy ending without ignoring the very laws I wanted to highlight.

MBA&M: What scene in “Rumors That Ruined a Lady” stand out the most to you and why?

MK: For me, it’s the opening scene when my hero, Sebastian, finds Caro unconscious in an opium den. I wanted to start at a pivotal point in Caro’s life, and I wanted to show that she really had reached rock bottom. I also wanted to contrast how she used to be, in the hero’s memory, with how she appears now, to show the dramatic change in her, and to get the reader wondering what on earth has happened since they last met. I also wanted to make the reader aware that there had been a lot of history between the two of them, that it had been highly-charged, and that it had ended very badly indeed.

I had to do quite a bit of research into this scene, never having smoked opium myself, needless to say Goodness knows what the footprint on my laptop looked like at the end of it, but I hope the net result is something atmospheric, a bit threatening, a bit claustrophobic, reasonably accurate and much more than a bit intriguing.

MB&AM: Who is your favorite secondary character in “Rumors That Ruined a Lady”?

MK: That’s a tough one, because there are few. I’m tempted to say Bella, the wicked stepmother, but I had even more fun with her in the last of the series, which I’ve just finished writing, so I’m going to plump for Sir Timothy Innellan (who is named for one of my local villages). I had such fun with Sir Timothy, who came into being as an extra in the denouement of the previous book, The Beauty Within. He’s colourful, he’s gullible, he’s pompous, but he’s also a bit hen-pecked, quite fair-minded, and in his own way, a wee tiny bit of a rebel. Poor man, he’s modelled on a Monty Python character, the Upper Class Twit of the Year. I doubt he’ll ever get his own happy ending, but I wish he could.

MBA&M: When you where creating your hero/heroine did you have specifics already laid out, or did not present themselves as you started writing their story?

MK: As I’ve already mentioned, part of Caro’s character was defined by her role as the dutiful one of the family. To someone with such an ingrained habit of doing what is expected of her, following her own wishes and desires doesn’t come naturally or easily, so I needed to put her in extremis before she could take action. The impact of rebelling against what you’ve spent a lifetime adhering to is huge, and it’s that journey that is the focus of Caro’s story.

In my head, Sebastian is a bit like Alex Karev from one of my favourite tv series, Grey’s Anatomy, but his actual character evolved only after I’d got a solid understanding of Caro’s. He needed to really ‘get’ her, and so I thought he probably also needed to be, in a different way, a victim of duty. But rather than be hidebound by expectations, Sebastian has spent his life defying them. He’s a rebel, he refuses to conform, and he’s determined to be just as bad as he can be. But then life intervenes, and suddenly he has no way back, and he’s stuck forever with the guilt of all his actions and no way to atone.

MBA&M: What’s your next project?

MK: I’ve just finished the last of my Armstrong sisters’ romances, with a hero who’s very close to home, a Glasgow shipbuilder, and a story that takes the series full-circle back to where it began, in 19th Century Arabia. Unwed and Unrepentant will be out in May next year

Then in June 2014 my trilogy of First World War stores, Never Forget Me, will be released. This was quite a departure for me, though it’s a period of history I’ve always found fascinating.

And I’m still writing in that era, currently working on two linked shorts set in the 1920s, a time of fast and fascinating social change, especially for women. My heroines, Daisy and Poppy are sisters and actors, one on the London stage, one in Hollywood, and in Daisy’s story, which I’m working on at the moment, I’m experimenting with the first person.

After that – another full-length that will be dark and scandalous, though beyond that, I have absolutely no idea!

MK: For me, comfort food has to be soup, which probably sounds a bit weird, but I guess it goes back to childhood, as all these things do. I love to cook, and I especially love to cook with vegetables I’ve grown myself. It doesn’t matter what kind of soup it is but I prefer traditional ones like Scotch broth, lentil (just like my mum makes), pea and ham, and cock-a-leekie.

I’m a big music fan. I love, love, love Elbow, Mumford and Sons, the Jayhawks, Civil Wars, to name a very few, and I think Alison Kraus is simply unsurpassable. I’m also a wee bit of a closet traditional country fan, so I’m thrilled to bits to be going to see Dolly Parton next year in Glasgow with my mum and my sisters.

Reading is a bit like music – a bit of everything and a lot. I review all the books I read, research and fiction, on my Goodreads page, save for historical romance, which I read less of because I get way too critical, and I never review because it’s way too close to home. I’m a sucker for the Kindle daily deal, which has introduced me to some great, some okay and some very bad, but I suppose my stand-by comfort reads are old-fashioned detectives. Right now I’m working my way through Elizabeth George’s Inspector Lynley series.

MBA&M: Please tell our readers where to connect to you and where they may purchase “Rumors That Ruined a Lady”?

MK:Rumors that Ruined a Lady is out now, in print and digital, UK, US, Canada and Australia. You can read an excerpt of this and all my other books and find the ‘buy the book’ links over on my website: http://www.margueritekaye.com.

I love to chat, whether it’s about books, food, boxed sets, or life in general. I’m pretty active on Facebook: http://www.facebook.com/margueritekayepage and  Twitter: @margueritekaye, so please do join me there.

Thank you so much for having me, I hope I haven’t talked to much! And if I’ve not talked enough, and you have any questions, please do ask away, I’ll try my best to answer.

Thank you, Marguerite, for spending time with us and our readers today! What a thrill the Armstrong Sisters have been.

Amongst the gossip-hungry ton, no name has become more synonymous with sin than that of Lady Caroline Rider, cast out by her husband and disowned by her family. Rumor has it that the infamous “Caro” is now seeking oblivion in the opium dens of London!

There’s only one man who can save her—notorious rake Sebastian Conway, Marquis of Ardhallow. Soon Caro is installed in his country home, warming his bed, but their passion may not be enough to protect them once news of their scandalous arrangement breaks out….

Marguerite Kaye writes hot historical romances from her home in cold and usually rainy Scotland. Featuring Regency Rakes, Highlanders and Sheikhs, she has published almost thirty books and novellas. When she’s not writing she enjoys walking, cycling (but only on the level), gardening (but only what she can eat) and cooking. She also likes to knit and occasionally drink martinis (though not at the same time).

We are offering 1 lucky commenter a chance to win a digital copy(gifted from Amazon) an  older “Armstrong Sisters” title. Here is the list of titles:

6 Replies to “Q&A AND GIVEAWAY WITH MARGUERITE KAYE, RUMORS THAT RUINED A LADY….”