Skip to content
BRAND NEW THRILLER
FROM BLAIR BABYLON!
The Angel of Death
(Police Snipers and Hostage Negotiators #1)
An Angel Day Novel
ON SALE NOW FOR JUST 99c!
To protect and to serve, or to save her own brother? 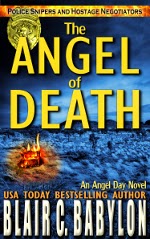 One Reply to “RELEASE BLITZ! THE ANGEL OF DEATH~ BLAIR BABYLON…”