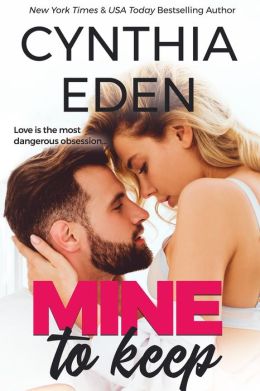 Love is the most dangerous obsession…

Skye Sullivan is trying to put the pieces of her life back together. She survived a brutal stalker and escaped his abduction, and now she is looking to the future—a future that includes Skye’s lover, billionaire Trace Weston. Skye thinks the danger is finally over for her.

When Trace’s past comes back to haunt him, Skye discovers that the man she loves isn’t quite who he seems to be. Trace has been leading a double-life. An ex-special forces agent, his military training turned him into the perfect killing machine. He made more than his share of enemies during his time in the military—and as he built his security empire—and one of those enemies is striking back.

He won’t lose her.

Skye is the one weapon that can be used against Trace—his only vulnerability. But he won’t let her go—he can’t. Trace will do anything necessary to protect Skye. Anything. Yet when she discovers the secrets that he’s tried to keep hidden, Skye’s pain and rage may send her running directly into the cross-hairs of a killer…

A BIT ABOUT THE AUTHOR…..

Award-winning author Cynthia Eden writes dark tales of paranormal romance and romantic suspense. She is a New York Times, USA Today, Digital Book World, and IndieReader best-seller.  Cynthia is also a two-time finalist for the RITA® award (she was a finalist both in the romantic suspense category and in the paranormal romance category). Since she began writing full-time in 2005, Cynthia has written over thirty novels and novellas.

Cynthia is a “hybrid” author. She has published extensively with New York (her New York publishers include Kensington, Grand Central, and Harlequin), and she has also enjoyed success in her indie writing career.

Cynthia lives along the Alabama Gulf Coast. She loves romance novels, horror movies, and chocolate.  Her favorite hobbies including hiking in the mountains (searching for waterfalls) and spelunking.  You can find Cynthia chatting daily on Twitter (www.twitter.com/cynthiaeden) or on her Facebook page (www.facebook.com/cynthiaedenfanpage).

Thanks for stopping by today. Spread the word!!