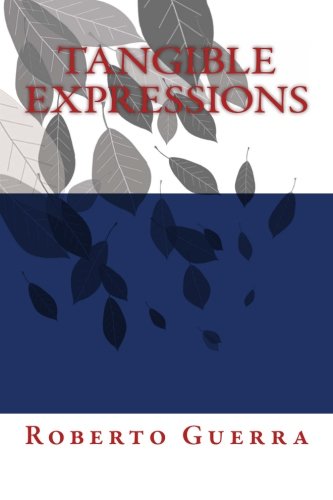 MBA&M: The inspiration behind “Tangible Expressions”?

RG: My inspiration for writing this book came from a variety of factors.
A few years ago a friend of mine instilled certain beliefs in me, such as the notion that the words we use can have greater effects on the world around us than most people believe.
Awakening a deep curiosity within me, I decided to do some research on the subject and learned about a Japanese man who had experimented with water and words, providing proof of this by demonstrating how certain words (particularly those with emotional contexts such as “love” and “hate”) can actually alter the molecular structure of water.
Utterly fascinated by these findings, I wondered what it would be like if there were actually certain human beings on this planet with keen enough senses to visually perceive words as they came out of people’s mouths, possibly as colorful waves, the color of the visual spectrum depending on the emotion put into the word.
If there are individuals who claim to read other people’s minds and others who purportedly possess psychic capabilities enabling them to see the dead roaming around, then why not someone with a new, more authentic form of clairvoyance?
MBA&M:What where the challenges in writing “Tangible Expressions”?
RG: The biggest challenge in writing Tangible Expressions was trying to create a compelling, unexpected ending that would make perfect sense, though not in the most conventional way. The result was a finale that would genuinely promote a peculiar form of deep reflection within the reader, forcing him or her to think about all the “what ifs” in their lives and the reasons why seemingly random events may have actually been the result of otherworldly phenomena.
MBA&M: What was or is the allure in writing a paranormal fiction, horror and science fiction all in one story?
RG:  I believe the fact that Tangible Expressions crosses different genres makes the narrative much more complete and intriguing. This is not a cliché story with predictable characters and a common plot. And yet, as crazy as it may sound, the story harbors a certain degree of realism that will make the reader wonder, “could someone really possess such an amazing ability?” while simultaneously taking the reader on an imaginary journey that will inspire a series of powerful emotions within.
MBA&M: A list of five things readers may not know about you?
RG:  A. I am perfectly bilingual and am able to read, write and speak in both English and Spanish at a native level.
B. I am a four veteran of the United States Air Force where I worked as a medical technician at Wright Patterson Air Force Base in Dayton, Ohio.
C. Even though I was born and raised in the United States, I completed my undergraduate studies and received my B.A in Communications and Journalism from one of the most prestigious universities in Latin America: Universidad de la Sabana, on the outskirts of Bogota, Colombia.
D. My favorite writers are Stephen King and (occasionally) Dean Koontz.
E. I am currently working on another novel, also in the paranormal genre, which I hope to have available to the public by early 2014.
Thank you Robert, for visiting with us and our readers today!

TANGIBLE EXPRESSIONS
ROBERT GUERRA
Publication Date: June 14, 2012
Willis Diamond lost his wife in a tragic accident only a few months ago. Stricken with grief, he decides to take a little vacation into the wilderness where he comes upon a cave entrance and is soon the victim of his very own curiosity. Within the depths of this dark world, he discovers an unearthly substance which alters his life, forever. From this day on, Willis is no longer the man he once was. Driven by an extra sense that no other human being has ever possessed, able to be taken by people’s words as well as their thoughts, he learns that there is much more to reality than what we see and hear on a daily basis; enchanting in some ways, horrific in others. Little would he have suspected the dangers of attempting to defy the laws of physics, using his newfound abilities in order to alter a dreadful past that has already been set in stone.
Link where my book can be purchased: http://www.amazon.com/Tangible-Expressions-Roberto-C-Guerra/dp/1477660399/ref=sr_1_1?s=books&ie=UTF8&qid=1366735148&sr=1-1&keywords=tangible+expressions
____________________________________________________________________________
ABOUT THE AUTHOR:
Roberto Guerra was born in Long Island, New York, USA. The son of Colombian immigrants, he was raised in Florida and joined to the United States Air Force at the age of 19. After honorably completing a four year term as a medical technician at Wright Patterson Air Force base, he moved to his ancestral homeland of Colombia where he acquired a Bachelor’s Degree in Communications and Journalism at University de la Sabana on the outskirts of Bogota, South America’s third largest city.Able to speak, read and write in both the English and Spanish languages at a native level, Guerra has written four novels, all in English, in the area of paranormal fiction, horror and science fiction.

We are offering 1 copy of either print or digital copy of TANGIBLE EXPRESSIONS to 1 lucky commenter. This will be “Gifted” through Amazon.

For “My Thoughts” on this title,visit: