~MURDER ON THE ORIENT EXPRESSO~ 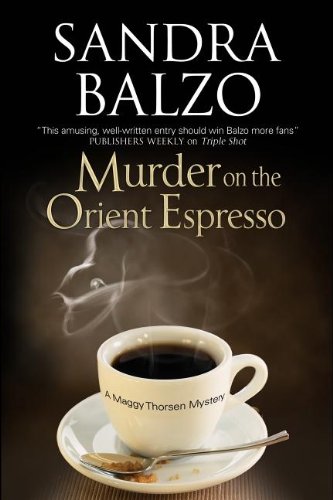 WELCOME, SANDRA! SO SET BACK AND ENJOY YOURSELF,EVERYONE!!

On the road with Murder on the Orient Espresso

The idea of taking somebody on vacation is usually greeted with cheers. Even jubilation. Not always so, though, when you’re a series author and that “somebody” is your protagonist.

It’s no coincidence that those of us who read series mystery enjoy the familiar settings and characters from book to book. That is, after all, the very definition of a series. I have to admit that, as a reader, I’m not all that enthusiastic about change.   For my money, you can keep your “fish out of water” plot, thank you very much. I prefer my finny friends comfortably submerged in a familiar pond.

That being the case, I’ve wondered why authors decided to send their sleuths on field trips.  Before I started writing my Maggy Thorsen Coffeehouse Mysteries, I assumed it was because the authors–not their readers–were bored and looking for a new challenge.

After seven books in the Maggy series, I’m not so sure about that. For my part, I’m quite happy keeping Maggy in the coffeehouse and the coffeehouse in Brookhills, Wisconsin. (Though I did knock it down once and move it across town.)

The problem I’ve found through the years, though, is a dearth of people to kill. Small town, small population. And getting smaller.

And so, in Murder on the Orient Espresso, I decided to have Maggy accompany her main squeeze, Sheriff Jake Pavlik, to South Florida to a mystery writers’ conference, where Pavlik is to speak.

This was not as much of a stretch for me as it was for Maggy. I now live in Fort Lauderdale and am treasurer of the Florida Chapter of Mystery Writers of America, which puts on the premier mystery writers conference in the world, Sleuthfest.

[Disclaimer: Any resemblance to real persons, living or dead, is unintentional and purely coincidental. Objects in mirror may be closer than they appear.]

For the record, Sleuthfest does NOT pile various warring factions of writers, reviewers and fans onto a night train into the Everglades to re-enact Agatha Christie’s Murder on the Orient Express. And if we did, we’d make damn sure the weather was good, the tracks were solid and . . . well, I can’t promise you an absence of pythons. They are becoming a bit of a nuisance down here.

But you get my point. The scenario would have been a little tougher to achieve in Brookhills. Besides, I’d been dying to give Maggy some alone-time with Sheriff Pavlik, he of the tousled dark hair and mood-ring blue eyes. Sending them away together was just the ticket–both for the relationship to develop, but also to give Pavlik a co-starring role.

I think it all works very nicely, and researching and writing Murder on the Orient Espresso was an absolute blast. I even put a diagram of the train and a cast of characters at the front of the book, like in an old-time mystery novel.  Publishers Weekly says Orient Espresso is “exciting,” and Booklist predicts this “cozy with a shot of Christie” will be a hit with my readers.

I sure hope so. And, in return, I swear I will send Maggy and Pavlik back to Brookhills posthaste for the ninth book. In the meantime, though, I hope you’ll come along with us for the ride.

I promise you it’s a wild one.

Thank you, Sandra for stopping by today!!

A bit about Sandra…..

Wisconsin coffeehouse owner Maggy Thorsen accompanies her main squeeze, Sheriff Jake Pavlik, to South Florida, where he’s been asked to speak at a mystery-writers’ conference.  Maggy is anticipating a romantic arrival in their hotel suite, but when the opening night event turns out to be a re-enactment of Agatha Christie’s classic, Murder on the Orient Express, the couple reluctantly sets off on a night train into the Everglades.

The idea is to solve the “crime” and return, but the troupe soon finds itself embroiled in a real-life murder mystery as creepy and baffling as any work of fiction.

Thanks everyone, please help us spread the word!!

3 Replies to “SANDRA BALZO~ TODAY’S GUEST….MURDER ON THE ORIENT EXPRESSO….”