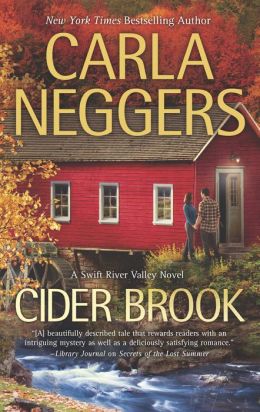 What made you decide to base Cider Brook in Massachusetts?

CARLA: If you look at a map of southern New England, you’ll see a large body of water smack in the middle of Massachusetts. That’s the Quabbin Reservoir. I grew up on its western edge. It was created about 75 years ago by demolishing, depopulating and flooding four small towns in the Swift River Valley to provide drinking water for metropolitan Boston. It’s a beautiful area of small towns and strong people, so it’s a natural for me to set Cider Brook and my Swift River Valley series there.

Is Knights Bridge based on a real place you’ve visited?

CARLA: Knights Bridge is my own creation but it’s certainly inspired by small towns where I’ve lived, especially by my hometown in the same area in west-central Massachusetts where Knights Bridge is located. Like Samantha Bennett in Cider Brook, I’ve had adventures following rock-strewn brooks…although none involved long-lost pirate treasure and a hunky firefighter!

What about a New England cider mill do you think creates the perfect backdrop for the book?

CARLA: Apples and apple cider say autumn and small-town New England to me. An abandoned 19th-century cider mill on a picturesque brook amid old stone walls sparked my imagination. What secrets might it hold? Who built it? Why on this spot? It’s now owned by rugged, taciturn Justin Sloan. Justin is a guy’s guy and a man who knows who he is, but he’s also a man with dreams—one reason he owns a cider mill that his friends and family think he should tear down. Then treasure-hunter Samantha Bennett arrives in Knights Bridge, and where does she end up? In Justin’s cider mill…right as a fierce storm hits and catches the place on fire. You could say those are the first sparks that fly between these two.

You’re known for creating very real and relatable characters. What’s your secret to getting your readers to feel like they know them?

CARLA: When my characters feel real and genuine to me—when they come to life on the page—I swear I would recognize them if they drove up to my Vermont hilltop and knocked on my front door. It’s a great feeling. It’s not so much about eye color and hair color but about who they are, how they act, what they would do and feel and notice in any given situation. That’s what makes them real for me, and, I hope, for readers.

Thank you, Carla for spending time with us and our readers today!!

Best wishes with you latest adventure in the Swift River Valley series!!

See below for Connect & Socialize links!

Being rescued by a good-looking, bad-boy firefighter isn’t how Samantha Bennett expected to start her stay in Knights Bridge, Massachusetts. Now she has everyone’s attention –especially that of Justin Sloan, her rescuer, who wants to know why she was camped out in an abandoned old New England cider mill.

Samantha is a treasure hunter who has returned to Knights Bridge to solve a 300-year-old mystery and salvage her good name. Justin remembers her well. He’s the one who alerted her late mentor to her iffy past and got her fired. But just because he doesn’t trust her doesn’t mean he can resist her. Samantha is daring, determined, seized by wanderlust –everything that strong, stoic Justin never knew he wanted. Until now…

New York Times bestselling author Carla Neggers’ books have been called “riveting,” “magical” and “stunningly effective.” Now she returns to the lush Swift River Valley with the irresistible story of one woman’s quest for treasure and redemption.

Carla Neggers has been spinning stories ever since she climbed a tree with pad and pen at age 11. Now she has millions of copies of her books in print in more than 30 countries, and more than two dozen of her books have placed on the New York Times, USA Today and Publishers Weekly bestseller lists. Cider Brook is the third novel in her acclaimed Swift River Valley romantic mystery series that launched with Secrets of the Lost Summer and That Night on Thistle Lane. Secrets of the Lost Summer spent four weeks on the New York Times bestseller list and garnered rave reviews, including a starred review from Booklist and a Top Pick from RT Book Reviews. Growing up in rural western Massachusetts with three brothers and three sisters, Carla developed an eye for detail and a love of a good story. Her imagination, curiosity and sense of adventure are key to creating the complex relationships, fast-paced plots and deep sense of place in her books.

CIDER BROOK by Carla Neggers is an exciting Romantic Suspense set in Knights Bridge, Massachusetts. #3 in ” A Swift River Valley Novel” series, but can be read as a stand alone. See, “SECRETS OF THE LOST SUMMER” and “THAT NIGHT ON THISTLE LANE”.

Meet Samantha Bennett and Justin Sloan. Samantha is on a quest to find or solve a 300-year old mystery at Cider Mill, she is a treasure hunter and out to redeem her good name. Justin, doesn’t trust Samantha and therefore, is having her watched.

Ms. Neggers draws the reader into her stories, with her mystery, engaging characters, suspense and her interesting and intriguing storyline. Another hit for this author. Received for an honest review.

REVIEWED BY: AprilR, courtesy of My Book Addiction and More

Thank you for your support.