Called “fun and refreshing” by NYT bestseller Rachel Gibson, Candis Terry was the first author to make the leap from Avon’s digital-first imprint, Impulse, to the traditional print and digital Avon line, with the critically acclaimed debut to her Sweet, TX series, Anything But Sweet, which was then followed by Sweetest Mistake and this summer we’ll be releasing her latest: SOMETHING SWEETER. Terry’s contemporary romances deliver unique love stories that tap directly into what readers want.

Seattle event planner Allison Lane is an expert at delivering the perfect wedding—even if she might not exactly believe in the whole “’til death do us part” thing. When her father decides to tie the knot with a woman he barely knows, Allison heads to Sweet, Texas, to make sure his new honey is the real deal. What she didn’t expect to find at the local honky-tonk was a sexy Southern man as bent on charming her pants off as he is on blowing her “true love doesn’t exist” theory all to hell.

Veterinarian, former Marine, and Sweet’s favorite playboy Jesse Wilder takes one look at Allison and knows she’s a handful of trouble he can’t deny. But even after a sizzling kiss and obvious mutual attraction, it seems Allison has no such problem. When Jesse uncovers her sweet side, can he crush his playboy image, melt her cynical heart, and change her mind about taking a trip down the aisle?

Readers are invited back to Sweet, TX with another refreshing love story featuring the picturesque Texas town. Populated by gleefully tacky individuals who’d give you the star-spangled shirts off their backs, Sweet is home to many romance fan-favorite archetypes—namely, a band of brothers…and the Wilder boys are definitely heartthrobs worth reading about!

Jackson Wilder is the epitome of everything readers crave in a hero: a cowboy-turned-war-vet-turned-firefighter with a troubled past and a heart of gold, coupled with a heroine who’s got enough fire of her own to match him. To the single women of Sweet, Texas, former Marine, Jesse Wilder, is hot, hunky perfection with six-pack abs and a heart of gold. He’s a veterinarian who loves animals, kids, is devoted to his family, and is financially stable.

The best part? No woman has yet snagged him or put a ring on his finger.

The problem? Jesse’s been down a long, bumpy road and isn’t the least bit interested in setting his boots on the path to matrimony.

Sure, Allison Lane makes a living helping others plan their big day as a wedding planner, but that doesn’t mean she has to actually believe in matrimonial bliss. Her family’s broken track record proves she just doesn’t have the settle-down gene swimming in her DNA. And though she finds Jesse fantasy material, why should she take the word of this confirmed playboy that all roads lead to “I do?” 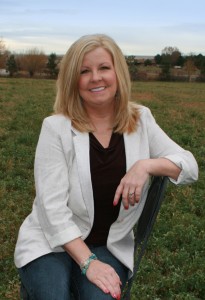 Candis Terry was born and raised near the sunny beaches of Southern California and now makes her home on an Idaho farm. She’s as warm and charming as the characters she writes about; with a lovely personality and steadily growing popularity, she is a fascinating addition to the world of contemporary romance. Candis has experienced life in such diverse ways as working in a Hollywood recording studio to chasing down wayward steers, and her quirky wealth of experience color her writing in a unique way. Only one thing has remained the same: her passion for writing stories about relationships, the push and pull in the search for love, and the security one finds in their own happily ever after. From the screen to the printed page, Candis Terry is carving out a well-deserved niche for herself in the world of hot new contemporary romance.

Please visit her on the web at www.candisterry.com.

Thanks to Kaitlyn, at HarperCollins, we are offering, 1 lucky commenter a print copy of “Something Sweeter” by Candis Terry.

Sorry, open to U.S. residents, only!