PUMP UP YOUR BOOKS AND MY BOOK ADDICTION AND MORE PROUDLY SPOTLIGHTS…. 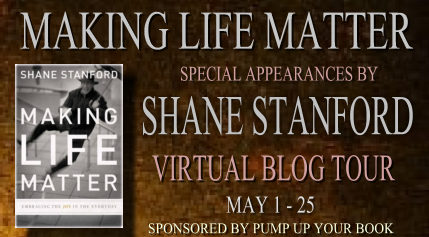 Shane Stanford is a pastor, author and teacher.  He is the Senior Pastor of Christ UMC in Memphis, TN, one of United Methodism’s largest and most influential congregations.

Shane is a former church planter as well as the Director/Host of the United Methodist Hour, a radio and television ministry airing in 30 million homes nationwide.

Shane is the author of eleven books including A Positive Life (Zondervan), The CURE for the Chronic Life (Abingdon), and Mosaic (Abingdon).

Shane has also written several articles published in such journals/magazines as Giving, CNNOnline, Alive, and The Circuit Rider.

Shane travels extensively sharing his story as an HIV positive hemophiliac and pastor.  He has presented at such venues as the Saddleback Global AIDS Summit and the National Civil Rights Museum.

He is married to Dr. Pokey Stanford (a Professor of Education) and they are the parents of three daughters, ages 14, 11, and 7.

His latest book is Making Life Matter: Embracing the Joy in the Everyday.

Check out Shane and his book at the following online locations:

In a world of fast-paced schedules and priorities, conversations about what makes for a life well lived are a rarity and a luxury. But what if the daily pace of life held in itself the way to make choices more significant? What if the daily to-do lists gave a glimpse into how people might change their future? What if the daily grind, as arduous as it might seem, held the key to a life full of meaning and potential? What if everyday, simple steps, instead of some complex list of seemingly unattainable principles, showed how to make life matter?

Making Life Matter answers these questions and shows that the steps for making life matter are found in rather ordinary decisions, attitudes, and patterns found in normal routines. Author Shane Stanford will confront the way in which God, every day, means for us to live deeper, closer, and better in him—in essence, the way God intends for life to matter.

We hope you have enjoyed our “Spotlight” guest today and will please spread the word!!

THANK YOU AND HAPPY READING!