SWIMMING IN THE MOON

SWIMMING IN THE MOON 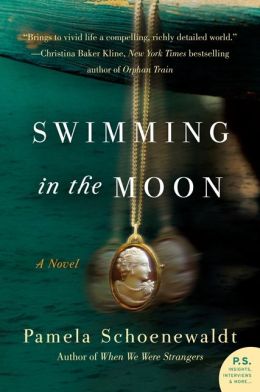 Italy, 1905. Fourteen-year-old Lucia and her young mother, Teresa, are servants in a magnificent villa on the Bay of Naples, where Teresa soothes their unhappy mistress with song. But volatile tempers force them to flee, exchanging their warm, gilded cage for the cold winds off Lake Erie and Cleveland’s restless immigrant quarters.

With a voice as soaring and varied as her moods, Teresa transforms herself into the Naples Nightingale on the vaudeville circuit. Clever and hardworking, Lucia blossoms in school until her mother’s demons return, fracturing Lucia’s dreams.

Yet Lucia is not alone in her struggle for a better life. All around her, friends and neighbors, new Americans, are demanding decent wages and working conditions. Lucia joins their battle, confronting risks and opportunities that will transform her and her world in ways she never imagined.

Pamela Schoenewaldt lived for ten years in a small town outside Naples, Italy, an experience which inspired her first historical novel of immigration, When We Were Strangers. Translated into three languages and short-listed for the Langham Prize in Historical Fiction, the novel was a Barnes and Noble Great Discoveries Selection.
Swimming in the Moon, her second novel, weaves themes of immigration, vaudeville, mental illness and the 1911 Cleveland Garment Workers Strike.
Pamela lives in Knoxville, Tennessee with her husband, Maurizio Conti, a physicist and Jesse, their philosopher-dog.

Read excerpts, reviews, check out the photo gallery, or get in touch at www.PamelaSchoenewaldt.com

Thanks everyone for stopping by today….

One Reply to “SWIMMING IN THE MOON by PAMELA SCHOENEWALDT~ SPOTLIGHT….”