“Forever Mine” by Monica Burns 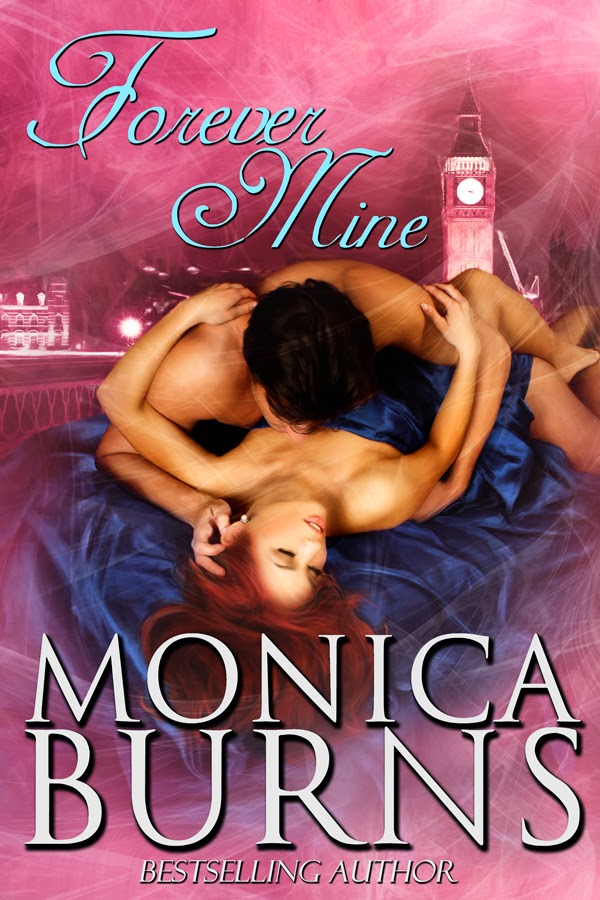 Forever Mine
By Monica Burns
Blurb:

Her future lies in the past

When a bomb explosion thrusts Victoria Ashton backward in time to 1897, she’s forced to

impersonate the Countess of Guildford. Despite Victoria’s attempts to convince the earl she’s not his wife, her counterpart’s infidelity, lies, and ill-tempered personality makes the task almost impossible. Worse, Victoria finds herself falling in love with a man who loathes her. Only when the earl learns to trust her does she realize her future lies in the past. But love always comes at a price, and she must make a painful sacrifice in order for them to be together.

Her love is what will save him

Nicholas Thornhill, Earl of Guildford has been searching for his missing wife for three weeks. Rumors of him being guilty of murder make him unwilling to believe his wife’s latest in a multitude of lies. But the changes in Victoria continuously surprise him. Despite his best intentions, he finds the contempt he once felt for his wife turning into something deeper and stronger. But when danger threatens to separate them forever, he must forge a bond with her that crosses the boundaries of time.

A passion to last forever

Available for pre-order at

Barnes & Nobles:
http://www.barnesandnoble.com/w/forever-mine-monica-burns/1120845971?ean=2940150192263
Excerpt
Despite the way he unnerved her, it was impossible to avoid noting how wonderful he
smelled. It was a spicy, potently male scent. Deep inside her, a voice cried out for her to press
her fingers against his beautiful mouth. The thought made Victoria suck in a quick, sharp breath
of air. Nicholas’ eyes darkened with an emotion she didn’t even want to consider defining.

Slowly, he lowered his head until his mouth lightly touched hers. Fire streaked across her
skin, its warmth sinking into her pores until it heated her blood like molten lava. She sighed then
parted her mouth to lace his lips with the tip of her tongue. A dark sound rumbled in his chest as
his tongue swept its way into her mouth and imitated an act her body suddenly craved as if she
were starving.

Pleasure swept its way through her. The fiery sensation of it settled into every inch of her
body. He said she’d bewitched him, but she was the one under his spell. His lips teased and
seduced hers until her body screamed for more.

She wanted him to touch her. Needed him. She arched her hips upward in a silent plea for
his touch, and a dark growl vibrated on her lips as he tugged the covers off her. His tongue
swirled around hers, teasing and taunting her with each tantalizing stoke. The hot taste of him
made her nipples grow hard until they ached with a pleasurable, tantalizing sensitivity. Eager to
assuage the need for his touch, she caught his hand and pressed it to her breasts. A growl
rumbled out of him as he rubbed his thumb over the rigid peak. The sensation of soft linen
between her skin and his hand made her moan softly as his mouth worked its way across her
cheek to her neck where he gently nipped at her skin.

Need spun through her, and as he lifted his head to stare down at her, she saw desire
darkening his green eyes. A knot of anticipation tightened in her lower body as his hand left her
breast and slid downward to her stomach where the heel of his hand pressed into the sensitive
spot at the apex of her thighs. The simple pressure made her suck in a sharp breath, and a small
smile curved his lips.

“I want to watch you as I make you shatter from my touch, Victoria.” His words
whispered across her senses as his hand pulled the hem of her nightgown upward to expose her
completely.
About the Author

A bestselling author of spicy historical and paranormal romance, Monica Burns penned her first short romance story at the age of nine when she selected the pseudonym she uses today. Her historical book awards include the 2011 RT BookReviews Reviewers Choice Award and the 2012 Gayle Wilson Heart of Excellence Award for Pleasure Me. She is also the recipient of the prestigious paranormal romance award, the 2011 PRISM Best of the Best award for Assassin’s Heart. From the days when she hid her stories from her sisters to her first completed full-length manuscript, she always believed in her dream despite rejections and setbacks. A workaholic wife and mother, Monica believes it’s possible for the good guy to win if they work hard enough.
You can find Monica here:

MY THOUGHTS:
FOREVER MINE by Monica Burns is a unique Scottish Historical Victorian Time-Travel Romance with a bit of Paranormal element set in present time to 1897. Meet, Victoria Ashton, Countess of Guildford and Nicholas Thornhill, Earl of Guildford and a passion that lasts forever, literally.
Well written with a unique take of romance, time,passion, tragedy,danger and a powerful love story that spans generations and though time. Even, though the lies, betrayal, ill tempers, and the possibility of murder, the Earl of Guildford, Nickolas, can’t stop from being attracted to the present day Victoria.
Time Travel, is not usually my foray, but, I have to say, FOREVER MINE is a must read. It is powerful, compelling, passionate, and a must read. I have enjoyed every single story Ms. Burns has written thus far, and have to say FOREVER MINE, was no exception, and fact I am now a believer of the Time-Travel genre. The chemistry
between the present day Victoria and Nickolas is astounded, powerful and very passionate. Even through time and generations, their love could not be denied. I would highly recommend FOREVER MINE to Historical readers as well as Time-Travel,and Romance readers. A terrific read from the first blast from an explosion to the very last page and beyond, we all wish to have this kind of love story. Powerful and compelling!! Well done!
*Received for an honest review from the author and/or publicist*
Rating: 4.5
Heat rating: Hot
Reviewed by: AprilR, courtesy of My Book Addiction and More