After eighteen-year-old Carrie Jacobson discovers she was a witch in a previous life, she seeks to reawaken that part of her soul. With the help of an eccentric enchantress and a boy who is more than he seems, Carrie succeeds and is spellbound by the memories of her life in Europe during the 1600s as a powerful witch named Isadora. Carrie reverts to her bewitching, more volatile form and sets out to break a curse she cast long ago on her coven.

Carrie’s boyfriend Tree cannot help feeling uneasy about the changes he sees in the woman he loves. When Carrie’s past clashes with the present and dark magic intoxicates her once again, Tree must take drastic matters into his own hands and attempt to save Carrie from herself.
With Tree’s help, will Carrie be able to resist the allure of her new powers? Or will she plunge into the deep end and give into them?
Note to readers
Tangled Roots can be read as a standalone novel. I wrote it for the fans of the Beyond the Eyes trilogy because a lot of them are fond of Carrie and Tree, who are the two main characters in this tale. Besides, their story adds to the trilogy, where it’ll take you deeper into the rabbit hole.
Enjoy!

TRUST: A TWISTED WOLF TALE — Rene Folsom
Beau Shapiro has spent his whole life being called gorgeous, handsome, sexy… every word imaginable to describe his outer appearance. But despite his popularity, he never once lets it all go to his head. He’s holding out for that one girl that has it all—beauty and personality.
While out searching for his father, Beau meets Karoline—a woman cursed to be a beast. Striking a deal with her to save his father’s life, Beau is taken to Karoline’s home deep in the mountainous woods to live with her. During his stay, he finds that there’s beauty within the beast, and slowly, for the first time in his life, falls in love.
Delve into the story of Beau and Karoline, a modern-day retelling of the classic tale Beauty and the Beast.

Now an international bestseller. Fans of Twilight and Interview with the Vampire will enjoy this paranormal adventure that spans the centuries. On her sixteenth birthday, Madison Greene inherits a huge mansion house… but the house hides a secret. Eighteen-year-old Alexandre lives in 19th century Paris. Spoilt and bored, he longs for adventure, but he should be careful what he wishes for. Madison and Alexandre’s lives are about to collide… Falling in love has never been so dangerous.

Neeko sees Gabby and immediately knows she is someone special. He makes a rash decision to kidnap her, because he can’t stop thinking about her. Now he must somehow prove to her that she is his mate and his soul’s other half. How can he have a human for a mate? Can he keep her safe from Demons? Or is he her biggest threat?

When the missing pieces fall into place to reveal all their secrets, will they stand together or apart?

FALLING FOR HEAVEN — Anne Conley
Uriel is one of God’s Four Winds, the Archangel of Destiny. He has helped thousands of people throughout the ages find their destiny according to His will. This time however, what he doesn’t realize, is that it’s his own destiny he’s supposed to fulfill.
Heather is an exotic dancer, whose stage name is Heaven. It’s not what she’s always wanted to do, but it helps her pay the bills, and she’s got a lot of bills, with taking care of her mother and her sister. When the mysterious Uriel comes into the club, she can tell he’s different — just how different will rock her world…

SAVE MY SOUL — K.S. Haigwood
Kendra Larkin had everything going in the right direction. Her life was seemingly perfect, and she wouldn’t have changed a thing about it. Unfortunately, the course of her life was about to be forever altered. A tragic rappelling accident lands her on Dr. Adam Chamberlain’s operating table.
She agrees to a deal proposed by a guardian angel to help save the soul of the man who is both her doctor and soulmate. If she is successful, she gets to keep her life. However, she later learns that it isn’t just her life that’s in jeopardy, but her soul as well.
Even with the help of her handsome guardian angel, Rhyan, it seems there is no happy ending in sight. Torn between her newly discovered love of Rhyan, and the undeniable attraction she has for Adam, Kendra finds herself at a crossroad. With Adam’s steadfast rejection of God, and his guardian demon conspiring against her, she fears her soul may already be lost.
Will she find a way to overcome the evil her life is suddenly burdened with? Or will Adam’s guardian demon win both their souls and make Kendra his own personal puppet in Hell?

THE SNOW CRYSTALS — Kendra Hale
They glittered and sparkled in the soft white light of the full moon. They came slowly at first, then built up momentum. Like confetti tossed over a bride and groom at a wedding, the most perfect snow crystals fluttered and danced on the gentle breeze and descended on and around him. Instinctively, he knew that something magical had happened tonight.
The lives of best friends and cousins, Aidan and Donald, are largely successful in all but love. A Christmas shopping trip turns awry when a disturbed stalker latches onto them. Will they be able to escape her clutches and find real love, or will a woman with murder on her mind kill them both?
Snow Crystals is a sweet romance with a paranormal touch, which takes the reader along on the trail of a mystery set in one of the most picturesque landscapes in Britain: the Cotswolds. Written in a no-nonsense voice, with beautiful descriptions, an addictive cast of characters and a light hint of thriller, this book would be a perfect trip down memory lane or for those who love stories set in England.

WEIRD: A HENRY IAN DARLING ODDITY: MISSIVE ONE — Julie Elizabeth Powell
Henry Ian Darling is a collector of oddities, those that bring him closer to an enigma, one he hopes will be a great thing. But maybe it isn’t?

WEIRD: A HENRY IAN DARLING ODDITY: MISSIVE TWO — Julie Elizabeth Powell
What is the significance of what Henry Ian Darling found in the boot of a car? And how did his wife know of the event? How could anyone be cruel enough to do such a thing?
Find out where the discovery leads this collector of oddities and what it may mean for Henry’s ultimate quest – finding the enigma, that which will save or destroy all dimensions.

MARY HADES — Sarah Dalton
Not many seventeen year old girls have a best friend who’s a ghost, but then Mary Hades isn’t your average teenager.
Scarred physically and mentally from a fire, her parents decide a holiday to an idyllic village in North Yorkshire will help her recover. Nestled in the middle of five moors, Mary expects to have a boring week stuck in a caravan with her parents. Little does she know, evil lurks in the campsite…
Seth Lockwood—a local fairground worker with a dark secret—might be the key to uncovering the murky history that has blighted Nettleby. But Mary is drawn to him in a way that has her questioning her judgement.
Helped by her dead best friend and a quirky gay Goth couple, Mary must stop the unusual deaths occurring in Nettleby. But can she prevent her heart from being broken?
The first in a series of dark YA novels, Mary Hades follows on from the bestselling Kindle Single ‘My Daylight Monsters’. A spine-tingling tale with romance, readers will be shocked and entertained in equal measure.
With some scenes of horror and some strong language, this book is best suited for readers aged fifteen and up.

THE PERFECT SPIRIT — Traci Hayden
28 year old writer, Vanessa Fortney, has travelled the world, living life to the fullest. When she comes home due to the unexpected death of her only blood relatives, she only has one regret; never finding a love that triumphs all others.
In a beautiful valley in the Rocky Mountains, Nessa finds herself wondering about a mysterious stranger who saved her after a nearly disastrous car accident. The mystery that surrounds Daniel is quickly replaced by the increasing attraction Nessa feels for him.
Will she find that love that transcends all love or will an unforeseen tragedy keep them apart?

ENCOUNTER — Cherime MacFarlane
She never picks berries in the patch behind the cabin. That place almost makes her skin crawl. The old cabin has been in her family for generations. There is a mystery about the place the elders never said much about. All she knows it that a young couple living there vanished without a trace.

Nicholas comes up behind me. His breath on my neck sending chills through my body, causing my breasts to perk instantly. He gently runs his hands from my shoulders down to my panties, which is all I have left on, kissing my neck as he goes.

He leaves a trail of kisses down my back and on my ass as he guides my panties to the floor. His hands explore familiar territory; as one cups my left breast, massaging it, and tugging lightly on the nipple, the right hand is busy kneading my sex and running his hand back and forth through my folds.

Kristie Haigwood (a.k.a. K. S. Haigwood) is currently writing her 8th novel. She lives in Arkansas, US. She is the mother of 2 awesome kids and 2 great dogs. She is happily married to her soulmate who thinks reading is a solid waste of time. Opposites attract. Kristie’s works include Save My Soul, Hell’s Gift, Good Side of Sin, Forbidden Touch, Accepting the Moon, Eternal Island, Eternal Immortality, Eternal Illusion. The Last Assignment, My Sweet Purgatory, Midnight Moonrising & Eternal Innocence are all coming very soon. 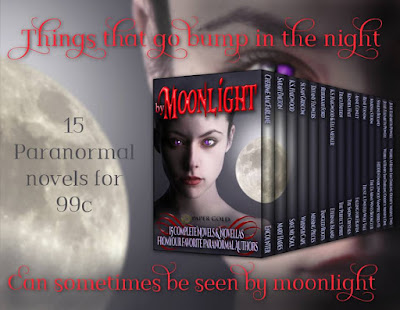