The final installment in the “Breathless” Trilogy….

*All images and information used with prior permission*

MBA&M: Good morning, Maya and welcome to MBA&M. Please tell our readers, who may not know you a few tidbits about yourself?
MB: I live in the south with my husband, three children and several furbabies. I have six kitties and two dogs, a sheltie and an English Mastiff who is HUGE but still thinks he’s a lap dog. When I’m not writing (which isn’t often!) I love to travel with my family and hunt and fish.
MBA&M: “BURN” is book 3 in the “Breathless Trilogy”, what do you feel is the appeal of this series to readers?
MB:It’s hard to know what readers think, but I would assume that they enjoy the stories because they’re emotional, character driven stories. All of my books, no matter what genre are always emotional reads. They are what I love to read so it stands to reason that it’s what I would write. I love a really over the top, angsty, cracktastic story!
MBA&M: Using one word, describe the following these characters in the “Breathless” Trilogy….
Ash McIntyre : Intense
Jace Crestwell : Passionate
Gabe Hamilton : Brooding.
Josie: Creative
Bethany: Kind-hearted
Mia Crestwell: Loyal
MBA&M: Who was your favorite character to write?Why?
MB: Ash and Josie were my two favorite characters to write. I always knew that Ash would be more intense than Gabe and Jace even though he outwardly APPEARED to be more laid back and easy going. So it was fun to get to the heart of him and show readers the “real” Ash.
MBA&M: Do you feel readers should read the “Breathless” Trilogy in order, “Rush”,”Fever” than your latest release, “Burn” or can they be read as stand alones?
MB: Oh they can definitely be read as stand-alones, however, I think readers would ENJOY them more if they read them in order simply because you get to meet characters of future books in that very first one and you get to see them over the span of the three books and follow along with some of the secondary characters, like Caro, Mia’s best friend, and her progression in her relationship with her boyfriend, Brandon.
MBA&M: What is next for you?
MB: I have a new trilogy releasing in 2014 called the SURRENDER TRILOGY and it will follow a similar track as the Breathless trilogy so readers can expect all three books to be released in 2014. I’ll be posting covers and blurbs later in August.
MBA&M: What is your biggest accomplishment in your writing career?
MB: If you look at “performance” than I’ve hit several career highs in 2013 with Shades of Gray, the 6th book in the KGI series hitting #4 on the NYT bestseller list. And then when FEVER released in April, it hit #2 on both the NYT and the USA Today bestseller lists, so that was really exciting. However, for me the biggest accomplishment PERSONALLY is simply every single time I get to the end of a book I’m writing. There is no bigger sense of accomplishment than finishing a book because every time I start one I feel like I’ll never be able to write as good as book as the last one and that I’ll never get to the end.
MBA&M: Why writing a series/trilogy, do you get lost in your characters/stories?
MB:  do. I get absorbed in them and they live in my head constantly. I’ll go to bed at night thinking about them and I’ll find myself thinking about during the day when I’m not writing and I’m always eager to get BACK to them.
MBA&M: What do you do to escape the world of writing and relax?
MB: I love to read and I find that reading is actually the best way to recharge the batteries after coming off a string of back to back deadlines. There is nothing more satisfying than reading a really yummy romance that gives me a happy sigh as I’m reading it.
MBA&M: Where can readers find you and where may they purchase “Burn”?
MB: Readers can find me on twitter (@maya_banks) or on Facebook (www.facebook.com/authormayabanks) or on my website, www. Mayabanks.com and they can purchase Burn at any online retailer in digital or print and at stores like Target, Barnes and Noble, Books a Million and lots of independent bookstores across the country.
Thank you, Maya for stopping by a spending time with us and our readers today!

A Bit About the Author:

Connect with her at: 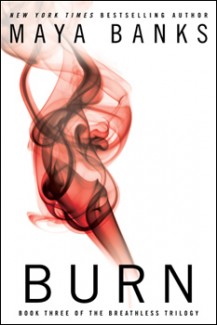 Ash, Jace, and Gabe: three of the wealthiest, most powerful men in the country. They’re accustomed to getting anything they want. Anything at all. For Ash, it’s the woman who changes everything he’s ever known about dominance and desire…

When it comes to sex, Ash McIntyre has always explored his wilder side—extreme and uncompromising. He demands control. And he prefers women who want it like that. Even the women he’s shared with his best friend, Jace.

But Jace is involved with a woman he has no intention of sharing. And now even Gabe has settled into a relationship with a woman who gives him everything he needs, leaving Ash feeling restless and unfulfilled.

Then Ash meets Josie, who seems immune to his charms and his wealth. Intrigued, he begins a relentless pursuit, determined she won’t be the one who got away. He never imagined the one woman to tell him no would be the only woman who’d ever drive him to the edge of desire.

Gabe, Jace, and Ash: three of the wealthiest, most powerful men in the country. They’re accustomed to getting anything they want. Anything at all.

The Breathless Trilogy in order:

~~~~~
~GIVEAWAY ALERT~
(Sponsored by the publicist and/or publisher)
Thanks to Caroline, at Sullivan and Partners, LLC, we are offering 1 lucky commenter a print copy of “Burn” by Maya Banks. Giveaway open to US and Canada residents only! Giveaway will run from August 5 until August 12,2013.

GOOD LUCK EVERYONE!
~~~~
~STAY TUNED~
“My Thoughts” on this title to follow soon on www.mybookaddictionreviews.com.
Please stop by and check it out!
~~~~~
Thanks everyone for stopping by today and please spread the word if you feel inclined.

~~IT IS WITH GREAT PLEASURE WE AT MBA&M WELCOMES~~ 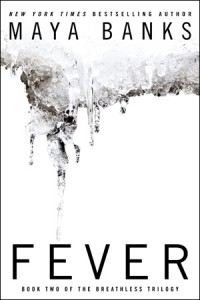 SO WITHOUT FURTHER ADO,WELCOME, MAYA….

MBA&M: Please tell our readers a few interesting facts about Maya Banks,the author?
MAYA: I’m likely the most boring, normal person on the face of the earth 🙂 I work long hours, so I hole up in my “cave” a lot and I usually only make it out to my daughter’s softball tournaments or my middle son’s baseball games. I’m a homebody at heart, and my favorite place to be is at home, surrounded by my family.
MBA&M: Where did the inspiration behind the “Breathless” trilogy come from?

MAYA: The Breathless trilogy is inspired by my Harlequin Desires and my Sweet Series. I blended elements from both kinds of stories and incorporated them into RUSH, FEVER and BURN.
MBA&M: Which was the hardest scene to write in “Fever” and why?

MAYA: The scene where Bethany almost takes the pill and it nearly breaks her and then when she tells Jace what she almost did and that if this is what their relationship does to her that she doesn’t want it. It was very emotional!
MBA&M: Who is your favorite character in the “Breathless” trilogy so far,why?
MAYA: Probably Ash, just because he has so many hidden layers and the face he presents the world is not at all who he is 🙂
MBA&M: How hard is it to write the sensual scenes?
MAYA: VERY hard. They’re the hardest of any scene to write because they have to be done “just right” and they can’t be hurried or rushed. They have to contain emotion or they come across too clinically. And they have to convey the tone and mood of the story at the time that the love scene takes place. Which means that every love scene has to be different because they take places at different points of the story and relationship.

MBA&M: Which character do you feel has grown the most in both “Rush”, and  “Fever” and which will come into their own in the next title?

MAYA: I definitely think Gabe has done the most growing and changing. He went from a very cold, unfeeling person who approached relationships very clinically and with distance. Mia changed everything about him and his approach.
MBA&M: Who is your favorite secondary character and why?
MAYA: Mia’s group of friends are a lot of fun, and I enjoy writing them 🙂
MBA&M: Please tell our readers where to connect with you and where they may purchase “Fever”?
MAYA: You can always out about me on my website, www.mayabanks.com as well as keep up with all the latest news on upcoming and new releases. You can also find me at my Facebook page where I hang out with readers and often post snippets of books I’m working on. www.facebook.com/authormayabanks and you can also follow me on twitter! www.twitter.com/maya_banks
Thank you, Maya,for taking a moment of your time to visit with us and our readers today. What a pleasure to have you!
———————————————————————————————–

The Breathless Trilogy in order:

Jace, Ash, and Gabe: three of the wealthiest, most powerful men in the country. They’re accustomed to getting anything they want. Anything at all. For Jace, it’s a woman whose allure takes him completely by surprise…

When they meet Bethany, Jace begins to feel things he’s never experienced before: jealousy, and a powerful obsession that threatens him, overwhelms him—and excites him beyond control.

Jace isn’t sharing Bethany—with anyone. He’s determined to be the only man in her life, and it’s jeopardizing a lifelong friendship with Ash. Bethany will be his and his alone. Even if it means turning his back on his best friend.

Fever is in the series Breathless Trilogy

“My Thoughts” on “Fever”

Remember to spread the word on this amazing series and author!