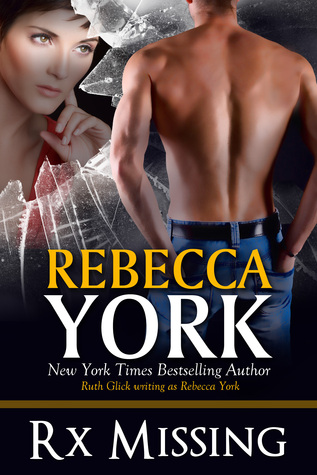 After bailing out of his fighter jet, Mack Bradley wakes up in a luxury hotel with a bunch of guests who, like him, have no memory of how they arrived. He’s drawn to one of them, Lily Wardman. But can he trust her or anyone else in this strange environment where hidden dangers lurk? And what happens when Mack’s brother, Grant, mounts a desperate search to find him?

Ruth Glick (born 1942) is a best-selling author of healthy cookbooks and has also written dozens of romantic suspense romance novels under the pen name Rebecca York.

Ruth earned a B.A. in American Thought and Civilization from George Washington University and an M.A. in American Studies from the University of Maryland. Although she always wanted to become a writer, Glick was convinced that her lack of spelling skills meant that her goal was unattainable. As a stay-at-home mother, she took a community college course to help her choose a career. The course made it very clear that writing was her primary interest. Glick began writing articles for newspapers and magazines, but after several years decided to try writing fiction. Her first book, a kids’ science fiction book, was finally purchased by Scholastic Inc..

Since then, Glick has become a highly successful author of over 50 romantic suspense and paranormal novels. Many of her novels are published under the Harlequin Intrigue line, and in June 2003, she became one of the first authors published under Berkley’s new Sensation imprint. Before 1997, she often collaborated with Eileen Buckholtz and Kathryn Jenson.

Glick also is a highly regarded author of cookbooks focusing on healthy eating. She sometimes hires trained chefs to test the recipes that she creates, and makes sure that every recipe is tested at least three times before it appears in one of her cookbooks.

Glick is the head of the Columbia Writers Workshop. She and her husband, Norman Glick, live in Columbia, Maryland, where Ruth collects rocks, and enjoys cooking, walking, reading, gardening, travel, and Mozart operas. They have two grown children, Elissa and Ethan, and two grandsons (Jesse and Leo).

MY THOUGHTS:
RX MISSING by Rebecca York is a unique Paranormal Romantic Suspense/Mystery.
“Decorah Security” #8, but can be read as a stand alone. A unique tale, that is well written, fast paced, exciting and intriguing. Mack Bradley and Lily Wardman find themselves in a luxury Hotel, with no memory if how they got there, but danger lurks. While, Mack’s brother, Grant, launches a desperate search to find Mack, Mack and Lily find they are drawn to each other in more ways than one. Sparks fly.
Fast paced tale, with many facets to the story and the characters. I found this story to be engaging and intriguing, well paced, as well as well written with fantastic, well developed characters. The storyline was unique in concept and with the premise of romance and finding love.
Fans of the T.V. series, “Twilight Zone” will definitely enjoy “Rx Missing”. Paranormal Romance fans as well as Mystery and Suspense lovers, will enjoy as well, I believe.
*Received for an honest review from the publicist and/or author*
*Cross-posted on My Book Addiction and More*
Rating: 4
Heat rating: Mild
Reviewed by: AprilR, courtesy of My Book Addiction and More