Diana Lloyd, mother of gingers, first of her name, is a stay-at-home wife, a hockey mom, and writer of stories with kissing in them. Diana defends her writing time like a rabid goalie while simultaneously volunteering for things she doesn’t really have time for. Diana is a member of Hearts Through History chapter of Romance Writers of America and was a 2017 RWA Golden Heart Finalist. Her Regency romp, HOW TO TRAIN YOUR BARON, the first book in the “What Happens In the Ballroom” series, is scheduled for publication in July 2018. Connect with Diana on Twitter at @DianaLloydBooks, or give her a shout-out on Facebook at www.facebook.com/DianaLloydBooks.
Connect: Site | Facebook | Twitter | Goodreads 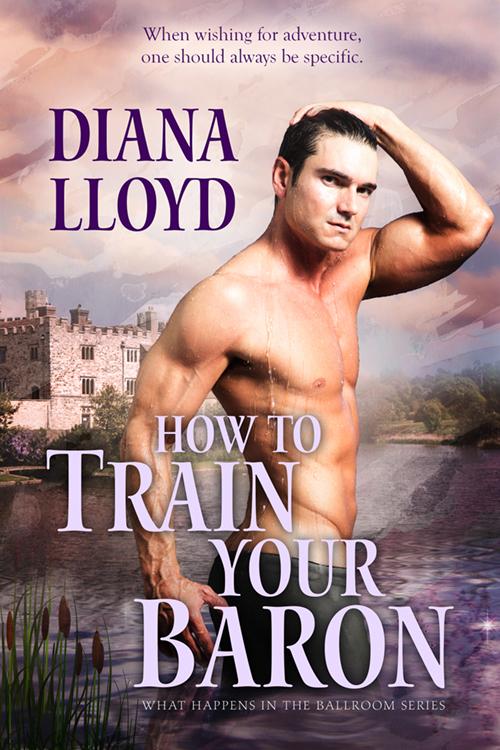 When Elsinore Cosgrove escapes a ballroom in search of adventure, she has no idea it will lead to a hasty marriage. The youngest daughter of a duke, all she wants is to make her own choices. Now she’s engaged to an infuriating, handsome Scottish baron who doesn’t even know her name! Using all her feminine wiles, along with advice gleaned from a training guide for hunting hounds, Elsinore is determined to mold her baron into the husband she wants.
Quin Graham is a man with many secrets. If another scandal can be avoided with a sham marriage, so be it. Only his fiancee isn’t at all what he expected and the clumsy, curious, and clever Elsinore refuses to be set aside. For reasons he’s unwilling to explain, the last thing Quin needs is to fall in love with his wife.

Quin paced the drawing room of his rented townhouse like a caged animal, fighting the urge to punch something—a wall, the fireplace…a duke. He snatched an open bottle of whisky off the writing desk on his next circuit across the room and took a long swig. The liquid burned a

trail down his throat and settled into an angry puddle in his gut.

Why on earth had the daft lass kissed him? That too brief kiss was full of hope and promise and all the unspoken words in a lover’s glance. At least it was to him. If only she hadn’t looked at him with those guileless eyes, if only she hadn’t smiled at him so sweetly and spoke to him so earnestly. Quin sighed. He should have walked away and left her to be someone else’s problem.

He took another long pull of the whisky, emptying the bottle. As of this evening, his options had dwindled to either marriage or a duel with a duke. It rankled nearly beyond his tolerance to have his hand forced by a woman. His last encounter with a conniving female had led him to his current…predicament.

Quin smiled ruefully, it was such an innocuous sounding word for the mess his life had become. Betrayal, murder, misery—all summed up into that one harmless sounding word by the man he’d hired to investigate it. The word did so little to convey the hell he was enduring. And yet, no one must know.

Quin reached inside his jacket pocket, pulled out a silver portrait case, and snapped it open. A miniature of his son occupied one side, the other was empty. He could never bring himself to put her picture there, even before—well, even before everything. He’d made the charcoal portrait of his son less than six months ago. It showed a chubby, happy toddler with bouncing curls and a wide slobbery grin.

Little had he known when he’d drawn it, that other than a granite headstone, the sketch would be the only tangible evidence that his son had existed at all.

My thoughts
How to Train Your Baron by Diana Lloyd is a book 1 in a new and exciting series,”What Happens in the Ballroom”.  “A Regency romp mash-up of Cinderella and Humpty-Dumpty.”
A fun, entertaining and intriguing story with a calamity of mishaps, adventure, humor, witty banter, suspense and intrigue, makes for some hilarious moments.
This is the story of  Lord Quin Graham, a Scottish baron and Elsinore Cosgrove, the daughter of a duke, and their hasty marriage,  after being found in a compromising position. Set in the ballrooms of the England to the Scottish highlands, readers will find themselves turning pages and laughing out loud, but there are also moments of danger, plenty of mystery, suspense and intrigue.  Well written, well crafted with engaging and entertaining characters.  The storyline flows seamlessly and effortlessly.  I absolutely loved HOW TO TRAIN YOUR BARON and look forward to more from Diana Lloyd  What an impressive debut book/author!!
“I voluntarily received a complimentary copy, however,  these are my honest opinions. I was in no way required nor compensated to write a review.”
Rating: 4.5
Heat rating: Sweet
Reviewer: AprilR