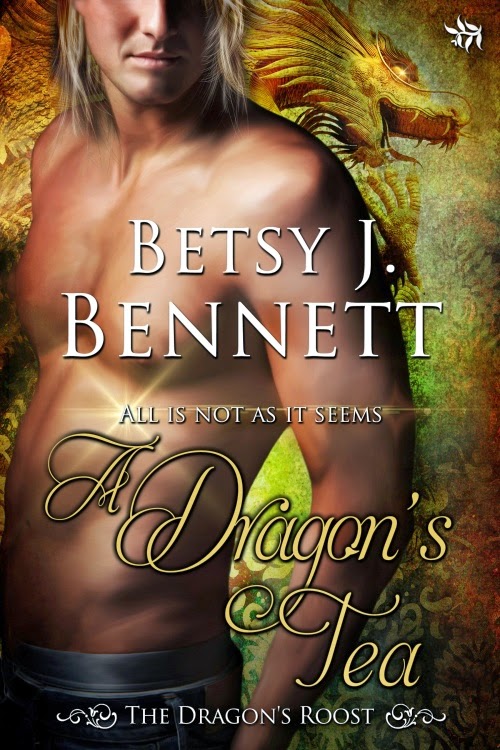 Blurb: *From the publicist*

He’s a Dragon. Lori Lawrick runs to her aunt’s bed and breakfast after she realizes the man she’s been dating is a murderer. There she meets Bryan MacLauchland. He fascinates her and she is instantly drawn to him. Byron hides a secret. He is a dragon who crossed worlds centuries ago and landed here on Earth. He also can be a teapot, forced to provide tea to any mortal who asks. She’s a woman who likes to play with fire. The Bed and Breakfast Dragon’s Roost Inn sits at the nexus of worlds, and Byron is one of the forces guarding it from evil. Lori’s former boyfriend Andrew is a wizard intent on taking over the Inn in order to gain more power. He had planned on using Lori to achieve those goals. Byron is wounded defending the Inn, and Lori must save his life. While doing so, she discovers that she is a powerful witch, able to close portals, a skill few others possess. Nothing is as it seems. As she sips tea from a dragon shaped teapot, Lori starts to understand Byron and her own confused emotions. Together Lori and Byron fight to keep the Inn safe and to ignite this love growing between them.

Purchase your copy! A Dragon’s Tea is available now from Amazon UK, Amazon US, Smashwords

Betsy J. Bennett lives in Michigan with her husband, two adult daughters, three obnoxious cats and an English bulldog. She has five grandchildren. She collects dragons, creche’s and Santas. She has always believed in Christmas and in Santa, and although she has yet to meet the real Santa, she has hope that with the publication of this book he’ll seek her out. She is currently at work on her next novel.

Lori Lawrick, running from an ex-boyfriend, Andrew,who not only may be a murderer, but he is a wizard, intent on using Lori to get what he wants, the Dragon’s Roost, her aunt’s  Bed and Breakfast Inn, which is situated on the nexus of worlds. And Bryan MacLauchland, a dragon who can turn himself into a teapot, yes, you heard correctly a teapot, when someone wishes tea. He has been wounded in a fight to save the Inn. Lori discovers she is a witch, who possess a unique and powerful, power, she can close portals. Nothing is as it seems at the Dragon’s Roost.

Lori and Bryan have a powerful attraction, more than just lust, but a passion few find together. Together, they must fight to save the Inn, and come to grips with their own powerful emotions and survive the battle that is coming.

A magical tale where worlds collide, passions fly, and love blossoms. A delighted tale of magic and love. An intriguing tale with engaging characters and an intriguing storyline with a bit of mystery interweaves magic, danger, and love into the story. Received for an honest review from the publicist.

Reviewed by: AprilR,courtesy of My Book Addiction and More