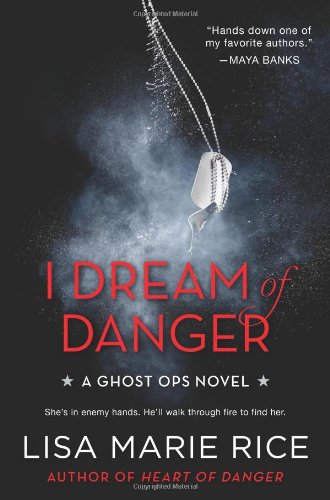 “I DREAM OF DANGER”

WHAT A WONDERFUL SURPRISE….

LISA MARIE RICE  HAS DROPPED BY FOR A VISIT!!

I DREAM OF DANGER

A lot of my readers have asked why I set the Ghost Ops series in the future. Mind you, I didn’t set it in the far, far future where life has evolved beyond recognition. We have two heads and machines eat and digest for us and we have transporter beams and live on Mars. No, the series—HEART OF DANGER, I DREAM OF DANGER and BREAKING DANGER—is set about 10-12 years from now, in a recognizable future with cool gadgets.

The short answer to why I set a series of books in the near future is that I wanted to make Steven Spielberg Governor of California. How cool is that?

And I wanted to create fabulous new toys for my guys to play with. If you’ve read the first two books you know that Mac, Nick and Jon have been falsely declared to be outlaws and they are on the run. They set up a high-tech outlaw community known as Haven, much like outlaws in the Old West had a community of their own—Hole in the Wall. But Haven isn’t a hole in the wall. It offers every comfort imaginable and fabulous perks. For example, at the touch of a button, all the walls can turn into holograms of the surrounding beautiful California mountainscape taken from remote sensors ringing the compound. So your wall can turn into a dawnscape, a sunset, a winter landscape, anything you want.

They have Stealth everything—body armor that shields from IR and thermal imaging, that is lightweight but completely bullet proof. Two nifty Stealth helicopters that can’t be seen on radar and are almost soundless.

They can – and do—infiltrate almost any place undetected. They are in and out and no one knows.

The coolest aspect, to my mind, is their utter self sufficiency. They have plentiful water supplies and are completely self sufficient in energy, thanks to heliostats (powerful solar panels) and geothermal energy. They grow most of their vegetables in hydroponic vats and have vast food reserves in underground caves.

They have a community they have grown to love and their women are in Haven. They will fight and die to protect it.

And it will come to a fight as a deathly danger grips the world.

Thank you, Lisa, for your visit with us and our readers today!

I Dream of Danger

They are the Ghost Ops: a covert squad of super-elite soldiers. After their team was betrayed and massacred, the three surviving members went underground and built Haven, a community of misfits and geniuses. Now they’re at a crossroads, facing a new threat capable of destroying everything they hold dear.

When Nick Ross disappears from Elle Thomason’s life, she is certain she’ll never see the man she loves again—except in her dreams. Ten years later, as a respected researcher breaking new ground in psychic phenomena, she sends a desperate call for Nick’s help. One by one, her colleagues have started disappearing . . . and Elle knows she’s next. An elite soldier, Nick never meant to hurt Elle, duty kept him away—and then she vanished. Now troubled by unusually vivid, disturbing dreams of Elle in danger, Nick will rescue the only woman he’s ever wanted and bring her back with him to Haven.

Though powerful men are after Elle and her special abilities, Nick will die before leaving her side again.