Playboy-vintner Michael Santino’s world is about to go up in flames. The largest wildfire in California history is racing straight for his precious vineyards.
​
But the fire isn’t what’s making him hot and bothered— it’s Shae.
The beautiful firefighter he’s never forgotten is on the scene, re-igniting sparks and making it impossible for him to think straight. Now he can’t remember why he broke up with her.
​
Firefighter extraordinaire Shae Hayes is determined to evacuate Santino Winery.
​
Strong and proud, and from a long line of heroes, she’s not taking no for answer—even if it is from Napa Valley’s own Mr. Charming. The devastatingly handsome sweet- talker is the only man who turns her insides to jelly.
​
When the wind changes and Engine 6 is stationed at Santino Winery, Shae and Michael begin to melt in close quarters, and their chemistry ignites.
​
Is it the firestorm outside or the flames smoldering in their hearts that has them clinging to each other?
They’ll soon have to decide if
LOVE IS A WILDFIRE.
Coming August 7th!
PRE-ORDER HERE: 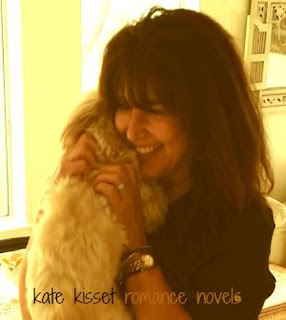 Former San Francisco radio disc jockey Kate Kisset is passionate about telling great stories.
After playing thousands of Pop, Country, Rock and Oldies tunes, for her primarily female fan base, she changed her tune and became an author.
Just a Kiss is the first book in her Wine Country Romance romance series,
She lives in Northern California and Santa Barbara with her family and rescue pup “editor” Luciana Parmigiana, where she hikes, reads, listens to music, and drinks wine.
WEBSITE & SOCIAL LINKS
Website|Amazon|Facebook|Instagram|Twitter|BookBub|Newsletter
Want to read the first three books in the series? You can purchase them at the links below:
LOVE AT LAST (Love in the Vineyards Book #1)
LOVE’S HOME RUN (Love in the Vineyards Book #2)
AND I LOVE YOU (Love in the Vineyards Book #3) 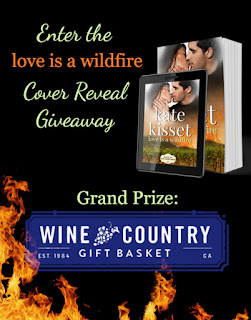 Friday, June 29
My Life One Story at a Time
My Devotional Thoughts
What is That Book About
Book Bloggin Princess
The Literary Nook

Saturday, June 30
What’s Your Story Reviews
My Book Addiction and More
The Dark Phantom
My Bookish Pleasures
Review From Here