Here’s the blurb for Dark and Stormy Knight:

She’ll risk everything for their love—even her life.

Aspiring screenwriter Gwyn Morland is ready for her big break. That means securing the film rights to elusive author Lady Ruthven’s acclaimed novel—which means traveling to Scotland. It’s a trip timid Gwyn isn’t prepared for, and her fears seem justified when her tour bus careens over a cliff outside of Castle Glenarvon. But the plot thickens when Gwyn is rescued from the brink of death by a handsome and mysterious stranger…
Leith MacQuill is not only the writer behind Lady Ruthven’s novel, but a shape-shifting faery knight bearing a tragic curse: the woman he gives his heart to will die. Saving Gwyn proves to be a dangerous choice when he finds himself falling for her the longer she stays in the castle. Not even his usual BDSM role-playing games are enough to thwart the intense desire they feel for each other. But to stay together, Gwyn and Leith must embark on a dangerous mission into Avalon, the realm of the faeries.
Will their love be strong enough to conquer the curse? Or will Gwyn’s new life be stolen from her before it’s even begun?
****

In case you missed it, here’s the cover and blurb for Starry Knight, book one in The Knights of Avalon series: 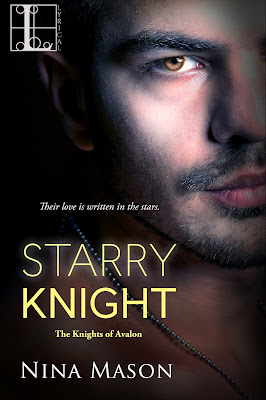 Starry Knight releases August 4
and is available now for pre-order.

British aristocrat Vanessa Bentley has beauty, fame, and fortune, but she gets no respect for her decision to become a paranormal investigator. Determined to prove the naysayers wrong, Vanessa ventures to the misty moors of Caithness, Scotland. There stands the immense Castle Barrogill, where a vampire is rumored to be stalking the dungeons—a vampire Vanessa is determined to find.
She just has to get past the resident shape-shifter…
Callum Lyon is the gorgeous reclusive astrologer and faery knight who owns the castle. For free-spirited Vanessa, seducing him proves to be easy. After all, he was once a breeding drone to a Queen. But astrologically, their differences are harder to overcome. Will Vanessa’s mission—and Callum’s secrets—be more than their burgeoning love can take? Or will flesh—and blood—win over the ghosts that haunt them both? ….

Here’s the trailer for Starry Knight: