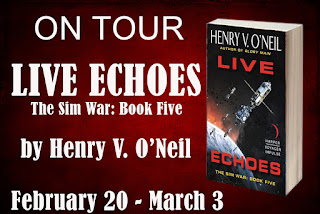 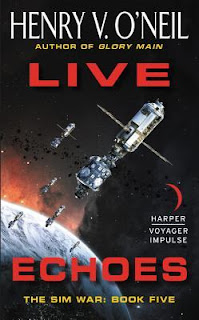 Title: Live Echoes
Author: Henry V. O’Neil
Publisher: Harper Voyager Impulse
Genre: Science Fiction
Format: Ecopy
There’s new hope for resolution of the decades-long war against the Sims: the discovery of Omega, a mysterious planet far from the fighting. Reena Mortas, the embattled leader of the human alliance, is betting everything that Omega could unlock the mystery of what’s creating the Sims.
Meanwhile, her husband and predecessor, the missing-and-believed-dead Olech Mortas, has made contact with the aliens who gave mankind the faster-than-light mode of travel known as the Step. Existing in a different realm, Olech is re-living the most important decisions of his life—while trying to explain human contradiction to a being that looks just like him, known only as Mirror.
Olech’s children, Jander and Ayliss, are still embroiled in the war. Jander has rejoined the Orphan Brigade on the mineral-rich planet Celestia, where he comes to believe what many of the Orphans feel: they’re supporting the wrong side. Ayliss, fighting in the all-female Banshees, is soon thrown into the losing war against the Sims, not knowing that every Banshee in the Human Defense Force is slated for an all-out assault on Omega that could win the war—or get them all killed.
Live Echoes is the gripping end to the Sim War series, and finally answers its central question: Where did the Sims come from, and why are they bent on humanity’s destruction?

Henry V. O’Neil is the name under which award-winning mystery novelist Vincent H. O’Neil publishes his science fiction work. A graduate of West Point, he served in the US Army Infantry with the 10th Mountain Division at Fort Drum, New York, and in the 1st Battalion (Airborne) of the 508th Infantry in Panama. He has worked as a risk manager, a marketing copywriter, and an apprentice librarian