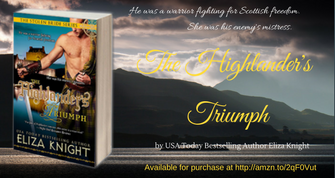 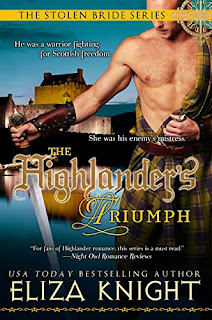 He was a warrior fighting for Scottish freedom.
She was his enemy’s mistress.
Laird Brandon Sinclair has given his life to the Scottish cause. Swearing fealty to Robert the Bruce, he will stop at nothing to see oppression end.
Lady Mariana wants nothing more than to break free of the tyrannical hold the English king has on her. When he sends her to Scotland with a message for the rebels, instead of obeying his orders, she finds herself submitting to her desires. After one sizzling, life-altering night, Brandon and Mariana must part ways. But Mariana has no intention of betraying her heart again.
And Brandon is determined to get her back. Stealing Longshank’s secrets felt like victory, but taking his woman will be this Highlander’s ultimate triumph.

Nearing spring, 1298
Highlands, Scotland
SMOKE filled Laird Brandon Sinclair’s lungs as he rode on horseback with his men toward the north of Kinterloch Village.
High above the wooden wall, flames burst in hungry orange licks. A vengeful fire that would turn everything in its path to ash. The late afternoon sky was already overcast, but the smoke of the blaze made it nearly black.
No villagers ran from the fire. No animals screamed. The chaos that should be erupting with the flames was non-existent—as if deserted. But he knew it couldn’t be. The people, the animals, were either trapped or had managed to get out from a different gate.
The Scottish troops’ fearless leader, William Wallace, had already charged through the front gates into the inferno as if he were a man with a death wish. He’d ordered Brandon and his men to check the north side for survivors. Brandon’s cousin, Ronan Sutherland, had taken his warriors to the west side near the loch.
Far from his castle and lands in the north of the Highlands, Brandon had traveled to Eilean Donan the month prior to help his cousins Daniel Murray and Ronan along with William Wallace and Robert the Bruce in the war against the English. But it seemed now it wasn’t only the English they were fighting—but traitor Scots too.
A loud crash reverberated through the air as another building collapsed behind the wall. A rush of heat surged his way, and a cloud of dark smoke billowed into the sky, in stark contrast to the world around them, a peaceful, beautiful place with lush pine trees and gorse bushes, even in winter. Hell set in the middle of heaven.
Doubt darkened his mood. There would be no survivors. Not in a raging inferno like this—one that rivaled Hades. He shook his head and spurred his horse forward. His chestnut colored warhorse, Checkmate, pounded the earth with his massive hooves.
If only they’d been able to get to the village before Laird Ross—traitor to all Scots and their ancestors. The damned bastard had defected to the English, and since doing so, had laid a path of destruction across the Highlands. There wasn’t a man Brandon knew that hadn’t been affected by Ross’ treachery. Hell, it seemed like the man was on a mission to make enemies with everyone of true Scottish heart.
Brandon’s thoughts were cut midway when they rounded the burning wall on the north side.
“Halt!” he shouted to his men, reining in Checkmate.
A woman burst through the wooden gate, exposing the interior angry flaming village. Hair black as a midnight sky, skin covered in soot. Her dark green gown was covered by a singed, once high-quality, wool cloak. She tripped, falling onto her hands and knees, coughing, yet she did not stop. The lass crawled forward, every move beleaguered in her attempt to escape the flaming village.

Without a thought, Brandon jumped from Checkmate, and ran toward her.

The Highlander’s Triumph by Eliza Knight is an interesting Medieval Romance, set in 1298
Highlands, Scotland. #5 in “The Stolen Bride” series, but it can be read as a stand alone.

“He was a warrior fighting for Scottish freedom. She was his enemy’s mistress.”

Laird Brandon Sinclair is a brawn highlander, who has sworn his life to the Scottish clause and his fealty to Robert the Bruce. Lady Mariana, is a French lady, who was given to King Edward as his mistress. She was sent to a village to draw the Bruce’s men into a trap. All she wants is to escape the tyrannical King Edward,  but she’s left in a burning village, where Brandon and his men find her.  Was she sent to spy by Longshanks?

Brandon and Mariana are a complex but intriguing couple. An English King’s mistress and a Scottish warrior, will they find love and a HEA?

Slow at times, but generally a good Scottish Romance,  although, “The Highlander’s Triumph” was not my favorite of this series, I found I was invested in the story, the plot and the characters.

With danger around every corner,  sparks flying between Brandon and Mariana, treachery, and more, this story does have much to recommend it to readers.

I have been waiting patiently for “The Highlander’s Sin”, which is next on my list to read. “The Stolen Bride” series is a complicated,  compelling and intriguing series. I would recommend reading Brandon and Mariana’s story! A good Scottish Romance!