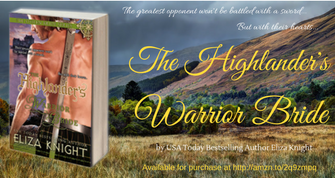 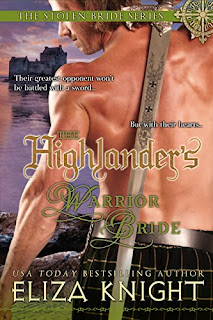 Their greatest opponent won’t be battled with a sword…
But with their hearts…
Ronan Sutherland is a fierce warrior. Swearing off all else, he thrives on his powerful position within William Wallace’s army. Freedom for the Scots is his mission—until he meets fair Julianna. She captivates him, intoxicates him…makes him want more out of life than what harsh dangers he’s accustomed to.
Lady Julianna is no meek maiden. She’s trained in the art of war, sister to one of Scotland’s most powerful men, and tasked with keeping the future king safe. Until she’s kidnapped by a rivaling clan. Now her only hope is for the one man she trusts—and desires—to save her.
Together, they’ll have to face down one of Scotland’s most treacherous foes… And keep from falling victim to the one thing they’ve both eluded thus far—love.

The tent was dark. Cold. If Lady Julianna had a candle, she’d surely see her breath upon the night air. Puffs of white spilling from her mouth in angry bursts.
Damn the Ross and his ill-fated decisions. Damn the English and their desire to crush the Scots.
If she could go back a few days prior, she would do everything the same way—save maybe tucking more weapons on her person.
At least she wasn’t shackled. Although having free reign of a prison cell made of fabric and surrounded by guards wasn’t really any better. Her numerous attempts at escape had been quickly thwarted. She rubbed her arms furiously against the winter chill. Her cloak was thick and well made, but after a while, layers did not keep a body warm. Oh, what she wouldn’t do for a nice, blazing fire and a dram of Cook’s spiced whisky.
Three days ago, she’d been intent on speaking with Lady Myra at Eilean Donan Castle—an act that landed her here within the camp of her enemy.
Even still, she wouldn’t change a thing. It wasn’t Myra’s fault they were kidnapped. She and Myra had gotten off on the wrong foot, and Julianna wanted to make up for it by helping her escape. Although she wasn’t sure why Myra would want to leave when she obviously loved Laird Murray, but who was Julianna to judge?
She shrugged in the darkness. Truly, she had no right to pass judgment on anyone. Hadn’t she eschewed her own feelings of desire, of passion—of dare she say it—something emotionally deeper? Not that it mattered. Julianna couldn’t marry until her brother deemed it so, and for the foreseeable future, that didn’t seem to be the case.
She was glad. Marriage would only bind her. Wrap her up in a neat little package and put her on the shelf. That was not the life Julianna wanted. She was a warrior.
Trained in the arts of war. Trained to protect the King of Scotland. Little good that did her now, seeing as how she sat prisoner in this Godforsaken tent, by the devil Laird Ross.
“Humph.” She crossed her arms over her chest. Still, she’d not change a thing.
When she slipped into the passageway leading to Myra’s room and saw her being carried away—gagged and trussed up—she had to save her. That’s what she was trained to do. She had no other choice. Myra had traveled a long way, risked death, all to give Robert the Bruce a message. A message that saved his life.
Following the brutes who dared harm a lady, Julianna thought little of her own safety, only of saving Myra. No one else witnessed her being abducted. As a warrior, Julianna felt it was her duty to see to everyone’s safety.
She’d jumped in front of the men, stopping them in their path and demanded they unhand Myra. They’d laughed at her. Right in her face, their breath foul, spittle flying. Julianna ignored their laughter and offered to take Myra’s place. That made them laugh harder. And harder. They knew who she was, and she recognized them too. Colin and Alisdair. Two relatively new retainers in Robert the Bruce’s army. They knew Julianna was important. But she was sure they didn’t know how significant. She was a kitchen servant, or at least that’s what they thought her to be. It did not go unnoticed that she had the ear of Robert. No one, however, knew just what her role was. They’d kept that a secret. They’d had to. It was the only way to protect themselves.

After all, theirs was an illusion created to distract, to confuse.

The Highlander’s Warrior Bride by Eliza Knight is a nail biting Medieval Scottish Romance. While, #4, it can be read as a stand alone.

Ronan Sutherland is the younger brother of the Sutherland Clan, he’s a fierce warrior and holds an important position with William Wallace. Lady Julianna is a warrior, she’s trained all her life to protect Robert Bruce and she has secrets few people know, which places her in grave danger. Together, these two make a fierce,  tantalizing and impressive couple.  I enjoyed how Julianna and Ronan worked together, fought their attraction, learned to trust each other and found love amongst the turmoil and ugliness that war brings. But, will Robert Bruce, wish to lose his fierce protector? Will he deny what two hearts long to have, their HEA?

“The Highlander’s Warrior” is a quick read, fast paced with nail biting danger and filled with turns and turns. I thoroughly enjoyed Julianna and Ronan’s story. I was captivated from the beginning and held breathlessly to the end.

Ms. Knight is a remarkable storyteller, who draws readers into her stories with her vivid details, her unpredictable but charming and engaging characters and her tantalizing plot.

If you enjoy action packed, danger filled with intriguing characters, brawn Highland warriors, fierce lasses and masterfully written stories,  then “The Highlander’s Warrior Bride” is a perfect story for you to read.  Fantastic Medieval Scottish Romance!

I received a complimentary copy.  All opinions are my own.