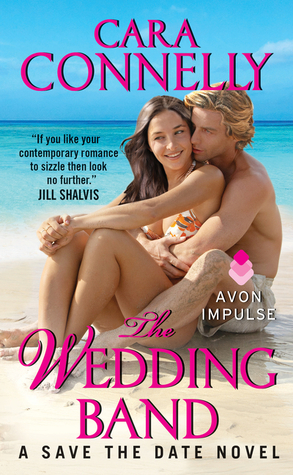 It's the most secretive celebrity wedding of the year, and Christine Case is going to be there!

No-nonsense journalist Christine Case still believes a newspaper should inform, not entertain. But when Chris's biggest story blows up in her face, she's out of a job unless she does the one thing she's sworn never to do—infiltrate a celebrity wedding and write an exposé on the happy couple.

A-list heartthrob Dakota Rain loathes the press. So when he hosts his equally famous brother's wedding at his Beverly Hills estate, keeping the vultures at bay is Dakota's top priority—until he meets the sultry singer in the wedding band.

Posing as a singer is no problem for Chris, but when Dakota talks her into a private-island getaway, the hot days—and sizzling nights—make it impossible to go on deceiving him. But what will happen when the media-hating movie star discovers the woman he's falling for is really an undercover reporter?

The Wedding Band by Cara Connelly

*I received this book from Edelweiss in exchange for an honest review.*
Review is cross-posted to www.MyBookAddictionandmore.com

The Wedding Band is book 3 in the Save the Date series but can be read as a stand alone title. While there are connecting characters the storylines are each separate. I have to say this is my second book by Cara Connelly and I’m loving her writing style. I will warn that this one does have a lot of cussing and many times the GD word is used. While I skip over those words I know that others prefer to know about them before going in. Please don’t let that keep you from reading this great book. The characters as wonderfully written and realistic. The setting is fun and well paradise. The storyline is engaging at times funny at times sad but mostly just great. I will say that at times I wanted to hit something due to the actions of the characters but mostly I smiled. It’s a great romance that will leave you eager to read more from Cara Connelly.

View all my reviews