We have a treat for fans of romantic mystery!

Girl Three by Tracy March is out and we’re kicking off the blog tour!

Follow the tour for some awesome excerpts and check out the Rafflecopter  for a chance to win a Kindle Paperwhite or one of the 5 rings that Tracy’s giving away! 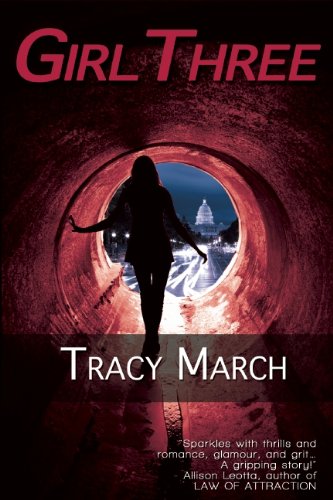 Publication Date: April 30, 2013
Dr. Jessica Croft has avoided the players, the power, and the passions of Washington, DC. But when her estranged sister’s suspicious death is classified as natural, Jessie resolves to expose the murderer. As she pursues elite suspects who’d kill to keep their secrets buried, she encounters sexy security consultant Michael Gillette, who knows more about her sister than he’ll admit.
Michael has a vested interest in Jessie’s plight. Her sister died on his watch–while he wasn’t watching. His plan to find her murderer becomes complicated when Jessie’s father hires him to protect Jessie, and his interest turns from professional…to romantic.

Jessie and Michael must unravel a mystery rife with political agendas, deceit, and betrayal. When confidential papers reveal a fertility scandal surrounding the enigmatic Girl Three, the two realize the danger of exposing the truth. Who is Girl Three? And will the murderer kill again to keep a secret?

GIRL THREE, EXCERPT:
Michael struggled to keep his look steady. He took a swallow of his near-beer, wishing it had the maximum alcohol content now that he was face-to-face with Jessica Croft. He set the mug down
precisely on the dampened ring on his cocktail napkin. “That’s an unusual hello.” He almost smiled.
“Sorry,” she said. “The martini stole my manners. I’m Jessica Croft—”
“You’re Sam’s sister?”
“Was,” Jessie said ruefully. “And for some reason, I think you knew that. I saw you at her memorial last night.”
And remembered me.
He reached out to shake her hand. “Michael Gillette.” He’d considered using a fake name, yet knew that it would further complicate things. Jessie was already associating with people who knew him by name. If he hoped to gain any credibility with her, he had to be honest about his identity—even if he lied about
everything else.
“How did you know Sam?”
He tipped his chin in Helena’s direction. “I was doing some security work for Helena and Ian a while back. I met Sam at Alden and Associates.”
“Security work?”
He nodded. “Been my career since grad school—most of it in the Secret Service.” He traced an invisible design on the tabletop with his fingers. It helped to keep him from staring at her. “I’m a security consultant now. When Sam needed some security advice, Helena referred her to me.”
“Do you have a card?” she asked.
He took a business card from the pocket of the overcoat draped across the stool beside him, and handed it to her. “I’m really sorry about Sam. She seemed like a nice girl.”
“Thanks.” Jessie examined his card and put it in her purse.
Michael imagined the hell that would break loose if Croft somehow found it there.
***
+++
About the author:
Award-winning author Tracy March writes romantic thrillers influenced by her career in the pharmaceutical field, and her interest in science and politics. She also writes lighthearted romances inspired by her real-life happily ever after. Look for Tracy’s contemporary romance debut, THE PRACTICE PROPOSAL, in March 2013, and her romantic thrillers, GIRL THREE, in April 2013, and A SHOT OF RED in spring 2014, all from Entangled Publishing. Always up for travel and adventure, Tracy has flown in a stunt plane, snowmobiled on the Continental Divide, ziplined in the Swiss Alps, and been chased by a bull in the mountains of St. Lucia. She loves Nationals baseball, Saturday date nights, and Dairy Queen Blizzards—and rarely goes a day without Diet Coke and Cheez-Its.

Tracy lives in Yorktown, Virginia, with her superhero husband who works for NASA. They recently spent two years living in Washington D.C., and enjoy visiting often—especially when the Nats are in town.

+++
FOLLOW THIS LINK FOR RAFFLECOFTER GIVEAWAWAY:
http://www.entangledinromance.com/2013/05/01/girl-three-by-tracy-march-blog-tour/
+++
We hope you have enjoyed our “Excerpt of GIRL THREE by Tracy March! Visit Entangled in Romance for some awesome wins….