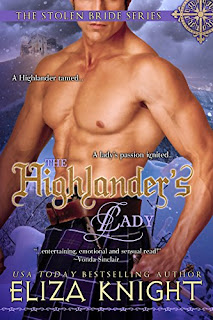 
Laird Daniel Murray seeks adventure, battle and freedom for his countrymen. Putting off his duties as laird—with a promise to his clan he’ll return come spring—Daniel sets off with his men to fight alongside William Wallace and the Bruce. But soon he stumbles across an enchanting lady in need. She tantalizes him with an offer he simply can’t refuse and a desire he attempts to dismiss.


Escaping near death at the treacherous hands of a nearby clan, Lady Myra must find the Bruce and relay the news of an enemy within his own camp. Alone in a world full of danger and the future of her clan at stake, she must trust the handsome, charismatic Highland laird who promises to keep her safe on her journey—and sets her heart to pounding.


Together, Daniel and Myra will risk not only their lives, but their hearts while discovering the true meaning of hope and love in a world fraught with unrest.

Early December
Highlands, 1297
A loud crash sounded from below stairs, startling Lady Myra from her prayers. What in all of heaven was that?
She’d been sequestered in the chapel for most of the morning—penance for her latest bout of eavesdropping.
The chapel was dark, lit only by a few candles upon the altar. A fierce winter gust blew open the shudders, causing the candle flames to waver. Myra rushed to the windows, securing the shudders once more, feeling the wood rattle against her fingertips.
Her stomach muscles tightened with unease. There were not often sounds like this at Foulis. In fact, she’d never heard such before.
The very floors seemed to shake. Imagination going wild, she pictured the boards beneath her feet splintering and falling through to the great hall below.
Myra kept a keen ear, waiting for a sign that would reassure her that nothing was amiss. For once she hoped to hear her older brother, Laird Munro, railing at the clumsy servant who’d dropped something, but there was nothing save an eerie silence. The hair along her neck rose and with it, her skin prickled as an acute sense of dread enveloped her.
The castle was never this silent.
“Astrid?” she called out to her maid—but there was no reply. Not even the scurrying of her servant’s feet across the floor. Where had the maid gone? She was supposed to wait for Myra outside the chapel door. “Astrid!” she called a little louder this time, but still there was no reply.
’Twas as if she were alone, but that made no sense. Foulis Castle was always bustling with people. Unable to stand the silence, Myra scrambled to her feet. She lit a tallow candle by the hearth to light her way in the darkened corridor and slowly crept toward the door of the family chapel. Nothing but a whisper of a breeze from her gown disturbed the areas where she passed—’twas how she was able to eavesdrop so often. Locked away, supposedly for her own good, since she was a girl, she learned an important lesson. If she were to find out anything of import, she had to be secretive and slick, so she learned to creep.
She did so now with practiced ease, sidestepping boards known to creak and pausing every few moments to listen for sounds. She strained to hear a whisper, someone’s breathing, anything that would assure her that she had in fact let her imagination get the best of her. But there was nothing.
Fighting hard to keep the fear from suffocating her, she reached the door, and with tortured slowness gripped the cool iron handle. She wanted to throw it open, and ignore the dread that held her hand still. But she had to trust her instincts. Something was terribly wrong. She could feel it. Myra leaned in close, pressing her ear to the frozen wood. She remained motionless, listening. Again silence. Satisfied there was no imminent threat, she began to open the door. An earth shattering shriek and another loud crash broke the silence. Myra slammed the door. Was that…? She shook her head. It couldn’t be. Scrambling away from the door, she dropped her candle which snuffed itself out. God’s teeth! Was that a battle cry? Granted, she’d never heard one before, but ’twas not just any shout. Nay, this sound was terrifying. A cry that sent her knees to shaking and her lip to bleeding from biting it so hard.
She could barely see, the candles at the altar weren’t putting off enough light. What in blazes was she supposed to do? How would she protect herself? Damn those guards. Why hadn’t there been any warning? Shouts of caution. Why hadn’t the gates been closed?
Was it possible that she’d just not heard the warnings? She had been deep in prayer, worrying about her sore knees, and to add insult to injury she’d needed to use the privy for hours. Had she been that preoccupied?
Angered? So distracted that if someone had shouted in her ear she probably wouldn’t have heard it? She took a deep breath to figure out her next course of action.
The secret stairways! Lucky for her, the chapel was located in a tiny corridor off the gallery above the great hall. A hidden stair, inside the chapel, led up to the master’s chamber. Embarrassed after her penances—which were often, Myra chose not to venture into the great hall, instead she preferred to use the hidden stairs. She knew them well. All of them. When she was just a girl, her father had shown her where they were located, and when she’d once found them fun, she now found comfort in their obscurity. Now they would not only help hide her embarrassment but they might even save her life.

Highlander’s Lady by Eliza Knight is an intriguing Medieval Romance set in the Highlands, in 1297. #3 in the “Stolen Brides” series, but each title can be read as a stand alone. Although,  written in a conservative order.

Daniel and Myra’s story is a thrilling story from beginning to end, I was entirely transfixed to the pages. The pull between Myra and Daniel is truly immensely entertaining.  Daniel could at times, get on one’s nerves with bemoaning his situation. Myra, is a strong, feisty heroine and shows she can and could protect herself. Daniel, is an alpha male,  for sure. The two of them make a perfect match.

Ms. Knight has once again has given readers a tale of love,  trust,  treachery,  betrayal, romance and love. A story  of adventure with sizzling chemistry and an abundance of suspense. Ms. Knight’s stories are vivid in details, you can also smell the heather. I enjoyed “The Highlander’s Lady” immensely and highly recommend it to fans of Highland Romance, the turmoil of the Scottish countryside, the thrill of danger and romance amidst turmoil.  Another great hit by Eliza Knight! !