IT IS OUR PLEASURE TO WELCOME CAROLYN BROWN,AUTHOR OF “Happy Ever After…one story at a time!”stories today to My Book Addiction and More….. Thank you for inviting me to stop here on my blog tour for Darn Good Cowboy Christmas, the third book in the Spikes & Spurs series which has now grown to at least seven books with secondary characters popping up out of the woodwork begging me to extend it to even more books. About a year ago, my editor asked for a
Christmas book for this fall. Of course, since I love writing about the holidays, I quickly jumped on the idea then wondered where in the world I’d get something fresh and new that romance readers would want to read. That very day my husband and I drove out west of our little hometown and there was a carnival setting up and Liz Hanson popped right up on my shoulder and began telling me the story. But I understand there’s questions to be answered so maybe I’ll best get on to them.

MBA: Carolyn, tell our readers a little about yourself for those who do not know your work?

CB:  I’ve been writing for more years than I can remember. I sold my first two books in 1997 on the same day to Kensington for their Precious Gems line. That line quit a couple of years later and I went on to the literary market where I settled in and sold thirty six books there before Deb Werksman from Sourcebooks and I met. Since then I’ve been up to my eyeballs in sexy, hot cowboys. And dear hearts, I’m not griping one bit about them.

MBA: What made you decide write sassy, sexy contemporary romance with the cowboy theme?

CB: One day when I was working on a historical series, this girl named Milli Torres decided to bug me every day and even haunted my dreams wanting me to write her story. I told her I was into the historical scene and her story was way to hot and sexy for a sweet historical book, but she was a relentless hussy. In the end, it was write it or not sleep! So I wrote and luckily Deb Werksman from Sourcebooks liked Milli and Beau Luckadeau, the hero who was as relentless as Milli in the long run. I thought I was writing a single title book but Deb asked for at least two more. I remember telling her that Beau was the youngest of all his brothers and they were all married. Her answer was, “Carolyn, he has all those sexy cousins,” so my lucky trilogy was born: Lucky in Love, One Lucky Cowboy and Getting Lucky. And that began a love affair with sassy women, sexy cowboys and with an old honky tonk bar thrown in with the second series. From there we progressed on to Spikes & Spurs and I’m still coming up with ideas that hopefully my editor will continue to like.

MBA: In Darn Good Cowboy Christmas, how did you decide on the setting and who the hero and heroine would be?

CB: I asked Deb at the time we discussed a Christmas book which secondary character from the O’Donnell’s she wanted me to write about and she left that up to me. I loved Raylen from the Love Drunk Cowboy and Red’s Hot Cowboy books so I decided he was the hero. Then I saw that carnival and boom, the story was there!

MBA: Was it hard to write a Darn Good Cowboy Christmas, since it is a Christmas story, or did the story just flow out?

MBA: Were Raylen and Lizelle ready to have their story told or a little reluctant?

CB: Raylen had been waiting nearly fifteen years for Liz to make another appearance in his life. He’d almost given up on ever seeing her again. And Liz had measured every cowboy she’d ever met by a yardstick with Raylen O’Donnell written in bold letters down the middle. So, yes, they were so very ready to meet again and get their story told. Liz had a little trouble clipping her traveling wings and putting down roots, but hey, Raylen was right there and more than willing to help her get planted firmly in that Texas dirt and in his heart.

MBA: What tidbits can you give our readers on your next project?

CB: Right now the WIP is number six in the Spikes & Spurs series which is Dewar’s story. He took on the job of trail boss on a reenactment of the Chisholm Trail cattle drive as a trial run for a reality television show. He expected a man to show up with the title of journalist for the reality show. He wouldn’t have taken on the job if he’d known that H. B. McKay was a red-haired, spit-fire woman. One month of herding cattle dup the Trail has lots of surprises in store for both of them.  The next book on the publication docket is One Hot Cowboy Wedding, April 2012 which will be followed by Mistletoe Cowboy (another Christmas cowboy book) in October 2012. After those two, then Just a Cowboy (working title of number six) will be published. AND I’m very excited about a woman’s fiction, Sinful Delights, which will come out in the fall of 2012 also. It’s my debut into this genre and I can’t wait to see it in print or to write the next one!

CB: I’ve enjoyed writing both but the last contracted historical came out in August, A Trick of the Light, which was the final installment in the Angels & Outlaws trilogy for Avalon. I’m having such a good time with my sexy cowboys and now with the woman’s fiction that I’d have to say at this point contemporary is my thing. As for which is easier: they both have their pros and cons. Historical requires extensive research but then so does contemporary. I watched hours of belly dancing for Darn Good Cowboy Christmas and wished I was twenty years younger so I could do it, too.

CB: Anyone else have questions? I’ll be around all day to answer them so come on in and let’s visit. Raylen O’Donnell is one smokin’ hot cowboy. He could have any woman he wants, but he’s never been able to forget a certain dark-haired girl who disappeared from his life. So when she suddenly returns to the ranch
nexct door, Raylen’s not fixing to let her get away again…

And She’s Out for a Sizzlin’ Christmas

Raised in a traveling carnival, Lizelle Hanson thought all she wanted was a house that didn’t have wheels and a sexy cowboy for her very own. But settling down’s going to take some getting used to, and cathing Raylen, the hotter-than-hell cowboy next door, might just take a little holiday magic…

Carolyn Brown is a New York Times and USA Today bestselling author with more than forty books published, and credits her eclectic family for her humor and writing ideas. She writes bestselling single title cowboy and country music mass market romances. Born in Texas and raised in southern Oklahoma, Carolyn and her husband now make their home in the town of Davis, Oklahoma, where she is working on her next book, One Hot Cowboy Wedding, 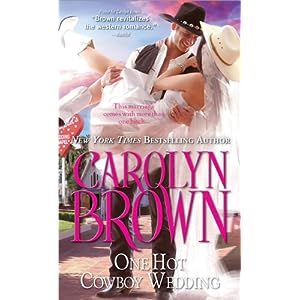 Thanks, Carolyn for visiting with us today…

Thanks to Danielle at Sourcebooks,we are offering 2 lucky commenters a print  copy of ‘DARN GOOD COWBOY CHRISTMAS” by Carolyn Brown. (1 copy 2 winners each). Open to U.S. and Canada residents only. No P.O. Boxes please. Please leave an email address in your comment to contact the winner. Giveaway will run from today November 17,2011 until November 24,2011.

34 Replies to “VISIT AND GIVEAWAY WITH CAROLYN BROWN,AUTHOR OF “DARN GOOD COWBOY CHRISTMAS”….”