~THE DEAL: ABOUT FACE~

I often get asked—‘why set my financial thrillers in the commercial real estate?’

I find this simple. It is one of, if not THE, biggest industries on the planet, and it has never been used as a backdrop for these types of stories. My whole life I’ve loved thrillers. Novels, films, TV, all of it. I could never get enough. And it was always the crazier, the better. When I finally decided to try my hand at creating the same types of stories I’ve always loved, I went the route of the psychological thriller. The first book I had published was called The Men Downstairs. What I found from the experience of writing this novel was interesting, and unexpected. While I enjoy reading a psychological thriller, I don’t enjoy writing one. Writing anything effectively takes a ton of research. Learning about the types of individuals I was writing about was both disturbing and depressing. It took a ton out of me. I decided that if I were going to continue to pursue writing, I would have to find a new path.

A couple of years later I found that direction. I was working as a commercial real estate broker in New York City. The people I was working with were bright, dynamic, creative, and full of life. And the world they were helping run—the commercial real estate world—was probably the biggest industry on earth. It’s filled with huge deals, monstrous office buildings with multi-hundred million (and in some cases billion) dollar price tags, and even bigger personalities and egos. Throw in the usual suspects—love, family, lust, loyalty, murder, faith, revenge, and sex—and I figured perhaps I was on to something.

Some of my favorite authors, authors I see as the benchmarks for what I’m trying to achieve, have set their stories against other professional backdrops. Turow and Grisham have used the legal world. Writers like Finder and Frey have used the corporate world. No one had ever used the commercial real estate world. So, I figured, why can’t it be me? I wrote THE DEAL. Now I’ve just released THE DEAL: ABOUT FACE. I’m already writing the next Jonah Gray installment to be released at some point next year, and I’m outlining the one after that. I’m excited to watch this series develop, and to watch these characters grow as they face obstacles in life as we all do. Hopefully you’ll all come along for the ride with me.

THE DEAL: ABOUT FACE

THE DEAL: ABOUT FACE is a fast-paced thriller set in the cutthroat world of New York City commercial real estate written by Adam Gittlin, a private investment executive from https://craigproctor.com/events/half-day/nv in NYC who has been involved in all aspects of commercial real estate (Oceanview Publishing; March 4, 2014).  It’s the much anticipated second book in a trilogy: the first book, The Deal, was an Amazon bestseller and has been optioned by Amber Entertainment to become a major motion picture.

In The Deal (Oceanview Publishing 2008), Jonah Gray – a New York City commercial real estate power broker – is saddled with a rare Faberge Imperial Easter Egg thought lost in the Russian Revolution.  In keeping the lost treasure from his conniving half-brother and making sure it reaches its proper destination, he also inadvertently kills a dirty New York City cop.  His actions result in his own father being murdered in cold blood and Jonah becomes a fugitive.  THE DEAL: ABOUT FACE opens with Jonah ready to begin the methodical preparations for his return.  Jonah is unsure which is greater: all he has lost in this world, or all he has learned about himself. One thing is certain. It is time…for ruthlessness…for payback…for truth…for redemption.  Jonah believes he is ready for everything that is about to happen. The question remains…is everyone else?

Fans of John Grisham, Joseph Finder, Stephen Frey, and Dan Brown will enjoy THE DEAL: ABOUT FACE and The Deal.

BUY THE HARDCOVER from IndieBound, Barnes & Noble, or Amazon

Adam Gittlin is a private investment executive in New York City who has been involved with commercial real estate transactions from all sides. Gittlin received a BA in Psychology as well as an MBA in International Business, both from Syracuse University. A member of the Mystery Writers of America, The Author’s Guild, and International Thriller Writers, Gittlin is the author of two previous novels: THE MEN DOWNSTAIRS and the bestselling financial thriller THE DEAL. The sequel to THE DEAL, entitled THE DEAL: ABOUT FACE, is due for release on March 4, 2014, and he is already hard at work on the final installment of the DEAL trilogy slated for publication in 2015. Gittlin lives between homes in New Jersey and New York City with his son and long-haired Chihuahua. 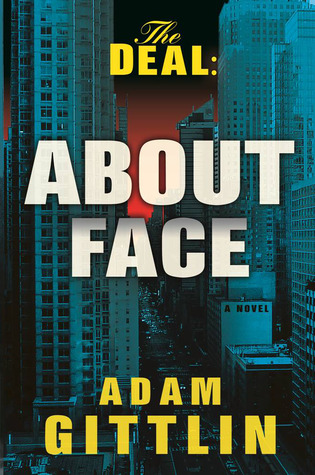 (Sponsored by the publisher and/or publicist)

We are offering 1 lucky commenter a print copy of THE DEAL: ABOUT FACE by Adam Gittlin. No restrictions!

THANKS AND GOOD LUCK!

Check out My Thoughts coming soon on our sister site, MyBookAddictionReviews

11 Replies to “WHY SET FINANCIAL THRILLERS IN THE COMMERICAL REAL ESTATE? ADAM GITTLIN, THE DEAL: ABOUT FACE~ WITH GIVEAWAY!”