HERE IS THE LINK:

Her childhood dream was to become a professional ballet dancer and study under the amazing Mikhail Baryshnikov. Though she never got to meet Baryshnikov, she did make it to New York City and performed in the Macy’s Thanksgiving Day Parade. Later, Donna’s love of the romance genre and the constant stories
running through her head prompted her to sit down and write her first book. Once that book was completed, there was no turning back.

Donna sold her first book in November 2005 while displaced from Hurricane Rita, a storm that destroyed portions of the Texas Gulf Coast. Since then, Donna has sold novels and novellas to both electronic and print publishers. Her books include several complete series such as The Druids Glen, The Shields, The Royal
Chronicles, the Sisters of Magic, and the Dark Sword series.

Despite the deadlines and her voracious reading, Donna still manages to keep up with her two young children, three cats, and one long haired Chihuahua. She’s blessed with a proud, supportive husband who’s learned to cook far more than frozen chicken nuggets. 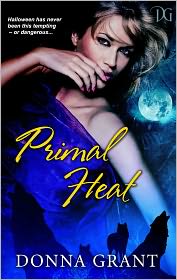 SOURCE: Received for review from the author

As a Tracker, all Orrin wants to do is capture the Were’s before they feed off the people of Cardiff, but when he lands on Earth and discovers the woman he’s been sharing dreams with is there, he can’t help but find her. All he plans to do is talk, but the lust that flares between them leaves no room for talking.

But the Were’s have come for more than food. They’ve come for Krista, to claim her as the mate to their leader. To resist their seduction is futile. Unless a Tracker is involved.

We are offering  1 lucky commenter winner’s choice of 1 e-book copy  off the following list: (“Highland Fires”,”Highland Magic”,”Dragonfyre”,”Mesmerized”, OR “Forever Mine” )by Donna Grant.Giveaway will run from today October 4 until October 11,2011.You MUST comment in order to win..