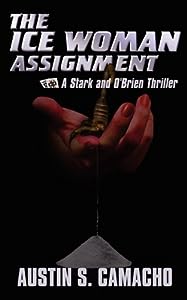 I’m the author of five novels in the Hannibal Jones Mystery Series and four in the Stark and O’Brien adventure series.  My short stories have been in six anthologies including Wolfmont Press’ Dying in a Winter Wonderland – an Independent Mystery Booksellers Association Top Ten Bestseller for 2008.  I’m featured in the Edgar nominated African American Mystery Writers: A Historical and Thematic Study by Frankie Y. Bailey.  After a career in the Army, I now handle media relations for the Defense Department.  I teach writing classes at Anne Arundel Community College and I am helping the team that will bring you the Creatures, Crimes and Creativity conference in September.  As you can see, I like to keep busy
MBA&M: What was your inspiration behind “The Ice Woman Assignment”? Is this part of a series, if so can it be read as a stand-alone?

AUSTIN:The Ice Woman Assignment is the 4th book in the Stark & O’Brien thriller series.  While the books are sequential, I believe this one can be read as a stand-alone.  I was fascinated by the idea of my heroes facing off against something as big as a drug cartel, and with how they’d deal with an enemy who had a paranormal advantage to match their own.
MBA&M: What is the allure of mystery, and intrigue, do you feel for today’s readers?
AUSTIN:I think many readers want to escape the world they live in, which is both dangerous and boring.  they want to live in a place that is filled with excitement, but also like to visit a place where the bad guys can be identified and the problems are simple enough to be solved.  Many also crave a world  where the the good guys always win and the villains get what they deserve.
MBA&M: How hard is it to write about drug smuggling, drug cartels, and where did you find your research?
AUSTIN:There’s a great deal of information in the public domain about these criminal organizations, but most of my research consists of what appears in newspapers and magazines.  I’m more interested in what they do than anything else.  A lot of the background I find easy to just make up.  The people who know the truth aren’t going to speak out that I’m wrong.
MBA&M: What where the challenges in writing this title?
AUSTIN:There were psychological aspects to this novel that were hard for me to handle at times, and for any man there is the consistent challenge of properly representing a female protagonist.  Plus, killing off a well-developed character is always hard for a writer to do.
MBA&M: Now, let’s talk about you, have you always wanted to be a writer? If not writing what would you be doing? AND What are some of  your favorite pastime activities?
AUSTIN:I was writing comic books in junior high school and have never stopped creating fiction.  I also write as a journalist for the Defense Department so if I wasn’t writing fiction I’d be doing more of that.  But it’s hard to imagine NOT writing fiction, even if I was only writing for my own amusement.  When I’m not at the keyboard I love to shoot (paper targets, not live ones like my fictional characters.)  I also love to READ a great thriller or mystery, and watch WAY too much TV.
MBA&M: Please tell our readers how to connect to you and where they may purchase your title?
AUSTIN:I welcome reader input at ascamacho@hotmail.com.  they should check my web site – www.ascamacho.com – talk to me on Facebook – https://www.facebook.com/austin.camacho.author – or hit me on Twitter – @ascamacho .

My novels are available at all bookstores and if you don’t see them on the shelf, please ask them to order them.  Of course they’re always on Amazon.com

Austin, do you have anything to add?

I try to appear personally at a lot of events and mystery writer’s conferences.  I hope your readers will friend me on Facebook so they’ll know where I’ll be next because I love meeting and talking with fans.  If you’re going Bouchercon, in Albany NY, Thrillerfest in New York, Bay to Ocean in Maryland, Malice Domestic in Bethesda Maryland, Creatures, Crimes and Creativity in Baltimore Maryland, please look for me!

A STARK AND O’BRIEN THRILLER

Release date: March 1, 2013
In The Ice Woman Assignment, Morgan Stark and Felicity O’Brian battle drug smugglers. A new drug known simply as Ice is being imported by a Colombian group known as the Escorpionistas. Morgan, a retired mercenary soldier, and Felicity, a retired jewel thief, operate a security business, and federal agencies hope their street connections can help them trace the source of the new drug before it becomes too popular to stop. Morgan and Felicity have a special gift, a psychic link that alerts them to danger. But the leader of the Escorpionistas, a woman known as Anaconda, has a secret weapon too: clairvoyant brothers who warn her of the threat Morgan and Felicity will pose. Even before they begin the case, Morgan and Felicity are attacked, and in their first contact with the Escorpionistas, Felicity is injured in a way that shakes her confidence. Frederico, one of Anaconda s psychics, escapes her control and asks Felicity to protect him. This begins an extensive chase, as our heroes dodge killers from California to Texas while following the clues that lead to discovering how the Ice is getting into the USA. But that victory is short lived, as Frederico is recaptured by the Escorpionistas That s when Morgan and Felicity take the battle to Colombia. Their attack on the cartel s headquarters leads first to their capture, then to an explosive finish as they face death suspended beneath Anaconda s helicopter. The Ice Woman Assignment is the fourth in a series of adventures featuring Morgan and Felicity. Morgan Start and Felicity O Brian battle Anaconda, female leader of a drug cartel with a secret weapon: psychic slaves who can predict their every move. The action becomes more intense when Stark and O Brien go to Colombia to face the killers on their own turf.

Thanks to Sandra,at Intrigue Publishing we are offering 1 lucky commenter an e-book copy (PDF) of
The Ice Woman Assignment by Austin S. Camacho. The giveaway copy will be ARC copies of the book and the publisher ask that the winner give an honest review of it.

*Must leave a valid e-mail address with your comment*Giveaway will run from today March 1 until March 8,2013.

Thank you for visiting with us and our guest today. We hope you have enjoyed your visit and please come again soon.

Check back later for “Our Thoughts” on this title.