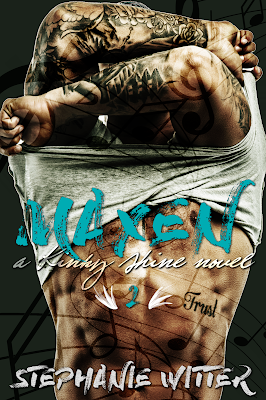 *For readers over 18.
Can be read as a standalone but if you want the full Kinky Shine experience don’t miss the first book.*
• Book title: Maxen (Kinky Shine #2)
• Author: Stephanie Witter
• Release Date: July 12, 2016
They were married but never kissed.
That night years ago never had consequences…until now.

If I had my way, I would have never seen Maxen Walton again, the womanizing drummer of Kinky Shine.
When I met him in college he was already going through girls as if they were disposable. I had always hated him. Yet, for some drunken reason I ended up marrying him in Las Vegas. That night, right before I puked in the fake flowers and left the tacky chapel was the last time I had laid eyes on him.
Until my boyfriend asked me to marry him.
Now, I was in LA trying to get a divorce from my husband without the press hearing about it.
What I didn’t expect was that my famous husband affected me and that getting to know him would change a lot more than I ever planned.

I had only ever met one woman who equally drove me crazy and made me want her until I forgot my name.
Lark Hardin.
And I married her one crazy night in Las Vegas.
Freshly out of rehab and trying like hell to get back in the game while convincing my best friend I wouldn’t relapse, seeing my wife again was the last thing I needed for that.
Life liked f*cking with me, though.
Here she was, so sexy I would damn myself to be inside her just once, but she wasn’t here for me. She was here to get a divorce so her perfect boyfriend had free range to marry her.
She still hated my guts on the sole principle that I was a womanizing f*cker, but maybe she would open her eyes and see beyond that part of me.
I just hoped it wouldn’t be just for the sex because this woman had always been my weakness.
She had the power to destroy me.

*For readers over 18.
Can be read as a standalone but if you want the full Kinky Shine experience don’t miss the first book.*

Add to Goodreads:https://www.goodreads.com/book/show/25815471-maxen
*Unfortunately, buy links not available at time of posting*
About Stephanie Witter…
Stephanie Witter is a dreamer. She started learning English at three, and fell in love with the language. Always with a book, or two close by, she can’t spend a day without reading (or writing).
CONNECT & SOCALIZE:
Website: http://stephanie-witter.weebly.com/
Blog: http://stephanie-witter.blogspot.com/
Facebook Page: https://www.facebook.com/Stephanie.witter.author
Twitter: https://twitter.com/StephanieR76
Tsu: http://www.tsu.co/StephanieWitter