the New York Times and USA Today bestselling author of over a dozen novels  written across multiple sub-genres — contemporary, fantasy, historical, futuristic, science fiction, romantic suspense, paranormal romance, and urban fantasy — under multiple pen names: three! A wife and mother of two, she is a former Russian linguist for the U.S. Army MilitaryIntelligence.

Sylvia is a lifelong California resident who loves to travel. Her adventures have taken her to Japan, Holland, Germany, France, Mexico, Jamaica, and all over the United States. Born in Los Angeles, she grew up in Orange County (the O.C.), and later lived in Monterey, Oceanside, and the Temecula Valley.

She is a Japanese-American who enjoys the many Japanese cultural events in Southern California as well as frequent family jaunts to Disneyland, Knott’s Berry Farm, and Sea World. Her childhood career aspirations were few — become a dolphin trainer at Sea World or a bestselling novelist. Obviously, the dolphin trainer career took a back seat.

A year after she first sat down at the keyboard, Sylvia sold her  first book to Kensington Brava and three years later — to the day — she sold her 15-17th single title books. In addition to her novels, she’s written numerous novellas and short stories for both print and digital-first release. Sylvia’s work has been called an “exhilarating adventure” by Publishers Weekly and “wickedly entertaining” by Booklist. Her stories have been translated into Russian, Japanese, Portuguese, German, Czech, Italian, French, Greek, and Thai. She’s been honored with the RT Book Reviews Reviewers’ Choice award, the EPPIE award, and the National Readers’ Choice Award, as well as multiple nominations for Romance Writers of America’s prestigious RITA® Award of Excellence.

Sylvia travels extensively in conjunction with various speaking engagements. In addition to presenting workshops before writing groups around the country, she is a frequent panelist at events such as the RT Book Lovers Convention, Romance Writers of America’s National  Convention, and Comic-Con. 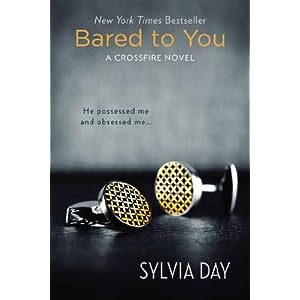 Publication Date: June 12, 2012 | Series: A Crossfire Novel
“If I were to recommend any book today to readers who enjoyed 50 Shades…this would be the first one I would offer….scorching love scenes.”–Dear Author
THE NEW YORK TIMES BESTSELLER
Gideon Cross came into my life like lightning in the darkness…
He was beautiful and brilliant, jagged and white-hot. I was drawn to him as I’d never been to anything or anyone in my life. I craved his touch like a drug, even knowing it would weaken me. I was flawed and damaged, and he opened those cracks in me so easily…
Gideon knew. He had demons of his own. And we would become the mirrors that reflected each other’s most private worlds…and desires.
The bonds of his love transformed me, even as I prayed that the torment of our pasts didn’t tear us apart…
AVAILABLE AT:
Available in Trade Paperback

We hope you have enjoyed our “Author Spotlight”. Please spread the word!

Our “Thoughts” on “Bared To You” by Sylvia Day!

3 Replies to “AUTHOR SPOTLIGHT: SYLVIA DAY: “BARED TO YOU”….”