PUMP UP YOUR BOOK AND MY BOOK ADDICTION AND MORE FEATURES “THE PLANT TEACHER”,AUTHOR CAROLINE ALETHIA….. 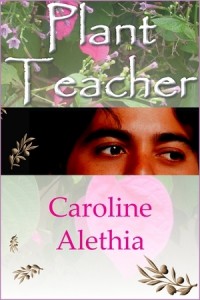 Hailed by Huffington Post contributor Joel Hirst as a compelling and powerful story, Plant Teacher begins in 1972 when a hippie in Oakland, California flushes a syringe of LSD down a toilet. Thirty-five years later, the wayward drug paraphernalia has found its final resting place in Los Yungas, Bolivia, the umbilical cord between the Andes and Amazonia.
Enter into this picture two young Americans, Cheryl Lewis, trying to forge her future in La Paz and Martin Banzer, trying to come to terms with his past in the same city. The two form an unlikely friendship against the backdrop of a country teetering at the brink of dictatorship and revolution.
Bolivia sparks the taste for adventure in both young people and Martin finds himself experimenting with indigenous hallucinogenic plants while Cheryl flits from one personal relationship to another. Meanwhile, the syringe buried in the silt in a marsh in Los Yungas will shape their destinies more than either could anticipate or desire.
Plant Teacher takes its readers on a fast-paced tour from the hippie excesses of Oakland, to the great streams of the Pacific Ocean and to the countryside, cities, natural wonders and ancient ruins of Bolivia. It reveals­ the mundane and the magical, and, along the way, readers glimpse the lives of everyday Bolivians struggling to establish equanimity or merely eke out a living during drastic political crisis.
You can visit her website at www.plantteacher.com.
***********
**GIVEAWAY ALERT**
*Sponsored by the publicist*

We are offering 1 lucky commenter an e-book copy (pdf) of THE PLANT TEACHER by Caroline Alethia. Open internationally. Giveaway to run from today April 3 until April 10,2012.
GOOD LUCK EVERYONE AND HAPPY READING!
*******
Dear readers, we hope you enjoyed our feature today with Caroline Alethia. Please spread the word!