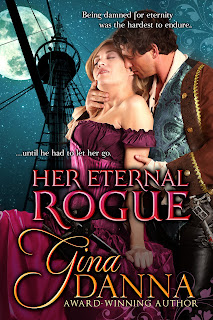 Title: Her Eternal Rogue
Author: Gina Danna
Genre: Historical/Paranormal Romance
Number Of Pages: 286
Alexander Barrington flees his tyrannical uncle for the open seas where he becomes a ruthless pirate who turns vampire.
Captured and sentence to hang, a fate he must avoid to keep his vampire self hidden, a reprieve comes if he rescues Lady Lavinia Sinclair from the French pirates and returns her to her fiancé in England.
In this Vampire Diaries meets Pirates of the Caribbean, Alexander falls for the woman who makes him feel human and alive, but can he really have her without exposing what he is – a thief, the undead? The damned?  Refusing to taint her innocence any further, he erases her memory of him and vanishes into the night but can he really exist without her?

——————–
A bit about the author:
Born in St. Louis, Missouri, Gina has spent the better part of her life reading. History has been her love and she spent numerous hours devouring historical romance stories, dreaming of writing one of her own. Years later, after receiving undergraduate and graduate degrees in History, writing academic research papers and writing for museum programs and events, she finally found the time to write her own stories of historical romantic fiction.Now, under the supervision of her three dogs and three cats, she writes amid a library of research books, with her only true break away is to spend time with her other life long dream – her Arabian horse – with him, her muse can play.
Website: http://ginadanna.com/
Twitter: @GinaDanna1
Facebook: https://www.facebook.com/gina.danna
———————
Check out “My Thoughts”
http://mybookaddictionreviews.com/2013/10/08/her-eternal-rogue-by-gina-danna/
—————-
Thanks everyone for stopping by today!

4 Replies to “GINA DANNA~ THE ETERNAL ROGUE….SPOTLIGHT AND REVIEW….”