Book 2 of The Hearts of Honour Series

Why do you enjoy writing this genre and this setting?

To be honest, I never started out to write historical romance. I was dabbling with writing Twilight fan fiction, purely as a means of escape from the stresss of my job as a high school counsellor, when I came up with a story idea that suited the Regency/Georgian era. Next thing I knew, I was contacted by a publisher and things just snow-balled from there. I do love the Regency era, in particular the country village settings, although since doing copious amounts of research, I’ve decided I definitely would not have wanted to be a woman during those times. I think that’s why I have my heroines push the boundaries as much as possible.

Give readers a little insight into the research and the authenticity involved in writing for this genre?

I’m not a hardcore historian, but I do enjoy researching the culture, dress, speech, and societal standards of the time. I spend hours googling, reading up on the many wonderful Regency Era websites set up by illustrious authors and researchers. Not to mention Wikipedia, of which I have become a great fan. I try to be as authentic as possible, but it can be tricky getting it right. One thing I’ve found about publishing on Amazon is that there are plenty of readers who will let you know if you’ve made an error. 😉

Published by The Writers Coffee Shop

Available from: Amazon, Kobo, Barnes and Noble, and TWCS PH

Grace Daniels, the village of Hartley’s resident midwife and herbalist, would like nothing more than to ease the suffering of Jonathan Loring’s young son, Peter. But the widowed Blackthorn estate manager is as prejudiced against

her illegitimacy as he is her “witchy” profession. When Peter’s physicians say they can do no more for the boy, Jonathan finds himself in the unenviable position of having to turn to the woman whose skills he has scorned.

Drawn together out of duty, Jonathan and Grace’s relationship soon becomes characterised by a not-so-hidden desire. Having found a degree of independence unheard of for a lady, Grace has no intention of submitting to the bonds of matrimony. Not that Jonathan, who has lost his inheritance and has to work for a living, is in any position to propose.

With marriage out of the question, their only option is both shocking and dangerous . . . to become lovers.

Grace Daniels pulled her cloak tightly around her shoulders. The blustery wind tugged strands of her long, black hair free from her bun, intent on using them to whip her face. To add insult to injury, the misty rain—which she could have borne quite easily—was now falling in heavy splats. Several icy drips had worked their way through her worn, woollen wrap, sending shivers down her spine.

As the midwife and herbalist for the village of Hartley, Grace traipsed around the countryside in all sorts of weather, but that didn’t mean it wasn’t a trial. She really should have taken up William, the viscount Blackthorn, on his offer to supply her with a horse-drawn chaise. How she would find time to care for a horse was beyond her. There were so few hours left in her day already, certainly not enough for a decent night’s sleep on the rare occasion she wasn’t called out to assist with a birth or an emergency. If the viscount knew the reason for her reluctance, he would probably offer to pay for a stable boy to assist her. But Grace didn’t like to feel beholden—not even to her best friend’s husband—although it was somewhat unavoidable, considering he now funded her work.

Startled by a horse’s whinny, she looked over her shoulder to see—as if conjured from her imagination—just the sort of hooded chaise William had suggested would be suitable for her needs. Unfortunately, the driver was more likely to appear in her nightmares than her daydreams. 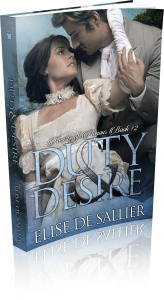 “Get in. You can ride with me the rest of the way up to the manor.”

Grace bristled at her unwelcome rescuer’s tone even as the wind tugged at the ribbons of her bonnet. Personable in appearance, with golden hair and a close-trimmed beard, Mr Loring was already well-respected by the local populace, though he had a knack for rubbing Grace the wrong way. If she were a cat, she would have hissed.

“Don’t dawdle, Miss Daniels,” he added in his typically autocratic manner. “There’s no point getting any wetter than you already are, unless you enjoy impersonating a drowned rat?”

Grace narrowed her eyes. She would have given a great deal to be able to turn her back on the obnoxious man and keep walking, but a not-so-distant clap of thunder heralded a strengthening in the storm. If only she hadn’t misread the weather.

“Oh, very well,” she muttered, clambering aboard with little of the attribute for which she was named evident in either movement or demeanour. To make matters worse, the bench seat was barely wide enough to accommodate them both. Leaving a respectable distance between them simply wasn’t possible, as she was forced to squeeze into the narrow space between the sidewall and Mr Loring’s immovable thigh. Thankfully, he made no comment about her damp skirt pressing against him, merely jerked his chin towards the prancing bay gelding.

“I’m sorry I couldn’t climb down to assist you, but Ned’s hard to handle in this weather.”

After placing her bag next to her feet, Grace gave him a withering glance. “That would have been unnecessary, as I am quite capable of getting into a vehicle unaided. It also would have been unwise, as it’s plain to see you need to keep both hands on the reins lest your horse bolt. I’ve no desire to be bowled over and left facedown in the mud.”

“Neither do I, which is why I wasn’t fool enough to attempt the manoeuvre.” Mr Loring huffed a breath while urging his horse to trot up the steep, muddy road that led to Blackthorn Manor. “I was merely trying to explain my less-than-gentlemanly behaviour.”

“Since we both know I’m not a lady, the gesture would have been wasted. Unless you’re trying to convince me you would show the same courtesy to your average, run-of-the-mill servant?”

“If a woman needed my help, then I would render assistance regardless of her station,” he replied, biting off each word as if displaying the early signs of lockjaw.

While the man was as irritating as a prickle in one’s shoe, Grace couldn’t deny she received an inordinate amount of pleasure from goading him.

A great believer in living happily ever after, Elise began her lifelong obsession with the romance and paranormal genres when she was far too young to be reading either. After more than thirty years of marriage to her very own romantic hero, she now knows great relationships don’t just happen, they take work . . . which doesn’t mean writing about them can’t be a whole lot of fun!

While raising a family, Elise established a career as a counsellor and family therapist. Seeking an escape from the stresses of her work, she discovered the world of fan fiction, and her timid writer’s muse made its voice heard. After 2.3 million hits, 20,000 reviews, and an e-mail from an acquisitions editor at The Writer’s Coffee Shop Publishing House, her life found a new and fascinating direction.

~~CONNECT WITH THE AUTHOR~~

Praise for Passion and Propriety, Hearts of Honour, Book 1

“I cannot recommend this author, or her book, highly enough to anyone who is a fan of Regency romance or who would like to dabble in the genre to see if it’s for them, because believe me, after reading this you would definitely be a convert!” Lily Loves Indie

“This is probably one of my favorite historical romances I have read this year.” Jen, Red Hot Books

“I’ll definitely be picking up more books by this author and can’t wait for the next instalment of this series which stars Hannah’s friend, Grace.”Amy Alvis, Historical Romance Lover

“I loved it. That could be my entire review, right there. But I need to gush a bit more. A wounded hero. A woman with a backbone and caring heart. A bit of angst as I wonder if they will overcome the obstacles that stand in their way of true love…. The flow of the story was natural, not rushed, and I enjoyed every page. I’m very happy to hear that there will be more in Ms. de Sallier’s Hearts of Honour series. I want the next one now!” Kathie, First Page to the Last Book Reviews

“This is the third book I’ve read by this author and I couldn’t help falling in love with de Sallier’s characters once again. I was completely taken into the story not just by Hannah and William, but by the secondary characters at the same time… If you enjoy Regency Romance, you will love Passion & Propriety.” Lindsey Gray, Author on Author Book Reviews