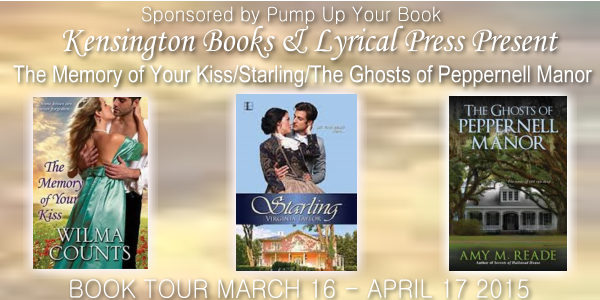 The Memory of Your Kiss by Wilma Counts

When her father falls gravely ill, eighteen-year-old Sydney Isabella Waverly dutifully agrees to marry the earl whose estate borders her family’s modest country home. But on a trip to Bath before she weds, Sydney meets the enigmatic, heroic Captain Zachary Quintin, with whom she feels an unmistakable mutual attraction. Still, they have no choice but to part ways, regretting what might have been. Sydney cannot know that one day they will meet again under vastly changed circumstances, that Zachary will play an unexpected role in her life—and that the man she never forgot still ignites her heart. All that will remain is to find out if he feels the same way…

Set in 1811 England. “The Memory of Your Kiss” is an interesting tale with a bit of unqiueness, secrets, lost love and second chances. A unqiue tale, with many facets to the characters and the storyline. An enjoyable read.

*Received for an honest review from the publisher and Net Galley * 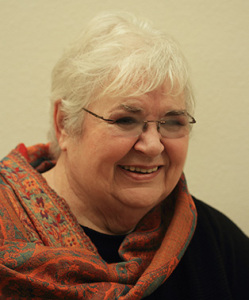 Wilma Counts spent her formative years in Dora, Oregon, a location Germans would call a “dorf” since it was not, at the time, large enough to qualify as even a village. This was in the age of “Leave it to Beaver”, though television reception was not available that far out in the boonies. She attended high school in Myrtle Point, a logging-farming town twenty miles away. Later, she attended what was then known as Oregon College of Education in Monmouth, Oregon (now Western Oregon State University).

Armed with a BS degree in secondary education, she taught English for six years in Oregon (Bend, Astoria, and Gresham). Then she joined the Department of Defense Dependents’ Schools (DoDDS) in which she taught English, world history, and U.S. Government to military dependents, first for one year at the Navy base in Guantanmo, Cuba, then on an Army base in Kaiserslautern, Germany, and finally on an Air Force base in Ramstein, Germany. During this time, she also earned a master’s degree in International Relations from Alabama’s Troy State University. With the troop drawdown in the ‘90s, she seized the opportunity to retire early and returned to the States.

During her stint with the DoDDS, Wilma taught all levels of high school English as well as social studies classes, but most of her work was with 12th grade students. She was English department chair for several years. She especially enjoyed working with students in Advanced Placement English and U.S. Government classes—as well as working with those in the Model United Nations program. For about ten years she traveled every January with groups of 20-30 students to the International MUN conference in The Hague, The Netherlands. She loved her students (almost all of them), but found grading papers to be pure drudgery. She was twice nominated by former students to be included among Who’s Who in American Teachers.

Model United Nations trips was not her only travel with groups of high school students, She also led study tours to England, Russia, Czechoslovakia, Italy, and Tunisia. An exchange program with a school in Ivanovo, Russia, led to two important developments: (1) a humanitarian aid project that ended with American military communities in Germany donating nearly 80 tons of clothing and foodstuff to Ivanovo two years after the fall of the Berlin Wall, and (2) the Russian school’s involvement with Model United Nations which has since expanded to include schools in Moscow and St. Petersburg.

Wilma has also traveled widely on her own: England and Scotland; most of continental Europe; India and Pakistan; Peru, Ecuador, and Colombia; and just a touch of the Far East—Burma (as it was then called), Hong Kong, and South China. Lots of weekend getaways to France, Belgium, and Luxembourg and The Netherlands. Travel remains a keen interest, though largely of the armchair variety in recent years. She plans a return trip to Germany next year.

You can take the teacher out of the classroom—but not for long! Shortly after retiring from DoDDS, Wilma took a part-time position teaching classes in freshman English at Western Nevada College in Carson City, Nevada. At the same time, she realized a life-long dream of becoming a published writer. Eleven Regency novels and two novellas (all with Kensington) are closely linked to her love of Jane Austen’s work. In addition, she has a novel set in WWII, In Enemy Hands, born of her love of modern European history. She is among the contributors to the ALWAYS LOSTexhibition (currently touring nationwide), a tribute to the sacrifices of men and women who have served in Iraq and Afghanistan.

Today, Wilma devotes her time largely to writing and reading. She loves to cook, but hates cleaning house. She has never lost her interest in literature, history, and international relations. She spends a fair amount of time yelling at the TV. She maintains contact with many friends from each of those lives mentioned above. She is an active member ofLone Mountain Writers in Carson City.

She considers herself to be the second most computer illiterate person in the universe, but she loves hearing from friends, former students, and readers at wilmacounts@att.net.

An aspiring dressmaker, orphaned Starling Smith is accustomed to fighting for her own survival. But when she’s offered a year’s wages to temporarily pose as a wealthy man’s bride, she suspects ulterior motives. She can’t lose the chance to open her own shop, but she won’t be any man’s lover, not even handsome, infuriating Alisdair Seymour’s…

To prevent his visiting sister from parading potential brides in front of him, Alisdair has decided to present a fake wife. He lost his heart once, and had it broken—he doesn’t intend to do it again. But stubborn, spirited Starling is more alluring than he bargained for, and Alisdair will risk everything he has to prove his love is true…

Set against the sweeping backdrop of 1866 South Australia, Starling is a novel of cherished dreams and powerful desires, and the young woman bold enough to claim them both…

South Landers #1 is an interesting start to a new series. An interesting tale of desperation, secrets, empowerment of one woman to take charge of her destiny and finding true love.  While, a bit slow at times, it picks up nicely to be an interesting tale with many facets to carry the story alone. It is set against the unique backdrop of 1866 South Australia. Ms. Taylor did an excellent joy of giving the reader insight into the times and status of South Australia during the 1860’s. An enjoyable read and one with a satisfying ending. I would read more from this author and look forward to doing so. I look forward to the next installment.

After a stint at the South Australian School of Art, I worked for an advertising agency,  re-trained as a nurse/midwife, and then married the man of my dreams. Two children later, I began writing romance. While awaiting publication, I painted and designed various theatre sets with a fellow School of Art graduate.In 2013 I sold my first novel-length story. 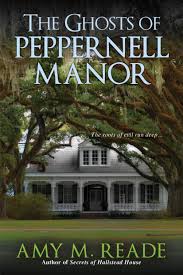 “Do you know what stories Sarah could tell you about the things that happened in these little cabins? They’d curl that pretty red hair of yours.”

Outside of Charleston, South Carolina, beyond hanging curtains of Spanish moss, at the end of a shaded tunnel of overarching oaks, stands the antebellum mansion of Peppernell Manor in all its faded grandeur. At the request of her friend Evie Peppernell, recently divorced Carleigh Warner and her young daughter Lucy have come to the plantation house to refurbish the interior. But the tall white columns and black shutters hide a dark history of slavery, violence, and greed. The ghost of a former slave is said to haunt the home, and Carleigh is told she disapproves of her restoration efforts. And beneath the polite hospitality of the Peppernell family lie simmering resentments and poisonous secrets that culminate in murder—and place Carleigh and her child in grave danger…

“The Ghosts of Peppernell Manor” is set outside of Charleston, South Carolina. Filled with secrets, a bit of history of slavery, violence, murder, danger and greed. With a touch of Southern flair, plenty of family drama, mystery and family intrigue, readers will find a Chick Lit like tale, not much romance and ghosts are non-existent, which is a bit misleading. While, the story was interesting, I could not connect with the characters. Readers who are looking for a ghost tale may be disappointed. This story is more of a mystery with a bit of whodunnit flair and lots of family drama.   Not a re-read to me, but overall an interesting tale. Please read and form your own opinion of this story.

*Received for an honest review from the publisher via Net Galley* 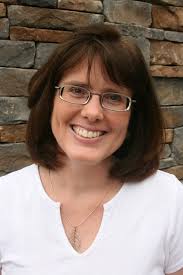 Thanks for visiting!  I grew up in Northern New York, just 30 miles from the St. Lawrence River.  I live in New Jersey now with my husband, three kids, dog, and two cats, just a few miles from the Atlantic Ocean.  I love being near the water, whether it’s a river or an ocean or just a stream.  My favorite place on Earth is Hawaii, where I’m surrounded by the blue waters of the Pacific.

I also love wine and music.  You’ll find wine recommendations on this website from my latest favorites, as well as playlists to go along with my books.

Please visit my blog at http://amreade.wordpress.com/

Books featured at 3 Partners in Shopping

Books featured at Review From Here

Books featured at From Paperback to Leatherbound

All authors guest blogging at Bent Over Bookwords

All authors guest blogging at All Inclusive Retort

All authors guest blogging at Queen of the Night Reviews

Books featured at The Dark Phantom

Starling reviewed and Books featured at Romance for Every World

Amy Reade interviewed at Chosen By You Book Club

Books featured at First Page to the Last

Starling and The Memory of Your Kiss reviewed at Written Love

The Ghosts of Peppernell Manor reviewed at I’m Shelf-ish

Guest blogs from all authors at Inkslinger’s Opus

Books featured at Confessions of a Reader

Books featured at The Literary Nook

Guest blogs from all authors at My Book Addiction and More