CONGRATULATIONS ON YOUR NEWEST RELEASE DAY!!

Finally, MY HIGHLAND SPY, is here!! 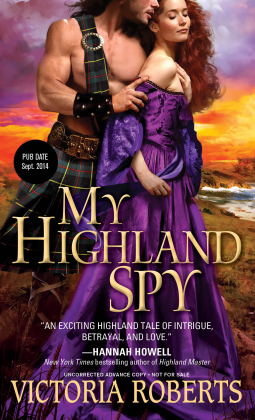 THIS HIGHLAND LAIRD WON’T BOW TO THE CROWN

Laird Ruairi Sutherland refuses to send his only son away to be educated by the English. And he most definitely will not appear in Edinburgh to pay homage to a liege who has no respect for Scotland or its people. So he does what any laird would do―he lies to the king. The last thing Ruairi expects is a beautiful English governess to appear on his doorstep.

Lady Ravenna Walsingham is a seasoned spy who is sent to the savage Highlands to uncover a nefarious plot against the Crown. Playing the part of an English governess―a job easier said than done―she infiltrates the home of Laird Ruairi Sutherland, a suspected conspirator.

IF SHE DOESN’T BETRAY HIM FIRST

Ravenna soon discovers that the only real threat Sutherland poses is to her heart. But will the proud Highland laird ever forgive her when he discovers the woman he loves is an English spy?

Award-winning author Victoria Roberts writes Scottish historical romances about kilted heroes and warriors from the past. She was named by RT Book Reviews as “one of the most promising debut authors across the genres” and was also a 2012 and 2013 RT Reviewers’ Choice nominee. Victoria is a member of Romance Writers of America® and several local chapters, as well as a contributing author to the online magazine Celtic Guide. When she’s not plotting her next Scottish adventure, she’s dragging her clan to every Scottish festival under the sun.

For My Thoughts on MY HIGHLAND SPY, please visit: http://mybookaddictionreviews.com/2014/08/31/my-highland-spy-by-victoria-roberts-review/

What an awesome read!!

One Reply to “Release Day~ MY HIGHLAND SPY~ VICTORIA ROBERTS”