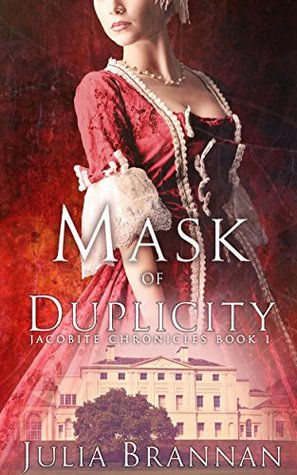 Following the death of their father, Beth’s brother Richard returns from the army to claim his share of the family estate. However, Beth’s hopes of a quiet life are dashed when Richard, dissatisfied with his meagre inheritance and desperate for promotion, decides to force her into a marriage for his military gain. And he will stop at nothing to get his way.

Beth is coerced into a reconciliation with her noble cousins in order to marry well and escape her brutal brother. She is then thrown into the glittering social whirl of Georgian high society and struggles to conform. The effeminate but witty socialite Sir Anthony Peters offers to ease her passage into society and she is soon besieged by suitors eager to get their hands on her considerable dowry. Beth, however, wants love and passion for herself, and to break free from the artificial life she is growing to hate. She finds herself plunged into a world where nothing is as it seems and everyone hides behind a mask. Can she trust the people professing to care for her?

The first in the series about the fascinating lives of beautiful Beth Cunningham, her family and friends during the tempestuous days leading up to the Jacobite Rebellion of 1745, which attempted to overthrow the Hanoverian King George II and restore the Stuarts to the British throne.

Julia has been a voracious reader since childhood, using books to escape the miseries of a turbulent adolescence. After leaving university with a degree in English Language and Literature, she spent her twenties trying to be a sensible and responsible person, even going so far as to work for the Civil Service. The book escape came in very useful there too.
And then she gave up trying to conform and resolved to spend the rest of her life living as she wanted to, not as others would like her to. She has since had a variety of jobs, including telesales, teaching and gilding and is currently a transcriber, copy editor and proofreader. In her spare time she is still a voracious reader, and enjoys keeping fit and travelling the world. Life hasn’t always been good, but it has rarely been boring. She lives in rural Wales with her cat Constantine, and her wonderful partner sensibly lives four miles away in the next village.
Now she has decided that rather than just escape into other people’s books, she would actually quite like to create some of her own, in the hopes that people will enjoy reading them as much as she does writing them.

MASK OF DUPLICITY by Julia Brannan is an exciting new Scottish Historical Romance set during the 1740’s. Book 1 in this new and fantastic series of “The Jacobite Chronicles” and what a beginning.

“The first in the series about the fascinating lives of beautiful Beth Cunningham, her family and friends during the tempestuous days leading up to the Jacobite Rebellion of 1745, which attempted to overthrow the Hanoverian King George II and restore the Stuarts to the British throne.”

Meet Beth Cunningham, her brother Richard, Sir Anthony Peters, and a wonderful, albeit,  treasonous cast of characters, where some have a mask of duplicity.

Fast paced, tale that is well written, with passion, action, fights, sensual tension, duplicity, treason, and finding a HEA for Beth. A must read for Historical Romance fans who enjoy action, adventure, and yes, treason. The Jacobite Rebellion pitted brother against brother, committed many treasonous acts all in the name of restoring the Stuarts to the British throne.

The cast of characters is long, but a necessity to help carry the story forward. The reader is easily caught up in the story, the lives of the characters and the depth of the story.

Ms. Brannan is a new author to me, but I look forward to reading more of her “Jacobite Chronicles”. While, “Mask of Duplicity” had a satisfying conclusion, I would say it is a continuing tale, as many questions are left unanswered. Not necessarily a cliffhanger, but a continuing storyline, I look forward to finding out Beth’s fiance’s true identity and issues this will cause between her and others.

Well researched. I would strongly recommend “Mask of Duplicity” to fans of Scottish Historical, The Jacobite Rebellion and uprising, Historical Romance fans, and fans of Scottish-British history. A fascinating story with a long cast of characters who will capture your interest and hold your attention. A true treasure! An enjoyable and satisfying read and one I would strongly recommend.