Self-driving vehicles finally arrive. But so do the terrorists.

A thought-provoking thriller about artificial intelligence and the self-driving revolution.

and trapped in a terrifying life-threatening situation.

Fed up with slogging through the treacherous LA traffic to get to work, Jake Bendel and a cunning team of experts create a roadway system for self-driving cars — preventing thousands of traffic deaths and reducing commute times from hours to minutes.

For three months, no traffic congestion. No accidents. No fatalities. People finally feel safe in their cars. But should they?

Especially when the dark side of humanity sees this as a chance to destroy the United States.

A Syrian terrorist group weaponizes the system and devises a scheme to kill more Americans in one day than the 407,000 + U.S. soldiers killed in World War II.

Viktor, a tormented psychopath and the mastermind behind this ruthless attack, is driven by the voices of his dead mother and Allah …who guide his every move.

While he and his brothers mercilessly annihilate Americans in the name of the Jihad, Viktor plants evidence that convinces the public Jake is the architect behind the most heinous terrorist attack in U.S. history.

But one rogue FBI agent believes Jake is innocent. Together they unearth a mole deep inside the FBI, go off the grid, and hash through a trail of hidden clues to stop Viktor from slaughtering millions of unsuspecting American drivers in a matter of minutes.

The clock is ticking. Can they stop him in time to prevent another savage bloodbath?

Civil Terror: Gridlock will grab you by the throat and pull you into a vicious struggle that will define the fate of the world for generations to come.

J. Luke Bennecke is a native Californian and a 25-year veteran civil engineer who has spent his career helping people by improving transportation systems in Southern California. Like most commuters, he longs for the day when traffic congestion is a thing of the past and highway fatalities are a distant memory. He has a BS in civil engineering from Cal Poly Pomona, an MBA from Cal State San Bernardino, a private pilot’s certificate, and is a partner in the successful firm, Southstar Engineering, based in Riverside.

He has been happily married to the woman of his dreams, Tammy, for two-and-a-half-decades and enjoys spending time with his grown daughters. 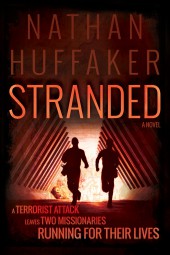 Kazakhstan is on the brink of civil war, and Elders Schofield and Johnson need to get out ASAP. But when their train explodes, all the evidence points to the missionaries! With terrorists on their trail and the whole country against them, the elders’ only refuge is the US Embassy in Astana—800 miles away. Fans of “The Saratov Approach” will love this jaw-dropping thriller.

Oh, me, what a Thriller! Two missionaries running for their lives, encounter Terrorists, and are on the run for their lives. Fast paced, action packed tale of terror, terrorists, civil war, seeking refuge on the run and intense, emotional turmoil.
Fans of Thrillers, and reading material published by the Latter Day Saints, will enjoy this action thrill ride. Well written.
An enjoyable read!

**Cross-posted on My Book Addiction and More**

In the pitch-black cargo hole of the Pakistani airline freighter crossing the Atlantic, a wooden crate filled with levers for a weaving machine also had another object buried inside. If it makes it to its delivery point, an American city would become uninhabitable for a century. In this chilling thriller, Retribution is more than the story of a deep-cover mission to stop a terrorist with a core stolen from an Islamabad nuclear weapon. Here, the operative does much more to flush out the target than a hunt and chase. He becomes a carrier of a highly contagious strain of a deadly disease. In this oh so authentic story, author Andy Harp draws upon his experiences as a Marine who has served across the globe to create a uniquely real novel filled with breakneck thrills and plot twists. With action that flies from New York to London, from Peshawar deep into the mountains of the Hindu Kush, and from Islamabad to Chicago, Retribution weaves political conspiracy and a perilous, intelligence operation, hi-tech military technology and deadly current events, all with the crucible of a determined Jason Bourne like character in conflict with just as determined a killer, into a classic “mission” thriller that delivers the kind of nail-biting suspense, realism and a kicker surprise at the end that is in the style of Ludlum, and the best of Thor and Flynn. The story is engrossing, the hero is remarkable, and the personal cost he pays for both his survival and success changes the man.

–This text refers to an out of print or unavailable edition of this title.

Pinnacle, an imprint of Kensington

Anderson Harp served 30 years in the U.S. Marine Corps, rising through the ranks to become a Colonel.  His stations included:  the Pentagon, South Korea, Central America, the Persian Gulf, Europe, Camp Pendleton, the Marine Mountain Training Center, Fort Benning, Fort Sill, and Camp LeJeune. He has served as the Officer in Charge of Crisis Action Team for Marine Forces Central Command. His decorations include the Defense Meritorious Service Medal, Meritorious Service Medal and Navy Commendation Medal. As an officer in the Marine Corps Reserve, he was mobilized for Operation Enduring Freedom and served with MarCent’s Crisis Action Team.  Anderson Harp lives with his family in Columbus, Georgia.

My Thoughts on this title over on our sister site, MyBookAddictionReviews

Please stop by and check it out!!

(Sponsored by the publicist)

We are offering 1 lucky commenter a chance to win a copy of RETRIBUTION by Anderson Harp.