Join Mike Thomas, author of the young adult adventure novel, The Mysterious Treasure of Jerry Lee Thorton, as he tours the blogosphere August 5 through September 27, 2013 on his first virtual book tour with Pump Up Your Book! 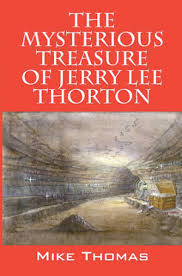 ABOUT THE MYSTERIOUS TREASURE OF JERRY LEE THORTON

What does a guy do when his best friend starts doing things that are completely out of character? In the case of Luke McAllister, you can’t do anything – until you figure out exactly what it is that is different.

The fact that his best friend is a girl complicates matters a heap. Nothing makes sense when RaeNell Stephens, the girl that has “the best curve ball he’s ever seen”, starts blushing and acting like a durned female. All of this at the beginning of the ‘summer to end all summers’ too. This is the summer that Luke, RaeNell, and their friend Farley Midkiff set out to locate, and cash in on a rogue Civil War soldier’s stolen one million dollar Union payroll.

Undaunted by thousands of scholars and fortune seekers having looked unsuccessfully for the treasure for a hundred years, the three twelve-year-old friends search diligently for themselves. What they find is an adventure that leads them on a spiraling path of discovery.

They discover newness in themselves, their families, and the closeness of a small southern community in the process. Luke wrestles with his morality, ethics, and his slowly emerging awareness of the difference between boys and girls. He also discovers that his late father left him an incredibly large legacy of duty, fidelity and caring for those around him.

The telling of the story takes place in imaginary New Caledonia County, NC in 1966. The deep rural traditions, vernacular, and ways of life of the region and community are portrayed in great detail as the story unfolds.

Mike Thomas is a southern writer. He grew up in the foothills of the Blue Ridge Mountains in North Carolina where he learned a lot about family, traditions, and the genteel lifestyle most southerners enjoy. The richly eccentric folks of his youth have become his characters in today’s books and stories.

Mike began as a newswriter, editor, columnist, reporter, and speechwriter before switching to the role of Critical Care Registered Nurse. He traveled nearly every corner of the world as a vagabond contract nurse before resettling in North Carolina a few years ago.

He lives with Bobby, his desktop computer, and Rachel his laptop, in Halifax County, NC.

“That’s all I need,” He says, “Just my computers and a bit of focus. Then we can make up worlds we could only have dreamed of last week.”

You can visit him at www.mikethomas-writer.com

Wednesday, August 7 – Book featured at Between the Pages

Friday, August 16 – Interviewed at Pump Up Your Book

Tuesday, August 20 – Guest blogging at The Story Behind the Book

Tuesday, August 27 – 1st chapter reveal at As the Pages Turn

Wednesday, August 28 – Interviewed at Between the Covers

Thursday, September 5 – Guest blogging at Between the Covers

Wednesday, September 11 – Interviewed at Beyond the Books

Thursday, September 12 – Guest blogging at Straight From the Authors Mouth

Friday, September 13 – Guest blogging and 1st chapter reveal Queen of All She Reads

Monday, September 16 – Book featured at My Book Addiction and More

Thursday,September 19 – Interviewed at As the Pages Turn

Monday, September 30 – Book featured at A Room Without Books is Empty

Thanks for stopping by today!!!