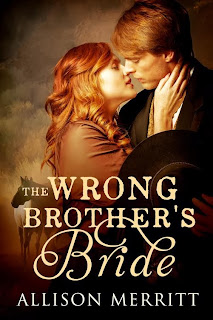 Title: The Wrong Brother’s Bride
Publisher: Lyrical Press/Kensington Publishing
Genre: Historical romance
Word count: approx. 60,000
Publication date: April 7, 2014
Blurb:
A haunted past, a marriage of convenience…a love for a lifetime?
After a tragic accident leaves Loyal Redfearn alone and pregnant, she writes to her deceased fiancee’s ne’er-do-well brother, August O’Dell. Her hope is he’ll save her beloved home. What she doesn’t expect from him is a proposal so soon on the heels of his brother’s death. Although they grew up together, she’s never thought of August as the man she would marry, even as a means to save face with her family and friends.
Although returning to the township where August spent his troubled youth means facing the past, he sees an opportunity to redeem himself in the eyes of the woman he’s loved since boyhood. They agree the marriage is in name-only, but August works to earn Loyal’s trust and waits for the day she’ll see his hard work as proof that she didn’t marry the wrong brother after all.
When evidence from a crime committed years ago points to August as the culprit, he and Loyal must face the reality that their newly forged family may be torn apart.

She hugged Jeremiah’s pillow, breathing his lingering scent. The aching wound left by his loss gaped wide.
In the kitchen, she heard a floorboard squeak. Loyal choked back another sob, holding her breath as she waited for August to return to his room or come to hers. The curtains fell against the window as the breeze died.
“Loyal?”
August’s soft call made her tense. She could ignore him, pretend she hadn’t heard, but too many nights she’d been alone. Grief brought with it some puzzling emotions. It had been a relief when their friends left her alone at the farm after the funeral. And so lonely she thought she’d go mad if she didn’t hear another human voice. Trying to sort through what she felt now made her long for the sleep she’d missed the last week.
“I know you’re awake. I heard you crying.”
She sniffed, wiping her eyes with the back of her hands. “I thought you were asleep. I didn’t wake you, did I?”
“No. May I come in?” His voice was muffled through the door. “I’d like a word with you.”
“Just a moment.” One of Jeremiah’s flannel shirts draped across the foot of the bed where she’d left it this morning. She drew it over her shoulders and slipped her arms through the sleeves, pulling the loose ends around herself. Striking a match, she lit the lamp on the bedside table. “Come in.”
The door opened and August filled the frame. In the lamplight, his eyes seemed bluer than she remembered, like the sky after rain. Both O’Dell brothers had gotten their looks from their father, but August stood straighter than his old man ever had. His wide shoulders strained against his tan shirt. He scratched the scruff shadowing his jaw.
“I can’t sleep.”
She frowned. There must be something she could do to make him more comfortable. “Is it the bed? Do you need different blankets? Or maybe it’s because you didn’t eat.”
He shook his head. “Wandering mind. It’s partly because we got off on a bad foot. It isn’t easy to admit I’m wrong. I shouldn’t have acted like you don’t belong here. Seeing you brought back memories about the way your daddy treated us. And how Jeremiah stopped having time for me when he met you.” August swallowed. His Adam’s apple jumped in his throat. “Even if you don’t think marriage is right, there’s a place for you here. I’d like to help raise your son or daughter the way he would have wanted. That’s all.”
Loyal couldn’t speak. Surely the world was ending if August was apologizing for his actions. His father had never admitted his wrongs in his life. Her worry that August would follow his father’s path faded.
“That’s all,” he repeated and backed into the hall.
“Wait.” She swung her feet to the floor and padded across the room, craning her neck to look at him. “Thank you, August.”
“I heard you crying and I thought…”
He must have been sitting in the kitchen before he knocked on her door. She waved her hand, dismissing his reasoning. “I wasn’t crying because of you. Lately I can’t help it.”
He seemed a little more at ease, though he would probably grow sick of her tears before a week had passed. She had.
She reached out, slipping her hands beneath his arms. He didn’t move for a moment, even when she clasped her hands behind his back. Her cheek pressed against the soft material of his shirt and she closed her eyes. August wrapped his strong arms around her shoulders, and his breath stirred her hair. She clung to him as though she was a leaf and he was the root, an anchor in the storm.
For a moment, everything was alright. She had the farm, a child growing beneath her heart, and a strong partner to care for her. She stepped back, knowing what she had to do now.
August’s arms fell at his sides. His face changed and she was sure she saw the briefest flash of disappointment.
“Good night, Loyal.”
A knot formed in her throat. Jeremiah was gone, but his brother was offering to take his place. She inhaled, catching a faint whiff of leather that clung after his long ride and a scent that was all his own.
“Wait.”
He stood unmoving, watching her with a bemused gaze.
“August, I’ll marry you. For the baby. As long as we’re clear that Jeremiah is the father and we’re just friends.” Her throat scratched as she forced the words out.
“In name only.” His face was guarded.
“Yes.”
“Alright. Is your daddy—”
She dug her fingernails into her palm. “He won’t perform the ceremony, much less come.”
He nodded. “I’ll ask someone else.” For a moment he was quiet. “It’ll be alright, Loyal. I’m here.”
When he turned, she didn’t stop him. Tears rolled down her face. He couldn’t know Jeremiah had said almost the same words when she told him she was pregnant.

My thoughts coming soon on our sister site

One Reply to “THE WRONG BROTHER’S BRIDE~ ALLISON MERRITT…SPOTLIGHT”